Learn how to make delicious Manhattan Clam Chowder. It’s a tomato-based soup loaded with clams, potato, and bacon, with a little spicy kick. This version is super-easy to make and is ready in under 15 minutes.

I once ordered Manhattan Clam Chowder at a restaurant thinking that the word Manhattan meant it would be fancier than the clam chowders I’d had previously. When the waiter brought a bowl of red soup I said,  “What’s this? I ordered Clam Chowder.”

He was confused and so was I.

What’s The Difference Between New England and Manhattan Clam Chowder?

It turns out that Manhattan Clam Chowder is not fancier than the New England Clam Chowder I’d been used to. They’re different styles of soup. Different but equally good. I had been mistaken to think that because it was called “chowder” it would be white and creamy.

There is a lot of debate out there about which one is better, New England or Manhattan. I think it’s a matter of taste, really. And of the recipe. I’ve had New England versions that are too thick and stodgy, almost pasty. If I’m comparing that to a typical Manhattan version, I choose the Manhattan with it’s brighter flavors and less floury tasty. However, I’ve had some really incredible New England Clam Chowder before, like this one over here, and I have to say that I think that is probably my favorite.

What is Manhattan Clam Chowder

This seafood stew originated in fishing communities of Portuguese immigrants in Rhode Island. These residents would often head to the fish market in New York City, thus the Manhattan name. It’s a hearty and filling soup that easily serves as a complete meal.

Unlike the creamy dairy-based New England Clam Chowder, this is a tomato-based soup. I’ve used canned diced tomatoes for that tomato part. It also usually has a bit of heat from red pepper flakes or hot sauce.

Is It Really A Chowder?

It turns out that the word “chowder” comes from the French word chaudière, which means “cauldron.” It therefore doesn’t mean a creamy soup. Instead, chowder seems to mean that the soup is chunky and usually contains potato. So then, Manhattan Clam Chowder really is a chowder and is a type of clam chowder.

What’s Manhattan Clam Chowder Made Of?

Whereas New England clam chowder is rich and creamy. Manhattan Clam Chowder has the acidic sweet bite of tomato and a touch of spicy heat. The acidity from the tomatoes really counters the salty brine in the broth and makes the soup have a sweeter flavor than its creamy counterpart.

In addition to clams and tomatoes, it also often has some salt pork or bacon. I’ve used pre-cooked bacon in the recipe below so that you can save some time. But, if you don’t want to buy it pre-cooked, you can fry some up. The best part about that is that you can then use the bacon fat instead of the oil and butter to sauté the potatoes and other vegetables.

Potatoes are also a staple in both kinds of clam chowder. I think that’s what makes the soup so hearty and satisfying. For this recipe, the potatoes are cut into small pieces so that they cook more quickly. If you prefer bigger chunks, you can absolutely do that, just increase the cooking time and simmer until the potatoes are fork tender.

My recipe below has onions and celery in it. Some people also put carrots and/or green bell peppers. I actually find that the soup gets too sweet with those ingredients so I skip them. But feel free to add them in if you’d like.

As to the seasonings, this chowder is known for having a bit of a kick. I’ve used a hot sauce, such as Tabasco, for that here. Many people use red pepper flakes instead. I find that when making a quick soup like this one, the red pepper flakes don’t have enough time to spread their flavor around, whereas hot sauce mixes right in. I’ve also skipped the black pepper in here because it isn’t needed with the hot sauce, but if you’re someone who always adds pepper to things, go right ahead and put in a big pinch of it.

If you want a garnish for this soup, you can use some parsley for sure. Chives are also a nice choice. Or, top the soup with a few oyster crackers to give it that restaurant vibe.

This Manhattan Clam Chowder recipe is ready from start to finish in 15 minutes. One of the ingredients that really helps this is the clam juice.

Clam juice is made by briefly steaming fresh clams in salted water and filtering the resulting clam broth before bottling. It’s sold near the canned fish in all grocery stores. It’s usually in small glass bottles.

Clam juice has a mild fish flavor. Whenever you’re making a fish-based soup, some clam juice can be used as part of the broth to add extra flavor. It will work in all fish and seafood soup, not just clam chowders.

By using clam juice for this soup, we don’t need to make a fish broth, or use fresh clams to make a clam-flavored broth. We get that from the convenient bottles from the store. It really speeds things up.

Another reason that this soup is ready so quickly is because it uses canned clams. These clams are already cleaned and cooked so you save yourself a few steps. They’re also probably familiar to you since a lot of restaurants use canned clams. This is often the case when clam chowders contain clams with no shells.

Using canned clams also means that you can have this soup anytime. Keep a few cans of clams and some bottled clam juice in your pantry to whip this up whenever you get that chowder craving.

Now, if you want to use fresh clams in this soup, you totally can. I recommend that you use about a dozen small live clams, like littlenecks or Manila clams. Keep them refrigerated after you buy them and until you use them.

You’ll still want to use the canned clams though, since that gives you lots of little clams per bowlful of soup. These ones in the shell will add some extra flavor and make for a fun presentation.

You’ll want to clean the clams like this. Then you’ll add them at the same time as you add the canned clams in the recipe below. However, you will then simmer the soup for longer, until the clams open up, which will take 7-10 minutes. If any don’t open, remove them and discard them.

Oh, and whether you use the fresh clams or not, be sure to serve your chowder with some oyster crackers on the side. Enjoy! -Christine xo

For the links to all of my 15 minute soup recipes and to read all the tips that make them delicious quickly, click here.

This clam chowder is tomato-based, not creamy. And it has a bit of kick from some hot sauce. If you’re used to a creamy clam chowder, this is a bright change. Unlike a lot of soup recipes, the potatoes are added early in the cooking process here. This is because they take awhile to get tender and so you want to give them that time.

Click the play button to listen to this short podcast episode where I explain how to make this soup, with some great tips along the way:

*If you’d prefer to cook the bacon yourself instead of buying the pre-cooked bacon, you can cook it in the microwave, like this. Or, cook it in a medium skillet over medium-high heat until crisp. Chop it up. Add that bacon when you add the canned clams. If you cook it in the skillet, also make sure that you use the bacon fat that you get from the bacon. Use 2 tablespoons of it in Step#1 above instead of the olive oil and butter. That will add extra bacon flavor to your soup. 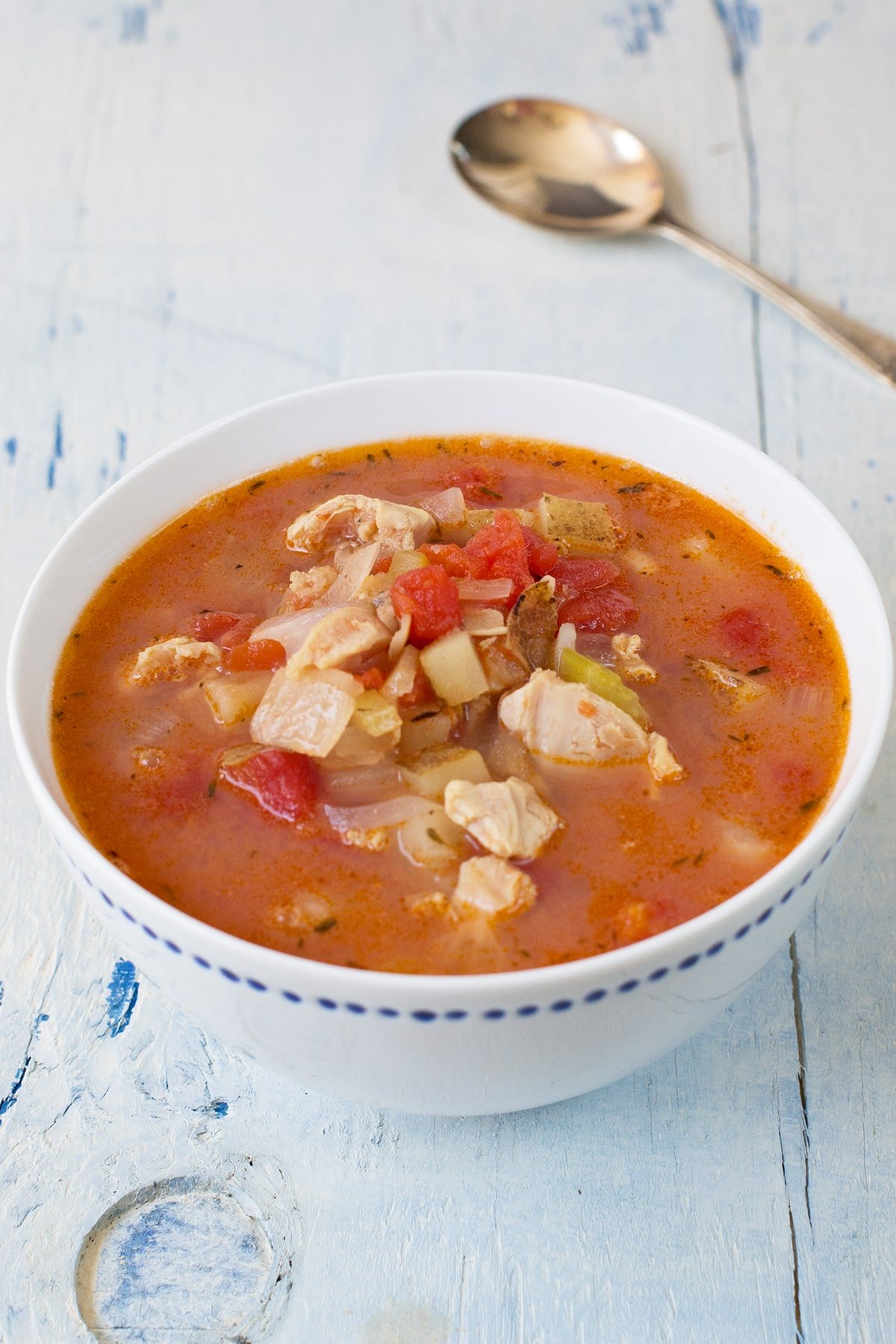 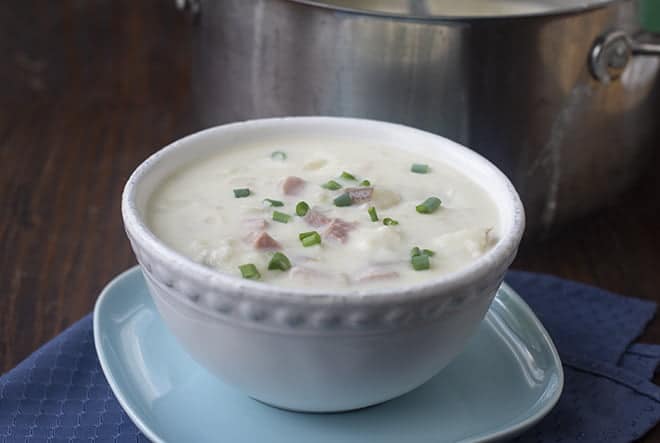 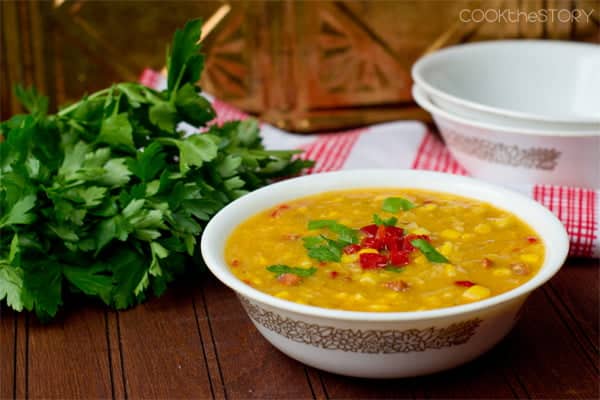 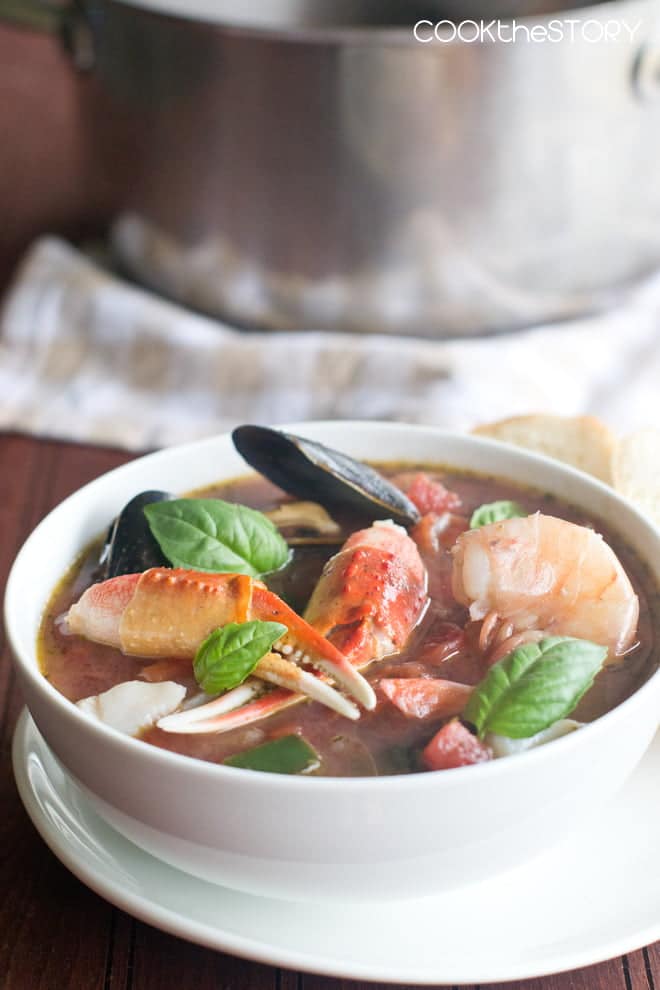