Pop open a bottle of French wine and devour the flavors of Provence with this Classic fish stew, Bouillabaisse!

Have you had Bouillabaisse before? If you have, I’m sure you fell in love with it as much as I did. If you haven’t had it before, here’s why it’s so special.

It’s a French seafood stew from the Provençal region. In Provence they use certain delicious seasonings that are highlighted in the soup and make it really tasty. These include saffron and orange. See how the white fish has a yellow color? That’s from the saffron. Nice, right? 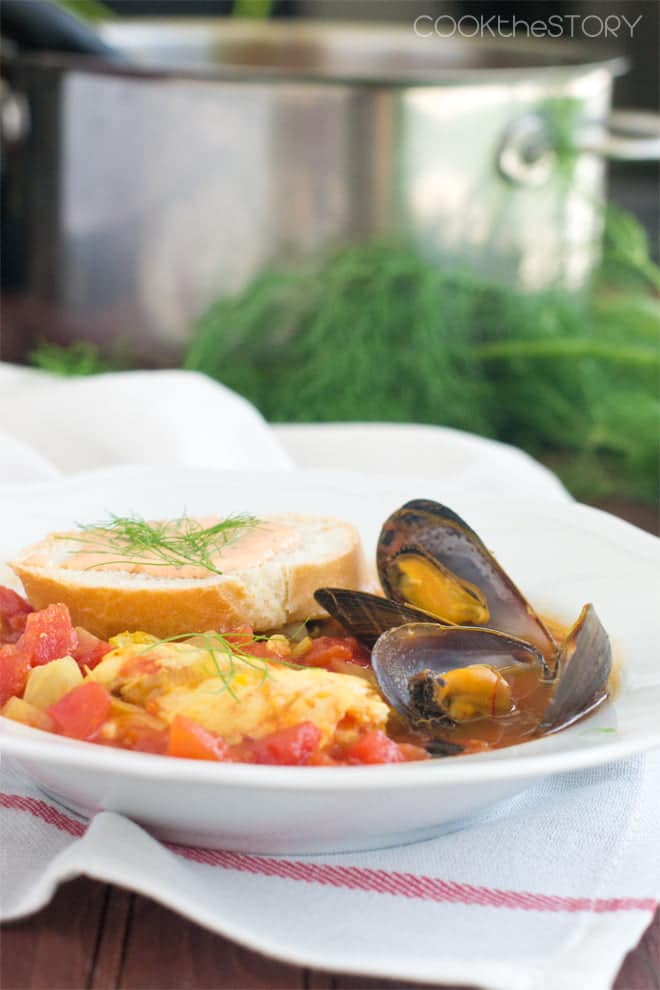 The fish is cooked in the broth. Traditionally the fish is removed from the broth and is served separately. I keep them all in the pot together. It’s just easier.

There’s one more thing about Bouillabaisse that makes it special. Actually more than special. This makes it incredible. No, beyond incredible. Insane. Insanely incredible.

It’s a sauce that you serve with the soup. It’s called rouille. You smear it on bread and then put that bread on the soup. Or, if you’re like me, you just spoon the sauce right into the soup. It’s that good.

You want it everywhere.

Need it on everything. 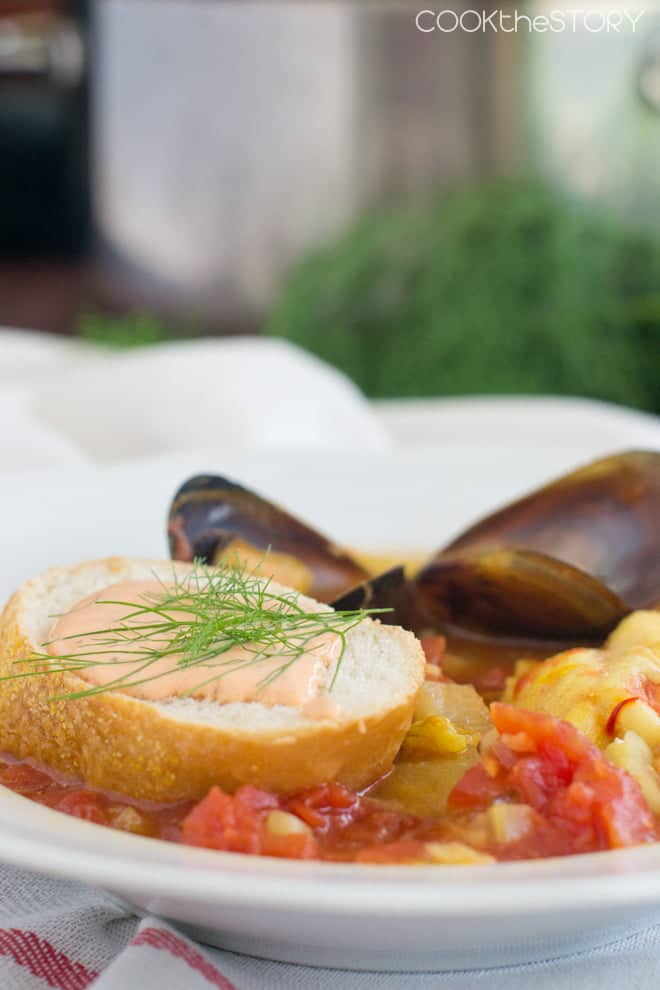 What’s so good about rouille? It’s basically mayonnaise made with olive oil with lots of garlic and some cayenne. Some people put saffron. Sometimes you see pimentos.

It’s really all about the garlic though. Lots of garlic.

The way it’s usually made is in a blender the way you would make homemade mayonnaise, by drizzling oil into the other ingredients until it emulsifies and thickens.

But as you might guess, because this Bouillabaisse is a Soupin15 recipe, I took a shortcut here. I puréed pimentos, garlic and some basil in a blender. Then I just added store-bought mayonnaise. It is seriously good. And don’t worry, this recipe makes more than you need for serving with the soup. You can use any extras tossed with pasta or as a spread on a sandwich.

(I’ve been known to just eat it with a spoon. Shh. Don’t tell anyone). 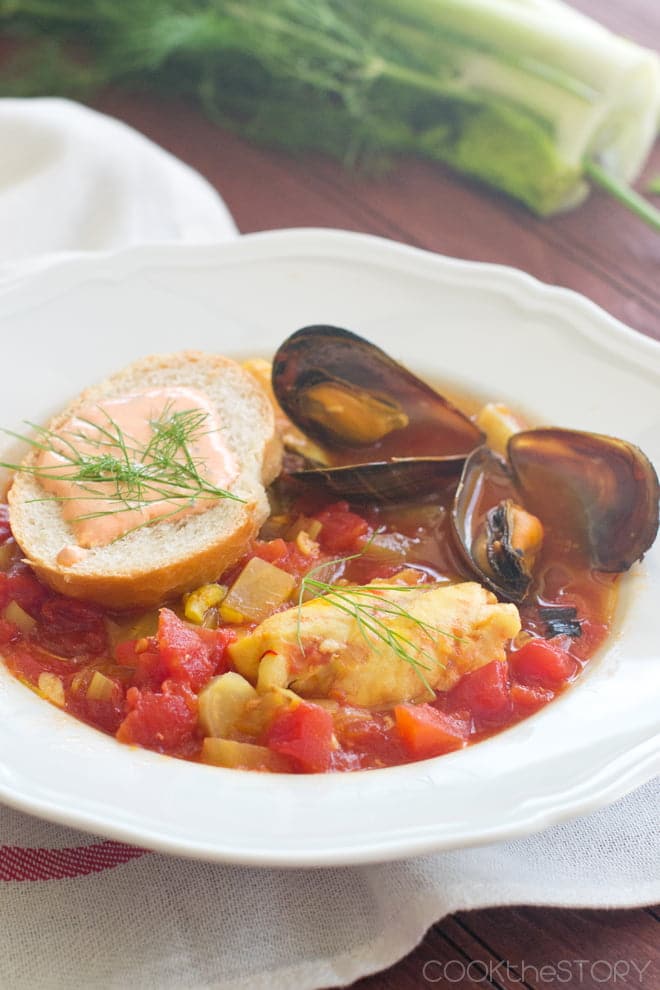 My Souper Tip for this Bouillabaisse, the thing that makes it so delicious so quickly, is to use unusual aromatics. When most North Americans make soup, we tend to start with onion, celery and carrots. Maybe some bell pepper. But there are other vegetables that make a great aromatic base for a soup. Today’s recipe uses fennel and leeks. The fennel has a mild licorice flavor and the leeks offer the dish a mild onion flavor. It turns the soup into something new and interesting. 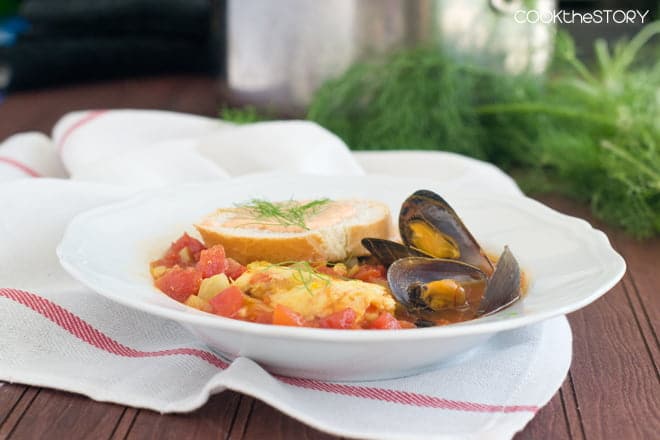 That is the last Souper Tip you’ll be getting from me because today’s recipe is the last Soupin15 recipe. If you’ve been following along, i’ve been bringing you a 15-minute soup every week for the past year. That’s 52 quick soups. To see them all along with all the Souper Tips that go with them, head over here.

It’s been a fun and challenging year. The best thing about it though is that it inspired my creativity. So much so that I’m launching a brand-new project (a brand-new website!) in August. The original concept for the site came from this soup series. But it’s not just going to be about soup. Ugh. I can’t wait to tell you about it!

Thank you for following along and for all your love and support. And stay tuned for my exciting new site!

This recipe makes extra Rouille, the garlicky mayonnaise sauce that is traditionally served with Bouillabaisse. The reason there’s extra is because you’re definitely going to want to slather extra pieces of bread in it. And maybe even drizzle some straight into your soup. 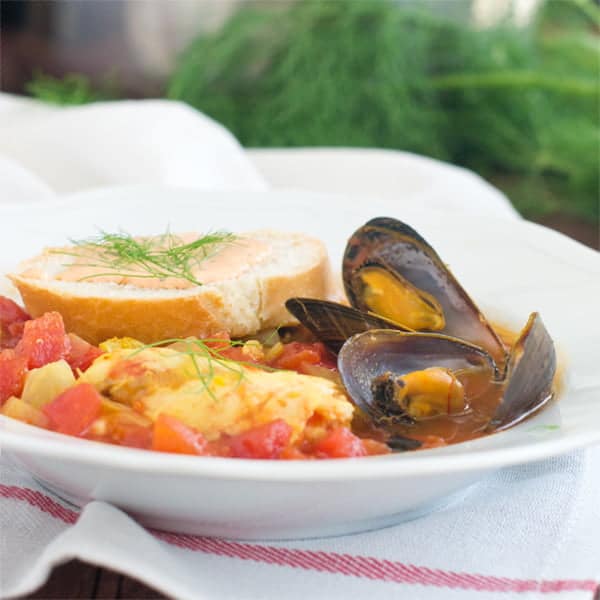