“What should I make for dinner?”

The Recipe of the Day podcast is a short, 3-5 minute, daily podcast designed to help you answer that question. In each episode, I tell you about a recipe that will inspire your dinner ideas for tonight and beyond. The episodes are also peppered with tips and tricks so that you become a better cook just by listening!

Links To ROTD Episodes (With Recipes!)

This Week’s Episodes (including today’s):

Episode 79 – A Shrimp Boil But On A Sheet Pan (So, Not Really Boiled At All! lol)

Episode 78 – Mexican Street Corn, But As A Salad. Cool, Right?

Episode 77 -Vegetable Soup With OOOMPH (In 15 Minutes, To Boot!)

Episode 74 – Who Knew That Stuffing Salmon Could Be So Easy?

Episode 71 – A Quiche With No Crust, But For Good Reason

Episode 69 – How To Roast Chicken Perfectly (The Reverse Sear, Of Course!!!

Episode 60 – Champagne and Swiss Dip (and Beer Cheese Dip Too!

Episode 48 – How to Roast Potatoes Perfectly

Sign up to get more of my recipes and tips weekly:

Episode 34 – How To Roast Pork Perfectly (The Reverse Sear!)

Episode 12 – How to Cook Shrimp From Frozen

Get ROTD Links Every Day!

2. Join the ROTD Facebook Group here  (this is a brand new group! You’ll be a founding member!),

3. Get the daily ROTD emails: 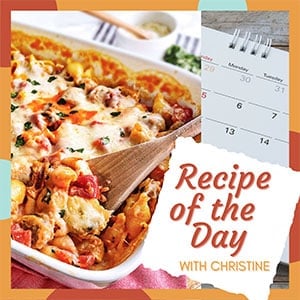