A delicious method for roasting pork loin that is juicy in the middle and brown and crusty on the outside. 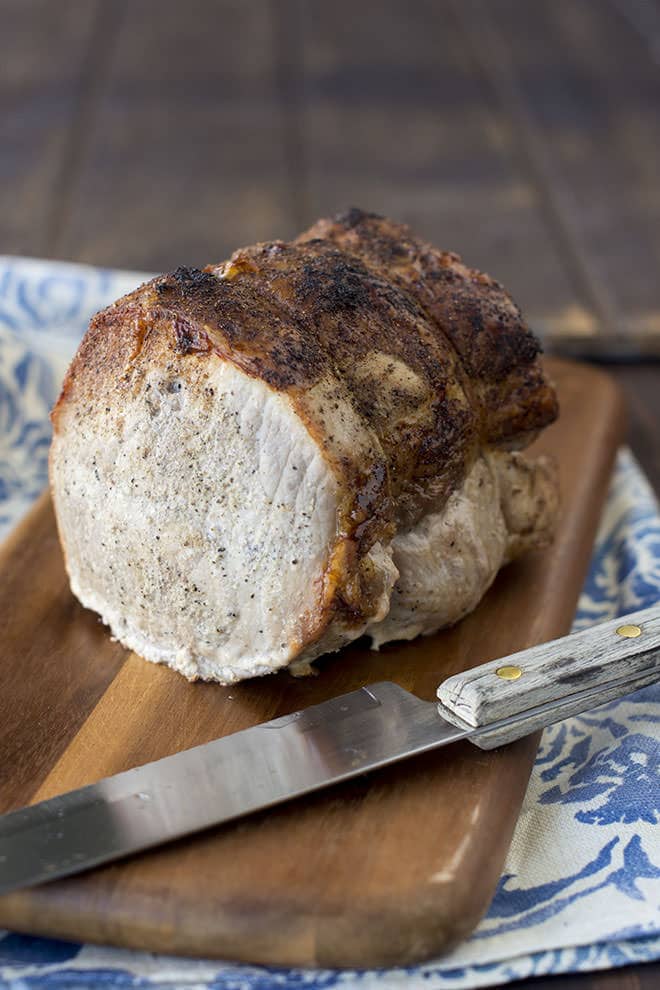 Awhile ago I posted my method for roasting pork perfectly. That post has gotten a lot of great feedback in the comment section. There are also a lot of questions there too. One that comes up often is whether you can use the same method on pork loin, or just on pork butt as the recipe calls for. My answer is always no. Pork loin is much leaner than pork butt so if you cook it in the long method I used, you’d end up with very dry pork.

Because I get asked about it often, I decided to test out some ways of roasting pork loin and share the best with you here.

What kind of pork works with this recipe

Now onto the loin!

What is the Reverse Sear for roasting meat?

Like with the roasted pork butt, I use the final-sear method that I first learned from roasting prime rib according to Serious Eats’ instructions.

Basically, you put the roast into a moderate or low oven (I used 350°F for the pork loin). You take it out when it reaches the correct temperature (145°F for pork loin) and let it rest for a good 30 minutes.

Finally, you crank up the oven really high (475°F) and give the roast a last blast in there for 10 minutes to brown and crisp up the outside of the roast. Then you carve it immediately and serve. Pretty cool, right?

So that’s what we’re going to do here, the reverse sear.

Here are the step-by-step instructions for roasting pork loin: 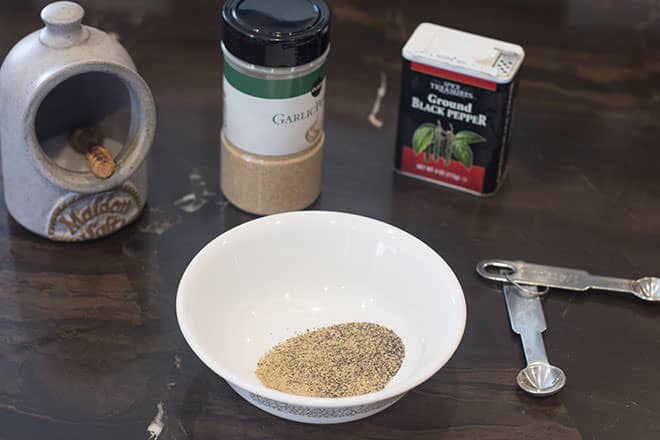 Sprinkle it all over the pork loin roast. 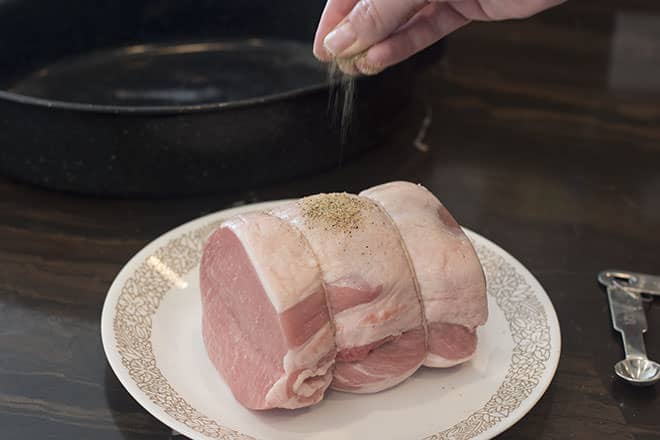 Rub it all over until it’s coated. 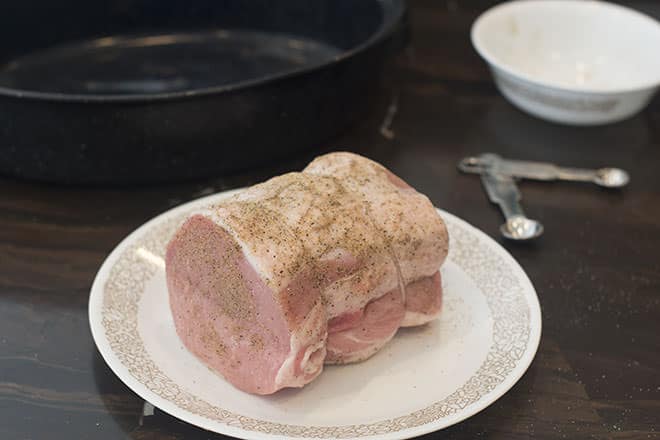 Put the roast on a rack in a roasting pan. If you don’t have a rack that fits in your roasting pan, use 3 stalks of celery like this: 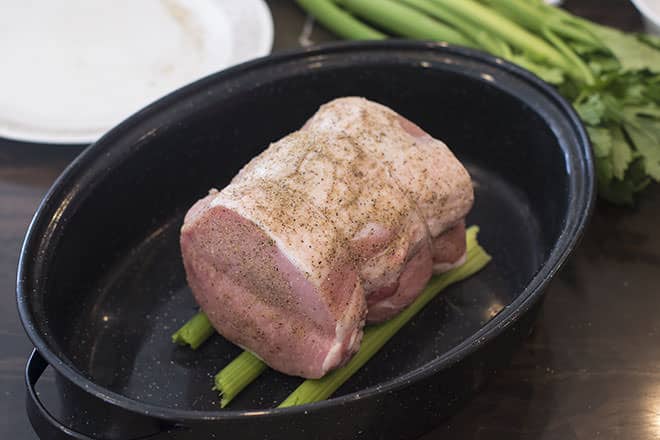 Put the roast into the oven. 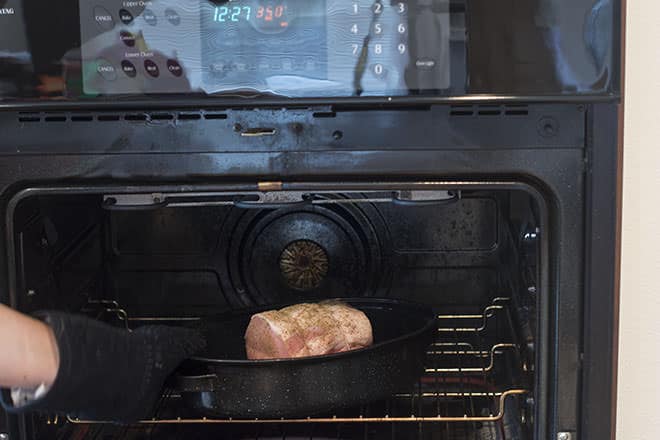 What temperature is needed for roast pork

Some people like their pork really well cooked. This is because it used to be recommended that pork be cooked to 160°F. People got used to pork like that and continue to prefer it very white and drier, versus slightly pink and moist. If that’s you and you need your pork well done, then go with the 160° temperature.

If you prefer it juicy and very slightly pink at the center, then go with 145°. For a 3-5 lb. roast, this will be 20-25 minutes per pound. (I actually take mine out at 135°F-140°F but that isn’t recommended to be safe. The 145°F temperature and the 20-25 minutes per pound are recommended to be safe and are the correct times and temperatures according to the the National Pork Board.

New Note: I have made this pork loin this way so many times. But, last week I made it and it took much longer than normal. I had a 3 pound pork loin roast and it needed 1.5 hours at 350F. That’s 30 minutes per pound. This has never happened to me before but I wanted to warn you that it could take longer than anticipated. The best thing to do is to wait to finish off your side dishes until your roast is at the correct temperature and you have taken it out of the oven to rest. That way you can be more certain that all your dishes will be ready at the same time. 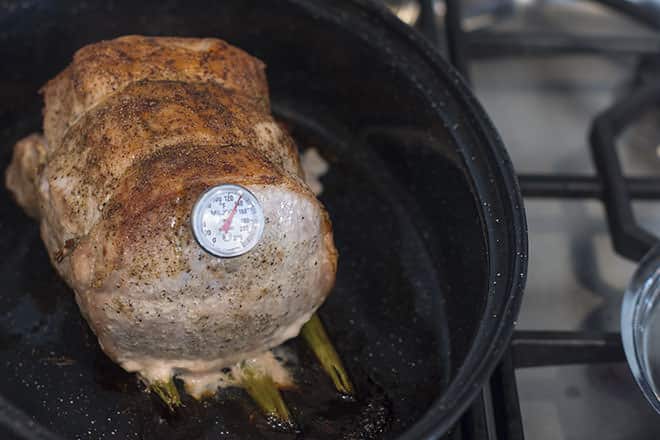 Cover roasting pan with foil and let rest for 30 minutes. 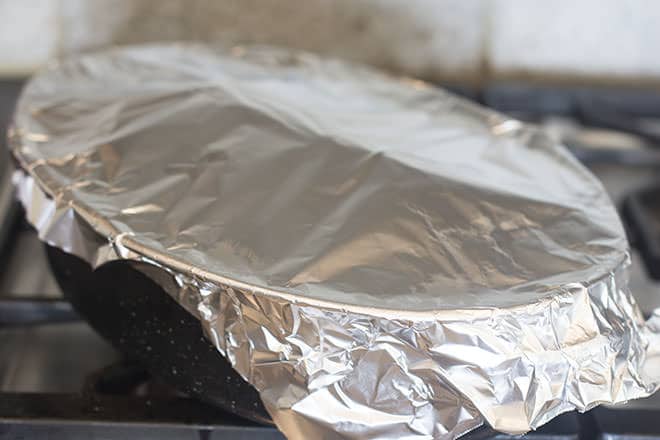 Heat oven up to 475°F. Uncover roast and remove the thermometer. Put it into a clean pan and roast for another 10 minutes. 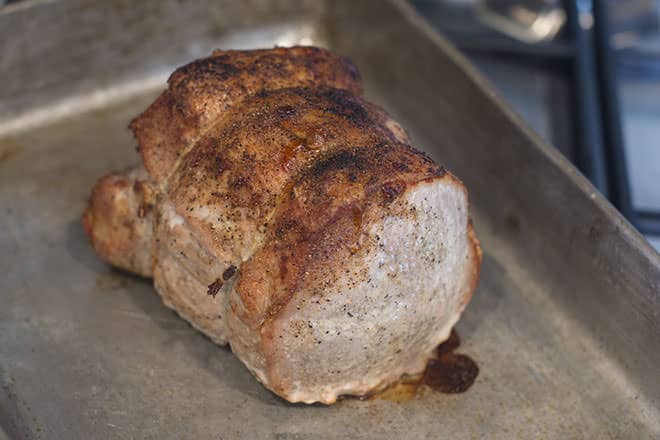 1)      Can I roast potatoes or other root vegetables in the same pan as the roast?

Yes. Use a large roasting pan so that there’s space. In a large bowl toss together cut up potatoes and carrots (you want them all in about 1/2 inch pieces) with enough olive oil to lightly coat them, and some salt and pepper. For the last 45 minutes that the roast is in the oven at 350°F, scatter the potatoes and carrots around the roast. They should be in a single layer, not piled on top of each other. Take them out when you take the roast out to rest. Keep the veggies warm or let them rest and then return them to the hot oven with the roast for that last blast of heat.

2)      Can I use different kinds of pork roasts for this recipe?

Yes, so long as the loin fits in your air fryer. It’s going to be very similar to the instructions above. Season the roast and then put it into the air fryer at 350°F, fat side up, for 20-25 minutes per pound. Check the internal temperature using an instant-read thermometer. It needs to be between 145-160°F. See info on the temperature below.

5)      What temperature should pork loin be cooked to?

According to the National Pork Board, it is now safe to eat pork once it has reached 145°F. However, many people grew up in the days where pork needed to be cooked to 160°F. When they see slightly pink pork meat, which is what you get at 145°F, it bothers them. If you are bothered by the slight pinkness, cook yours to 160°F. If that doesn’t bother you and you want juicier pork, then cook it to 145°F.

The celery is just acting as a rack to keep the meat lifted so that the air circulates under the roast, which leads to more even cooking. You can use carrots instead. Or you can use an oven-safe metal rack.

Once the pork is finished cooking, carve it and serve. If you aren’t eating the roast immediately, don’t carve it. Refrigerate it whole and then slice it once it is cold. You can get thinner slices that way because all the juices have been re-absorbed and the cold temperature makes the roast firmer. If you have sliced pork, put it in an airtight container, or on a plate covered with plastic wrap, and store in the refrigerator for up to 4 days. In a freezer bag, it will keep in the freezer for 2 months.

It’s easiest to reheat it in the microwave. Put pork slices on a plate. Add a few drops of water or stock. Cover loosely with plastic wrap or another microwave-safe cover. Microwave 40 seconds at a time until heated through. Alternatively, you can reheat a pan of slices in the oven. Put the slices in a slightly overlapping layer on a large pan. Drizzle with a bit of water or stock (1-2 drops per 4 slices). Cover with foil. Heat at 300°F for 20 minutes, or until heated through.

9)      Should we put broth or stock in the bottom of the roasting pan?

Sometimes from pork loin, you don’t get a lot of drippings (juices that drip out of the roast as it cooks). Instead, what sometimes happens is you get just a little bit of drippings and those drippings hit the hot roasting pan and then they can burn onto there. If you were later going to deglaze that pan to make gravy, there would be a bitter burned flavor from the drippings. A little bit of broth or stock in the pan gives the drippings somewhere safe to fall. They’ll drip into the broth/stock and then won’t burn. The flavor that broth gives makes it better as juices for gravy later. Also, as the broth evaporates, it leaves some brownings on the sides of the roasting pan. Make sure you either scrape those into your gravy juices, or pour more broth in to dissolve that flavor. So, if you’re making gravy, then put some broth or stock in the bottom of your roasting pan. Half an inch will do. If you’re not making gravy, then it doesn’t matter.

10)   The cooking times for the pork roast seem to decrease as the roast gets bigger (20-25 minutes for a 3-5 pound roast, but only 8-11 minutes per pound for an 8-10 pound roast, according to the Pork Board What’s going on here?

I think this is because pork loin roasts are cylindrical. They’re essentially the same thickness no matter how much they weigh. The differences in weight come from how long the roast is. An 8-pound pork loin roast will be the same circumference as a 4-pound roast but it will be twice as long. Cooking times for roasts are calculated to figure out how long it takes the heat to penetrate from the outside to the inside. Thus, it’s not going to take that much longer for the heat to get to the middle of the 8-pounder than the 4-pounder since they have the same distance from the side edges to the middle.

11)   If you’re roasting 2 or more pork loin roasts in the same pan, how do you calculate their cooking time?

Treat the two roasts as though they are separate things in the oven, even if they’re on the same pan. That is, calculate the cooking time for each one separately, and then do not add those times together. So, if one roast is 3 pounds, it will cook for 60-75 minutes. If the other is 4 pounds, it will cook for 80-95 minutes. Do not add those times together. Instead, what you’ve learned is that the roasts are going to be in the oven together for 60-95 minutes. You’ll check the smaller roast at around 60 minutes, and check on the larger one at around 80 minutes. When one reaches the desired temperature, take it out and let it start resting. It’s fine if one rests for longer than the other. Then they can both go back in at the same time for the high heat final sear.

When you cover a roast with foil or a lid, you are essentially wet-roasting it. That’s like braising. The meat steams. That’s great for some cuts of meat, especially pot roasts. However, if you want a nice browned and crunchy crust on your roast, you can’t cover it. It shouldn’t burn though. If you notice any over-browning, you can cover it with foil. Just make sure that you do not then cover it for the final blast in high heat. For the above recipe, the roast is NEVER covered when it is in the oven. It is only covered during the resting time in between its two visits to the oven.

Here are the printable instructions for roasting pork loin:

A delicious method for roasting pork loin that is juicy in the middle and brown and crusty on the outside.

*On one occasion it took 30 minutes per pound. My best advice is to wait to finish off your side dishes until your roast has reached the desired temperature and you have taken it out of the oven to rest. That way everything will be ready at the same time. 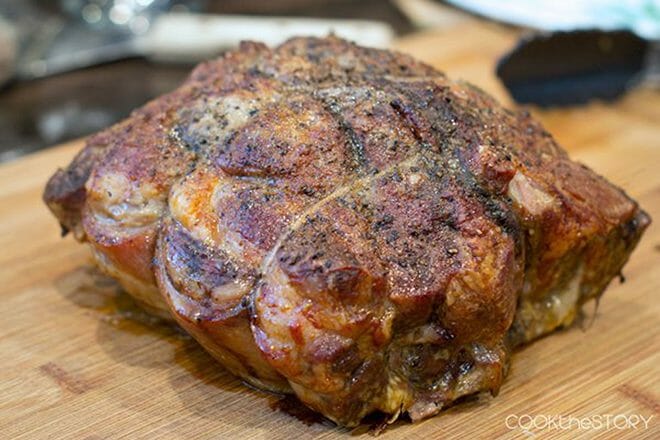 The Best Ways to Cook Pork 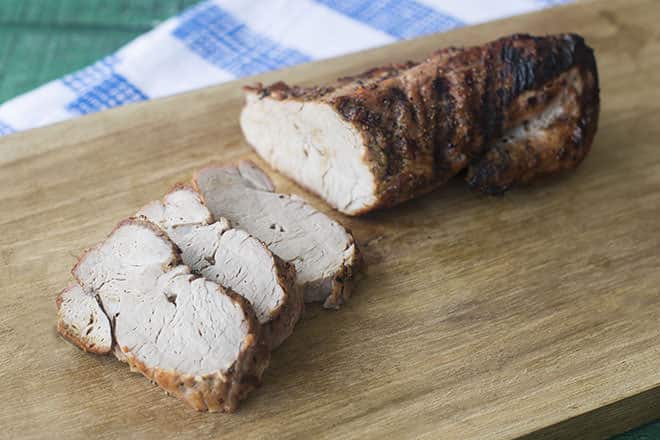 Categories: Easy Entertaining, Entrees, How To, Most Popular on Pinterest, Roast Dinner

164 Responses to “How To Roast Pork Loin Perfectly”