It can be tough to cook a juicy pork tenderloin, but we have all the tricks you need here.

What Is Pork Tenderloin?

Not to be confused with pork loin, pork tenderloin is a smaller piece of meat that comes from a different part of the animal. Sometimes referred to as pork filet or pork tender, it’s usually sold whole and averages about a pound of meat.

How Do You Cook Pork Tenderloin?

Here’s A Video Showing How To Cook Pork Tenderloin

Unlike pork butt and pork shoulder, which roast up nice and juicy as shown here, pork tenderloin can end up dry when cooked. That’s because it’s such a lean cut of meat. Cooking it can therefore be challenging, it’s not impossible though. You want to cook it fairly quickly over high heat, getting it to an internal temperature of 145°F.

There are just a few things you need to do to get seriously juicy pork tenderloin. Here’s how.

There’s a bit of sinew on the outside of pork tenderloin that ends up tough when cooked. You need to remove it, but it’s easy to do. Learn how to remove the silverskin here.

This is not a marinade. A marinade only imparts flavor to the outside surface of the meat. A brine on the other hand has a high salt content and it penetrates the meat and makes it juicier. Learn more about brining here. The basic key though is to use 1 tablespoon of kosher salt per cup of water. You need enough to completely submerge the meat, which will be about 4 cups of water for a tenderloin.

In a large bowl or ziptop bag, dissolve the salt in the water. Add the tenderloin. Cover and refrigerate for at least 30 minutes but ideally 2 hours. Some people go as long as 24 hours but that’s overkill for such a small piece of meat. Remove the tenderloin from the liquid and rinse it off. Discard the liquid.

Usually a pork tenderloin is much thinner on one end than the other. If you cook it as is, the skinny side will end up really dry and overcooked before the thicker side is done. That’s no good. So tuck the skinny side up a bit and secure it with metal skewers.

Season with pepper and whatever else you’d like. Just remember that you already brined the tenderloin in salt so don’t add anymore here.

Put the pork tenderloin in a baking dish that fits it easily without needing to bend it at all. Put it uncovered into an oven that has been preheated to 350°F. Bake for 20-27 minutes, until the internal temperature on an instant read thermometer is at 145°F.

Let the tenderloin rest on a cutting board for 5 minutes and then slice it in about 1/2-inch slices and serve.

Below are printable instructions for baking pork tenderloin. Enjoy!

It can be tough to cook a juicy pork tenderloin, but we have all the tricks you need here.

This post originally appeared in December 2017 and was revised and republished in February 2020. 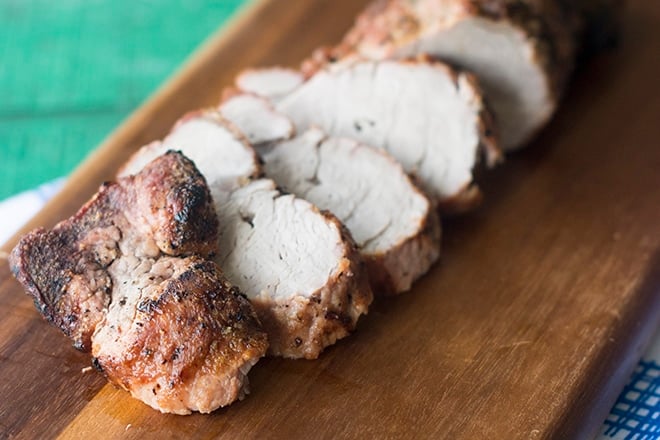 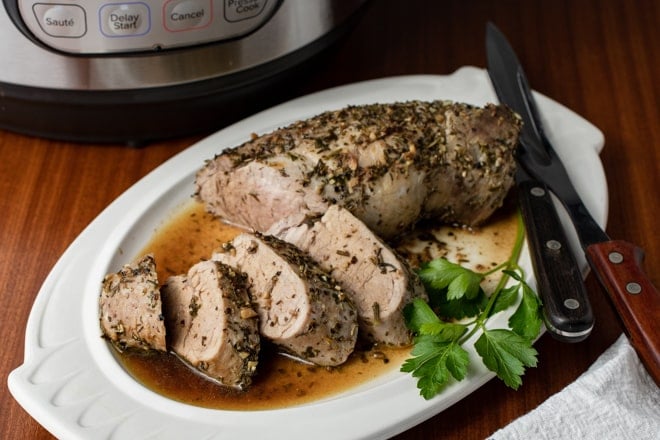 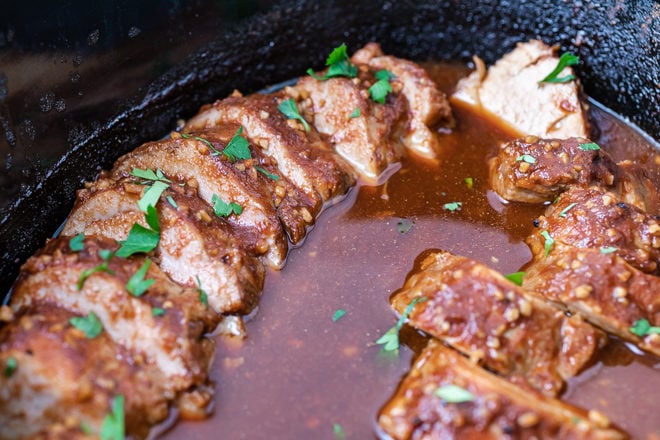 24 responses to “How to Cook Pork Tenderloin”