A Pea Soup that uses frozen green peas instead of split peas so that it’s ready before you believe possible. And it’s beyond delicious too! 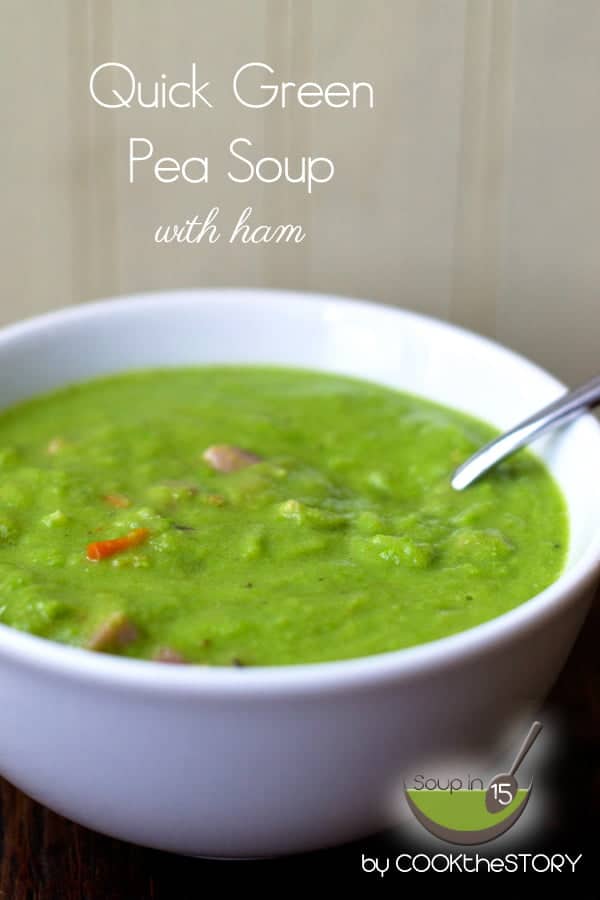 Here’s a Video Showing How To Make This Quick Pea Soup:

Since back in July I’ve been sharing quick homemade soup recipes with you. The idea is that these are all ready in under 15 minutes, start to finish. While I never wrote this to you, it was always in my head to try to tackle as many standard soup recipes as I could. I mean, it’s great if you can make a bunch of homemade soups quickly but if you can’t do a Chicken Noodle or a Cream of Mushroom then it’s not really that useful, is it?

But one that I thought would be impossible was Split Pea Soup. I couldn’t imagine ever getting those dried split peas to cook quickly since their usual cooking time is around 30 minutes. No way, no shape, no how!

But then I remembered how much my family loves soup made from frozen green peas. I did a version here on COOKtheSTORY awhile ago and those of you who made it back then sent me some great feedback. It’s so simple for something so delicious. You get frozen green peas, heat them, add some other flavors and puree. For that version the other flavors were basil, lemon, olive oil, and Parmesan cheese.

The flavors I chose for today’s pea soup are the classic ones you find in split pea soup: ham and bay leaf. Together with some chicken broth and all those peas, it tasted amazingly like that old standard but with a fresher brighter flavor. And it was done much more quickly. 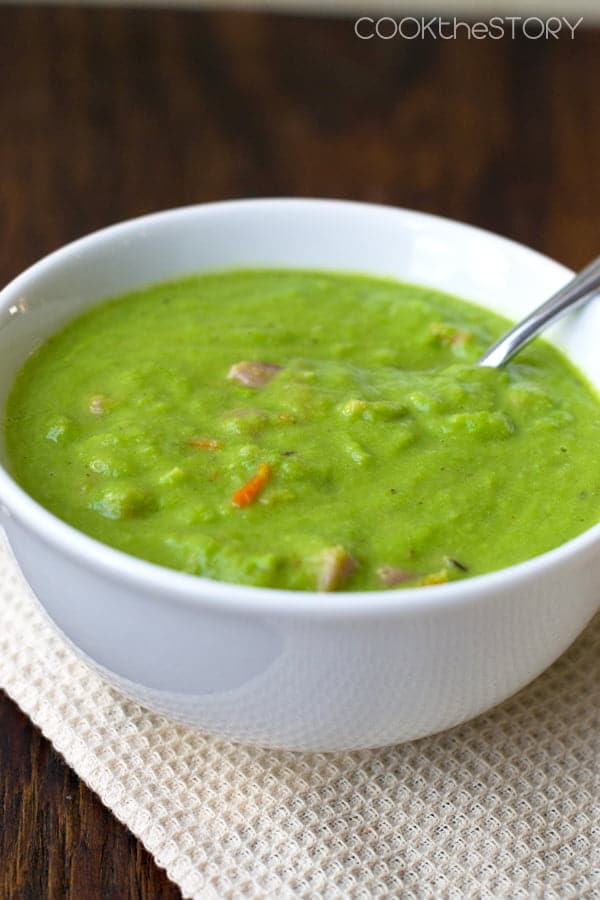 As usual when I share a SOUPin15 recipe with you I also have a tip to give you for making delicious soups quickly. Today’s SouperTip is the immersion blender. I don’t usually tell you that you need a particular piece of equipment. And you don’t *need* this one to make this recipe. But it does make things quicker and easier.

Instead of having to transfer the soup to the blender in batches, blend each batch and transfer that to a separate pot or bowl while you wait for subsequent batches to be pureed, you just leave it all in the pot, insert the immersion blender and puree to your heart’s content. So easy. (In the case of today’s soup, part of it is heated in the microwave in a large bowl. The immersion blender is then used inside of that bowl. Same idea though).

Something else I’ll tell you about immersion blenders. When I first got mine, I wasn’t convinced that I needed it. I therefore bought a cheap one. It cost me about $20.00. My thinking was that if I really loved it, I would later splurge for a more expensive model. That was 8 years ago and I’m still using that old cheap one. Not because I didn’t love it enough to upgrade but because it works perfectly as it is. I use it all the time, it does the job and I’ve never felt the need to get a new one. So if you don’t have one already, think about getting an inexpensive one just to try it out. Maybe you’ll get lucky too. (Note that I would love to tell you which one I have but it doesn’t have a brand name on it at all. It really was a low-cost no-name brand, I suppose). 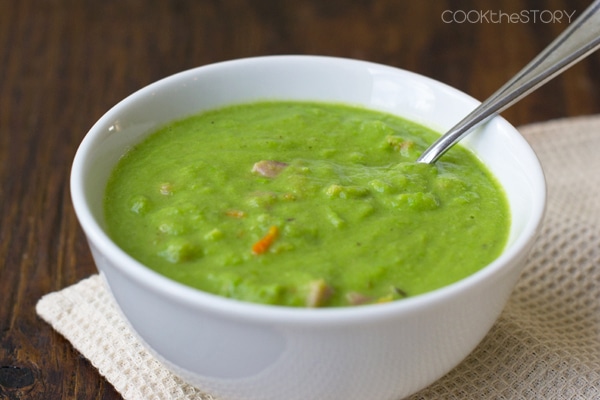 All the flavors of pea soup in a fraction of the time! This soup uses frozen green peas instead of split peas to come together quickly. To make this soup in 15 minutes, first read through the recipe. As you read, gather together everything you’ll need including all ingredients, pots, pans and tools. This is so that everything will be within easy reach. Note though that you do not need to prep any ingredients. All prep is described in the instructions section and is included in the 15 minutes. See you in 15! (Yield 7 cups)