This chicken cordon bleu recipe stacks the ingredients instead of stuffing them inside, which makes it much quicker and easier to do. And it’s baked, so it’s a simpler and healthier version of the classic. 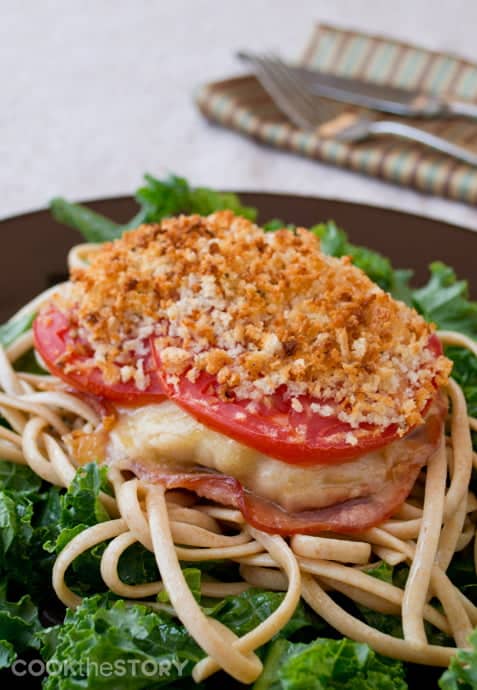 What is Chicken Cordon Bleu?

Chicken Cordon Bleu is a European classic that originated in Switzerland. It’s usually made by stuffing ham and cheese inside of a chicken breast and then breading and pan-frying it.

The name Cordon Bleu means “Blue Ribbon” and refers to a wide blue ribbon once worn by the highest order of knights. Calling something blue ribbon was a way to say that it was of special, high class or quality.

Why is this Cordon Bleu Easier than the Classic?

When it comes to weeknight meals, I didn’t want to spend the time flattening the chicken into a cutlet (which you can learn to do here if you’d like), and then stuffing it, and then breading it, and then panfrying it. You already can tell what a pain this would be, right? Instead, I came up with this Chicken Cordon Bleu recipe where the ham, chicken and cheese are simply layered and then topped with breadcrumbs that get nice and crunchy. 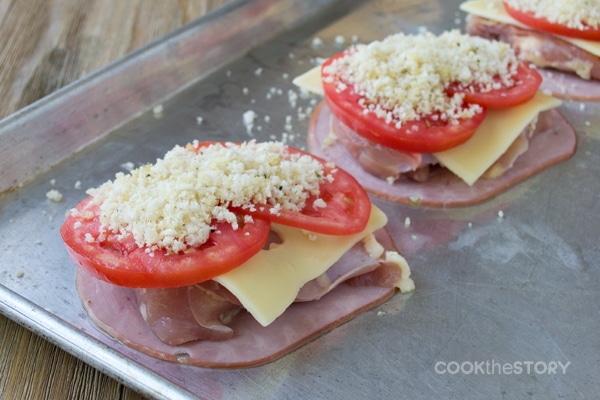 Notice that the ham’s on the bottom? That’s to catch any cheese that melts off the top and tries to slide away. Some of the cheese does make it off of the ham. But it’s ok because that cheese gets all brown and crunchy and amazing. See? 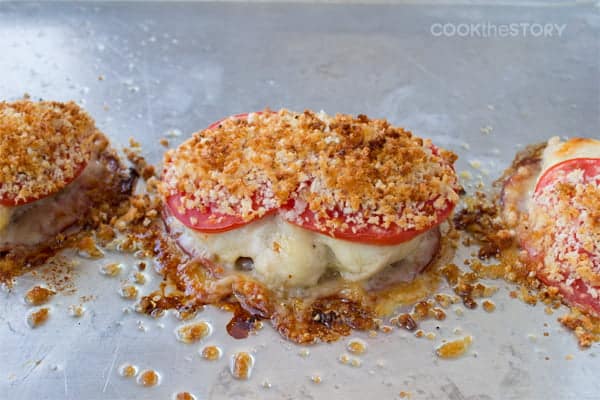 You might notice that I’ve included tomato slices here. Those aren’t traditionally part of chicken cordon bleu, but I wanted a bit of extra moisture and some vegetable all in one dish. Tomatoes arrived.

What Kind of Chicken to Use for Cordon Bleu?

I prefer using chicken thighs for this dish. I get the boneless skinless chicken thighs and kind of unroll them to make flat pieces of chicken. I prefer thighs to breasts for most things because they’re juicier and don’t get overcooked as easily.

However, chicken breasts are healthier. If you want to use breasts instead of thighs, you absolutely can. You want the breast to sit within the slice of ham. If the chicken breasts are too big for this, then cut them in half. I would also suggest that you consider pounding them slightly. This is because chicken breasts are usually thicker on one end than the other (the rounded end is usually thicker than the pointy end). What this means is that the pointy end ends up overcooked by the time the rounded end is cooked through. If you pound the thicker end down a bit so that it’s the same thickness as the thinner end, then the breasts cook more evenly. Learn how to pound the chicken breasts (and see pictures of how to do it) here.

This chicken cordon bleu recipe stacks the ingredients instead of stuffing them inside, which makes it much quicker and easier to do. And it’s baked, so it’s a simpler and healthier version of the classic.

This post originally appeared in September, 2013. It was revised and republished in October, 2019.