These comfort-food Air Fryer Stuffed Pork Chops take less than 30 minutes to make, and thanks to a creative cut, keep all of the stuffing inside the pork chop where it belongs.

If you’re looking for a stunning dinner in less than 30 minutes, Air Fryer Stuffed Pork Chops will tick every box for you. It’s not only quick and simple but practical, too. With the crown of stuffing on the top instead of on the side like most stuffed pork chop recipes, all of the delicious stuffing stays right where it should—inside the chop.

How To Keep The Stuffing Inside A Stuffed Pork Chop

A two-inch-thick, center-cut pork loin chop works best for this recipe because it can easily stand upright on its side without falling, which is key to keeping the stuffing in place while the chop is cooking. We’re going to turn the chop into a “pita pocket,” by cutting a deep pocket slit into it, which will also help keep the stuffing in place.

To safely cut the pocket slit for the stuffing, stand up the chop on a flat cutting surface with the narrow, fat capped side facing up. You’ll see from the picture how the pork chop is standing up on one of the long edges. You’ll want the side without the fat cap against your cutting board, so that the fat is on top. (This way the fat gets deliciously brown while cooking.)

Then cut a deep, vertical slit down through the fat and into the chop to create a pocket, leaving about a half-inch uncut on each end. The slit should be deep, but not all the way through. Repeat this with the remaining chops and then sprinkle salt around and inside the pocket of each.

Should I Brine Pork Chops?

Pork loin chops are an incredibly lean cut of pork, and can easily become dry if overcooked, especially in an air fryer. If you’re not a fan of the pork loin cut in general, or if you’re concerned about overcooking the chops in the air fryer, a quick 30-minute brine in a saltwater solution can help keep the meat moist and tender. This step isn’t mandatory, but it will contribute some additional moisture and tenderness.

To quick-brine, cut the pocket slit into each chop as described above, and then place the chops into a large baking dish, in a single layer. Cover the chops with water and add three tablespoons of salt. Let this sit at room temperature for 30 minutes, flipping them halfway through, then remove the chops from the saltwater solution and pat dry. There’s no need to add additional salt to the chops after the brine, so they can be stuffed according to the recipe.

What Kind Of Stuffing For Pork Chops?

I’m partial to my Mom’s homemade stuffing, which I make for this recipe often without the egg, but any flavor of boxed stuffing mix works well in this recipe. A standard box mix will yield just about two cups, which is the perfect amount for four pork loin chops. Make the stuffing according to package directions, and divide it into four equal portions (about a half cup each). I find that it helps to roll the portions into a ball before placing them into the pork loin chops.

What Temperature Is Safe For Pork?

In the basket of the air fryer, lean each pork chop against one of the basket walls, leaving the center of the basket empty. This will help to keep the pork chops from falling over during cooking, and will also allow the maximum amount of air to circulate for a quick cook.

Whole muscle pork, like a pork chop, should be cooked to 145°F. If the chop is stuffed, the stuffing also needs to reach that internal temperature. Because all air fryers vary in size and intensity of air circulation, you’ll always want to check the temperature of the stuffed pork chop right at the bottom where the stuffing meets the chop, inserting the thermometer into the meat, which will be the thickest part.

It will take about 15 minutes for the stuffed pork chops to reach a temperature of 137°F. The stuffing has browned nicely at this point as well. If cooking continues in the air fryer though, the top of the stuffing will burn.

To prevent the stuffing from becoming overcooked on top, while still allowing everything to come up to the correct internal temperature, keep the pork chops in the air fryer after the timer goes off for five minutes. Do not pull out the basket. The chops will continue cooking, but without the hot air circulating around the stuffing.

How To Serve Stuffed Pork Chops

Because the chops are stuffed, the stuffing acts like a built-in side dish. I like to serve this with a Caesar salad or traditional green beans which can be cooked directly in the air fryer after the pork chops.

Thanks to a creative cut, the stuffing stays inside these pork chops where it belongs! Get more details on how to cut the pocket and stuff the chops in the post above. Note that if you’re using a box of stuffing, you need to prepare it according to its package directions before using it. If you’re making homemade stuffing, check out my recipe here, just omit the egg.

Listen to me explain briefly about how to make these stuffed pork chops, with some great tips along the way, by clicking the play button below: 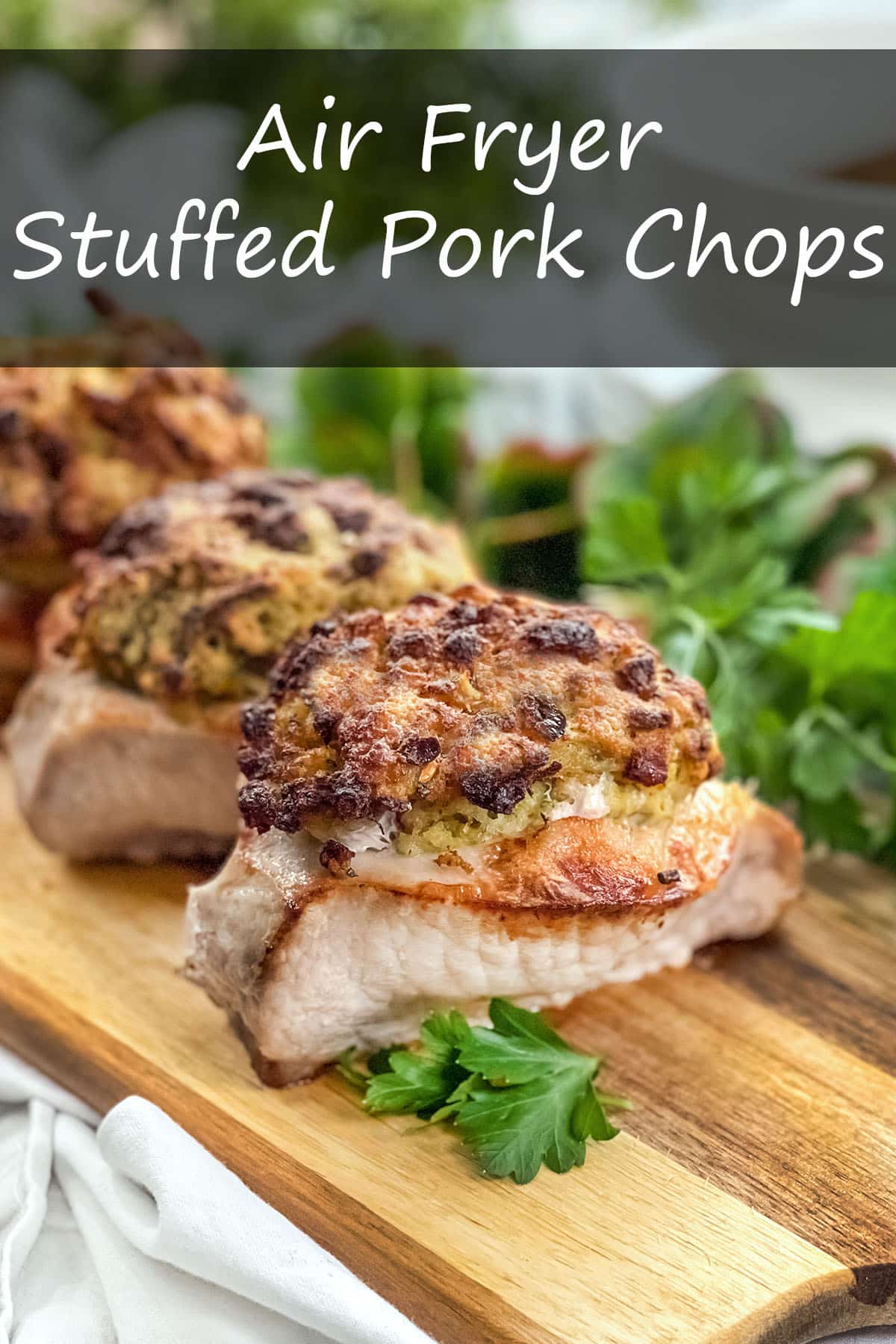 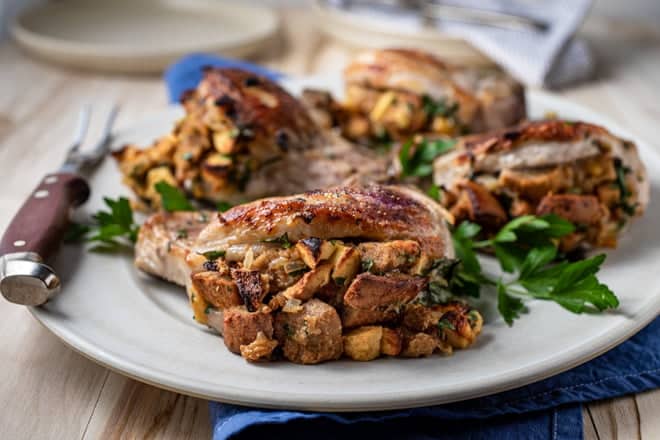 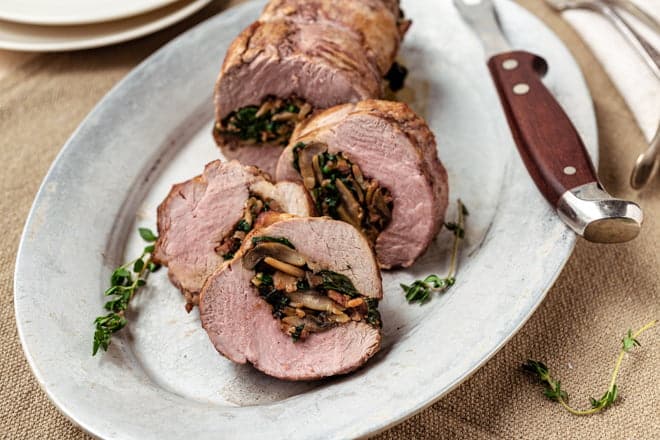 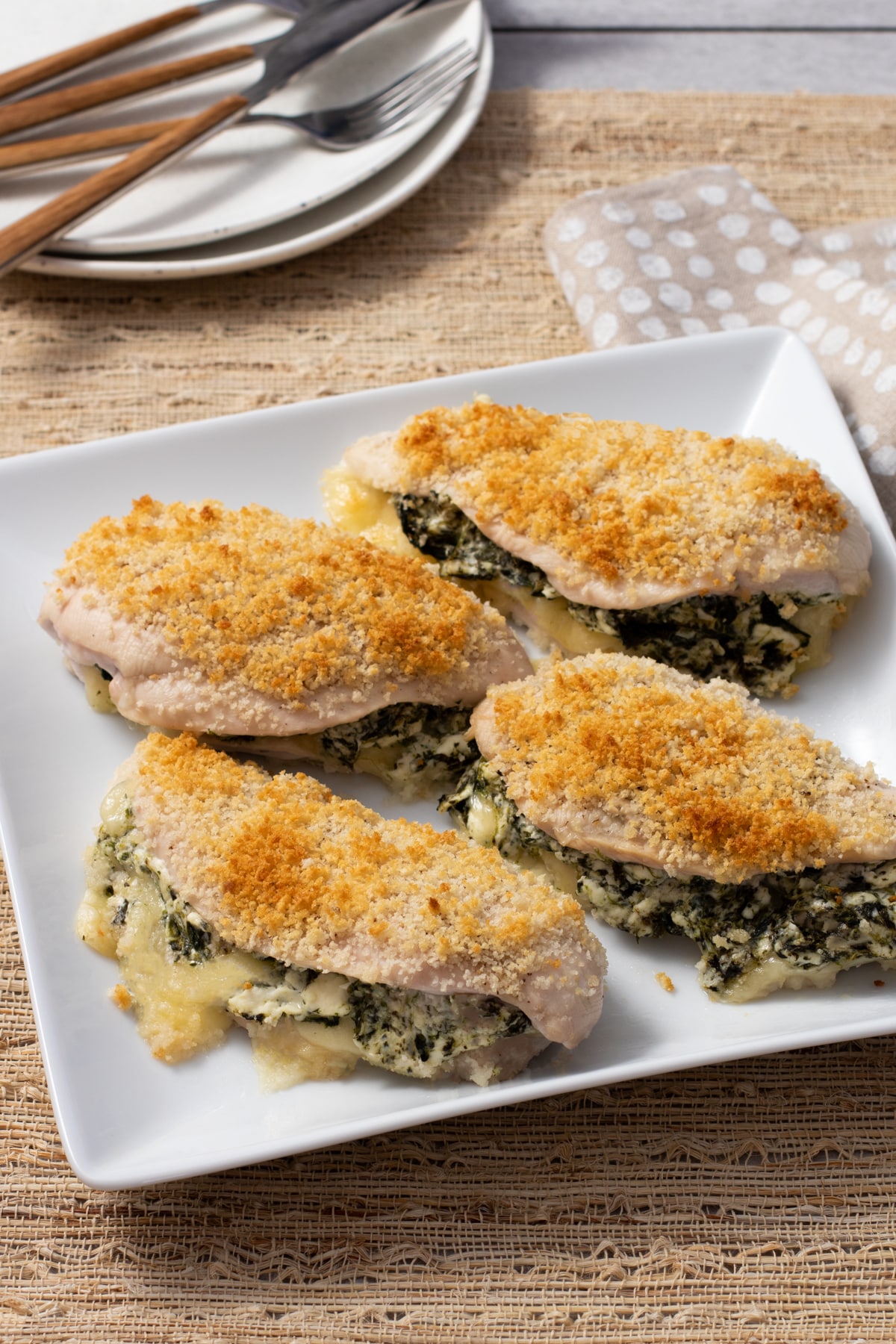 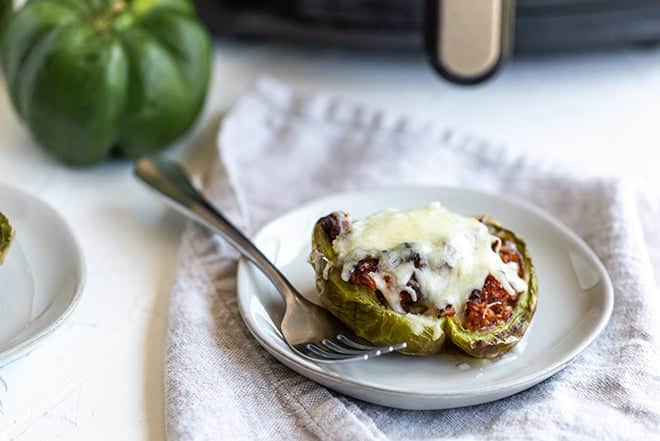