This super-easy turkey brine (no boiling required!) also delivers the most flavor using a flavor-bomb slurry of onion, garlic, and herbs.

If you’re like me, when you read turkey brine recipes, you start to feel some dread. They often involve you boiling a large quantity of water with aromatics so that the water can get flavored. Then you dissolve the salt into there, and then you need to fully chill it so that it is safe to use with the turkey. All of that before the brining even starts!

Because of all of that, I decided to try to find a simpler way to do it. You probably know that I’ve been obsessed with perfecting brining for awhile now. I came up with my basic brine recipe and method years ago, and then more recently I spent a lot of time experimenting with brining chicken breasts to get the optimum salt concentration and timing figured out so that it’s possible to brine even on weeknights. I’ve also figured out the perfect pork chop brine.

The recipe I’m sharing with you today for the most delicious and easiest turkey brine comes from that same goal: How do we brine in a way that truly adds flavor while not being inconvenient.

What I’ve figured out to do is to skip all of that boiling. Instead, we’ll be making a flavor-bomb slurry in the food processor with water, salt, raw onion, raw garlic, and a ton of fresh herbs. That all gets pulverized into the water, making an extra-concentrated flavored water that is going to get sucked into the turkey during the brining process. It’s so much easier than boiling. And, you know what, it results in much more delicious and flavorful turkey meat too. I’ll tell you all about that lower down. First, what is a brine and why should you use one?

What Is A Brine?

At it’s most basic, a brine is a salt water solution used to add moisture. As you’ll see in this recipe, there can be additional ingredients to add flavor. The meat being brined absorbs that liquid, making it juicy and flavorful.

Why Should I Brine My Thanksgiving Turkey?

Brining a whole turkey before roasting can infuse every part of the bird with salt and moisture, including the breast (which can otherwise end up dry and flavorless), producing a well-seasoned and moist turkey.

Most brine recipes, however, require boiling large amounts of water with aromatics to release flavor compounds and dissolve the salt, and then cooling it completely, which can add several hours to the process of roasting a turkey.

My easy turkey brine recipe bypasses all of that and delivers even more flavor without having to boil and cool anything.

Video: How To Make The Best Turkey Brine

How Long To Brine A Whole Turkey

Other brine recipes also recommend that the turkey be brined for 8, 12, or 24 hours. My brine recipe cuts that time to just four hours with my higher concentration of salt, so you can brine and roast on the same day. This not only saves many hours, but it also frees up space in the refrigerator.

Before you get started on the brine, be sure that the type of turkey you purchase isn’t already brined. Avoid anything labeled “kosher,” “enhanced,” or “self-basting,” which has typically been injected with a salt solution before being packaged. Brining an already-brined turkey will result in a too-salty, over-seasoned bird.

Why Is This The Best Turkey Brine?

There are a few techniques I’ve combined that quickly infuse flavor and moisture into the turkey without having to boil and cool the brine.

How To Make Your Turkey Brine Slurry

The flavor-bomb slurry is exactly how it sounds. It’s a concentrated puree of potent aromatics, like raw onion, raw garlic, fresh and dried herbs, salt, and water. Many recipes call for apple cider or juice as well, but the acid can sometimes give the outer layer of the turkey a mushy or mealy texture, so I recommend just using water.

To make the slurry, add the onion, garlic, parsley, sage, rosemary, thyme, bay leaves, salt, and two cups of the water to the bowl of a food processor or large blender. Cover and puree until smooth.

This slurry acts as both a brine and a marinade of sorts. The salt water plumps up and seasons the meat, while the aromatics flavor the outside skin and about ⅛-inch into the meat.

If you don’t want to fuss with the fresh onions, garlic, and herbs, the same slurry method can be created using dried spices using the amounts below and following the same steps:

Additional aromatics can also be included in the slurry, like whole peppercorns, whole juniper berries, orange zest or peel (without the pith), and fennel bulb.

How To Brine A Whole Turkey

It’s important to use a tall, rather than wide, container for brining the turkey, like a large stock pot or a five-gallon bucket. This allows for better displacement of the liquid around the turkey so that the brine is touching every part. Placing the turkey head first into the container is also a crucial step, ensuring the important parts of the bird, like the breast, thighs, and drumstick meat are fully submerged. If the tail or drumstick bones stick out of the brine, it’s perfectly okay.

Transfer the brine to the tall container of choice, and then lower the turkey into the brine, head first.

If the container won’t easily fit into the refrigerator, you’ll need to add a little bit of ice to the brine to keep everything cold. Fill most of the remaining space in the container with ice, leaving about an inch or two at the top, then cover the container and keep it in a cool, dry place, away from direct sunlight.

The little bit of ice will keep everything cold enough and within the safe food handling guidelines for the turkey. And by the time the ice begins to fully melt, the four hours will be up. As the ice melts, it will just become part of the brine, and because the salt ratio is already very high, the little bit of ice won’t affect the brine concentration.

While brining does add moisture, it’s not a substitute for keeping the turkey moist if it becomes overcooked, so I recommend for something this special that a digital probe thermometer is used to monitor the temperature of the turkey while it’s cooking.

After the turkey has been in the brine for four hours, transfer the turkey to a roasting pan and pat it dry using paper towels. Then, cook the turkey according to your favorite recipe and get ready for the most flavorful turkey you’ve ever had.

Sometimes the pan drippings from a brined turkey can be too salty. The best thing to do is to have some store-bought or homemade unsalted chicken stock on hand just in case your drippings aren’t usable.

If your drippings taste fine to you, then you can make gravy the usual way. However, if your drippings are too salty, you can make this gravy without drippings recipe using the chicken stock. Since the chicken stock isn’t salted, you can add some of your salty turkey drippings to your gravy as seasoning. Just note that if you’re going to be simmering your gravy for awhile, the salt will concentrate and you may need to add water to get it back to the original flavor.

If dealing with a liquid brine and large containers seems too overwhelming to you, there’s other options. You could dry brine your whole turkey which still adds salt and seasoning to your meat without submerging it in water. It takes longer, but can sit in the fridge and doesn’t require a big container.

I’ll also soon be sharing my method for brining turkey pieces. This is great because they are easier to handle, plus you can buy exactly the amounts and pieces you need for your family.

Use this brine with a thawed 10-12 lb. whole turkey. Avoid purchasing a turkey labeled “kosher,” “enhanced,” or “self-basting,” which are typically already brined before packaging.

Listen to me explain briefly about how to make this brine, with some great tips along the way, by clicking the play button below: 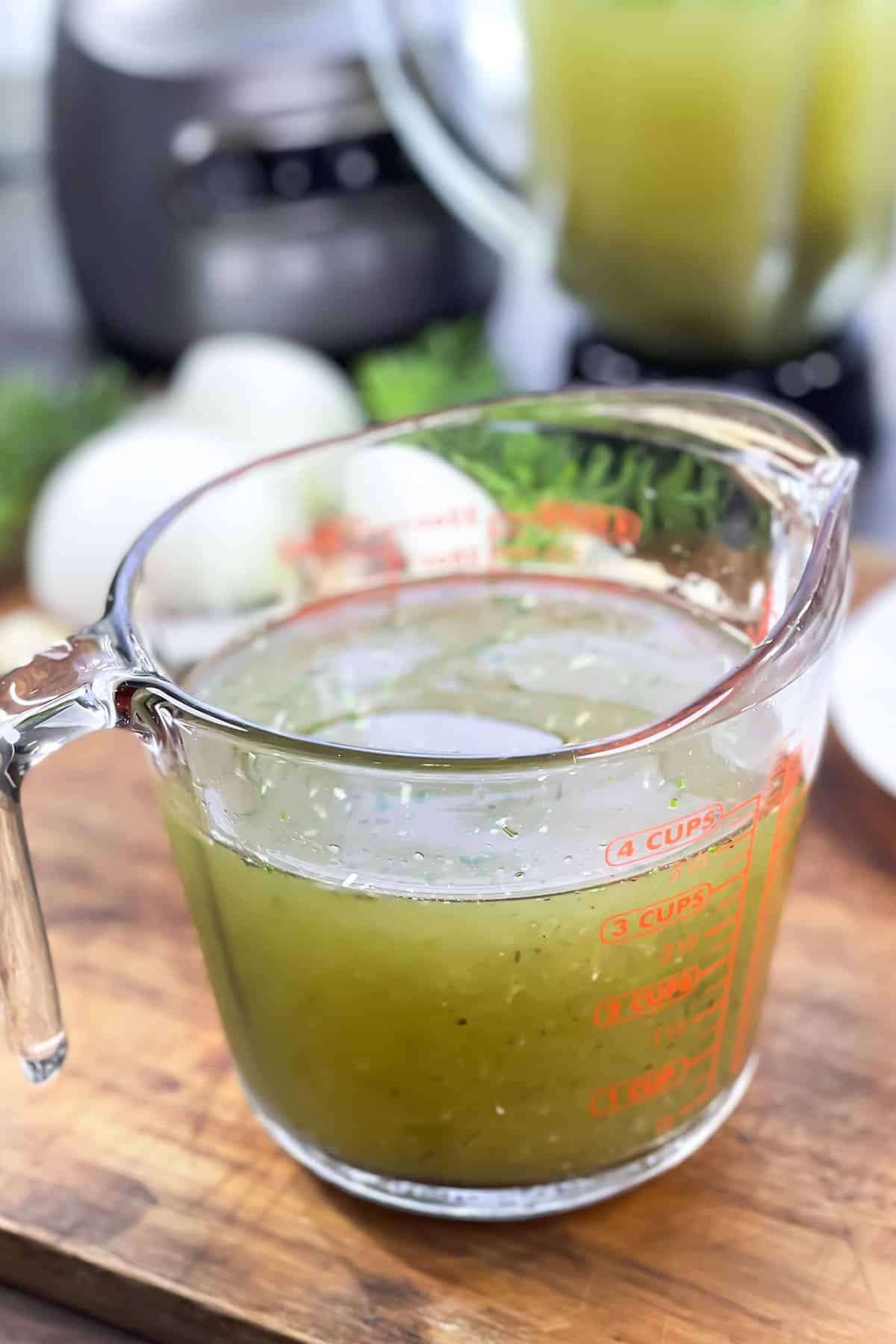 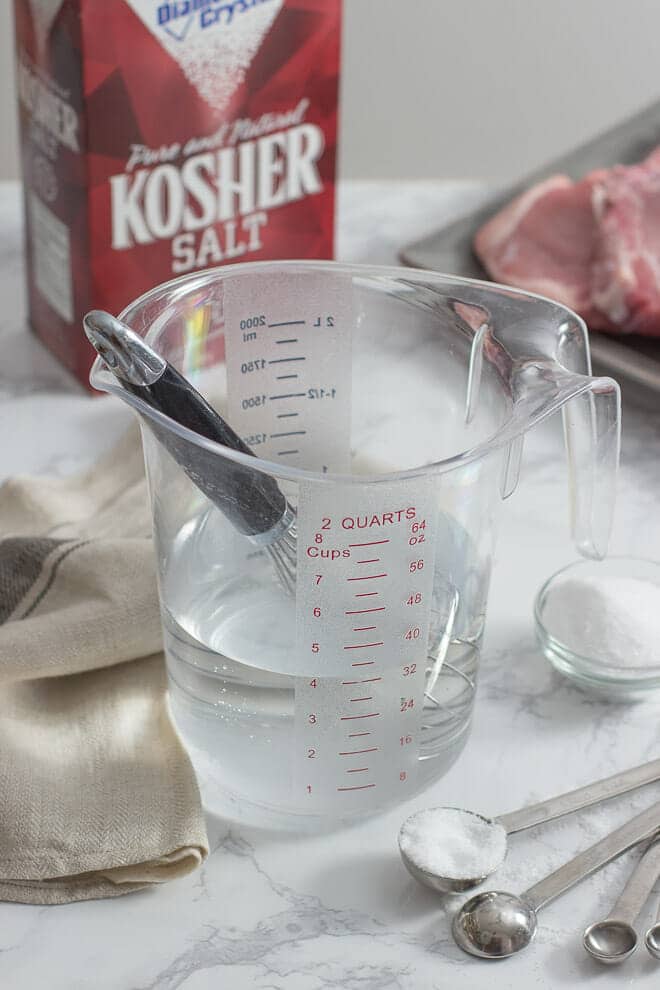 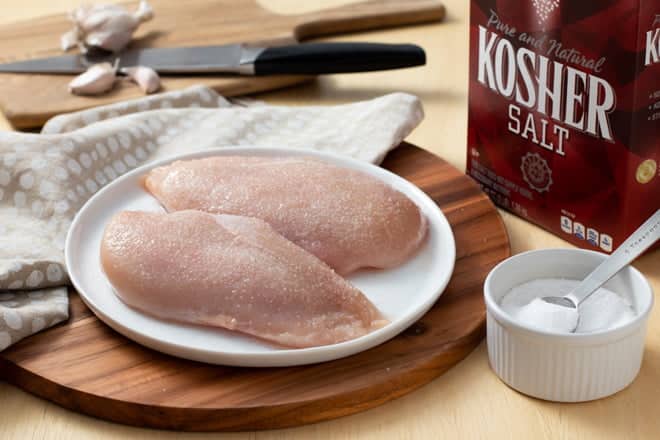 How to Dry Brine 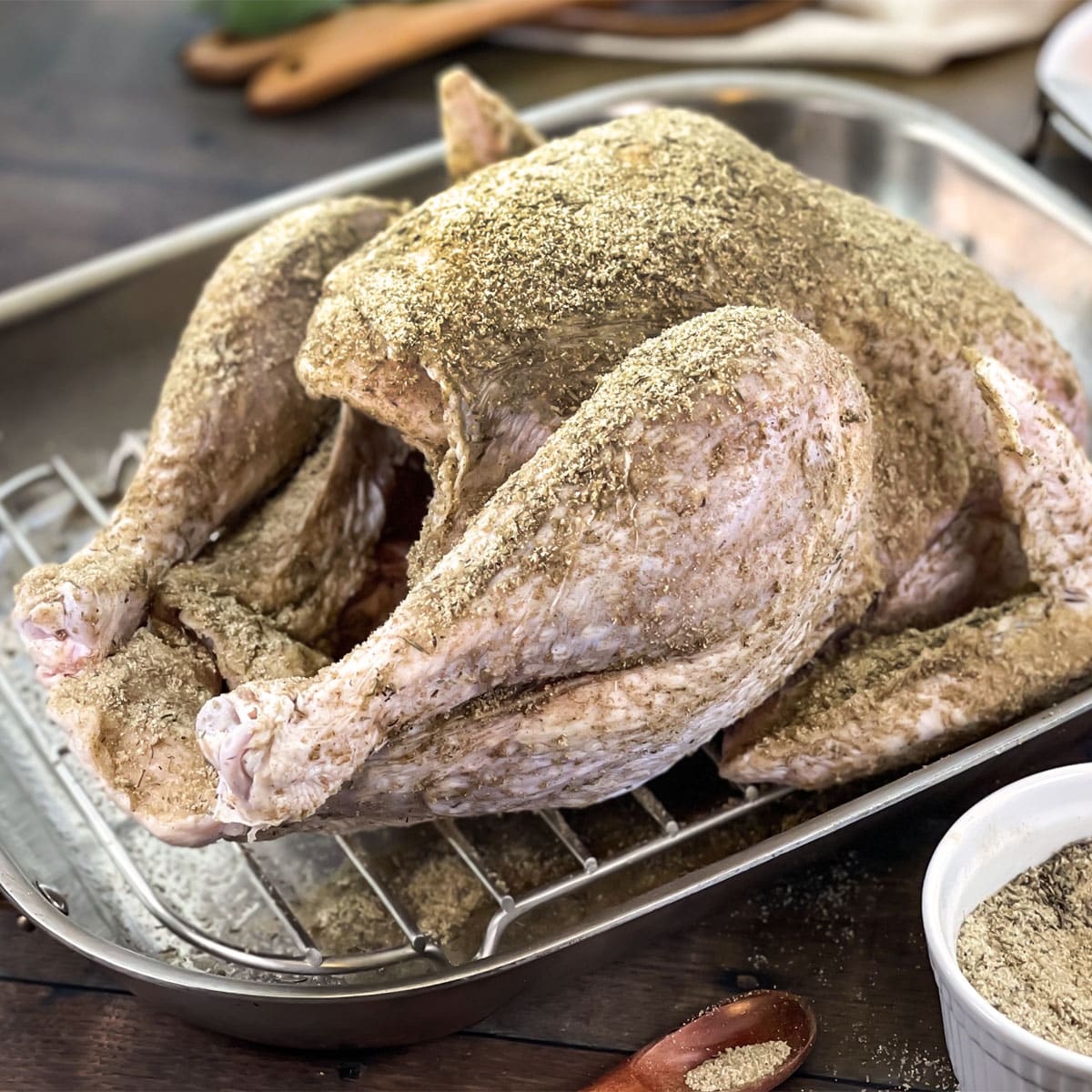 How to Dry-Brine a Turkey 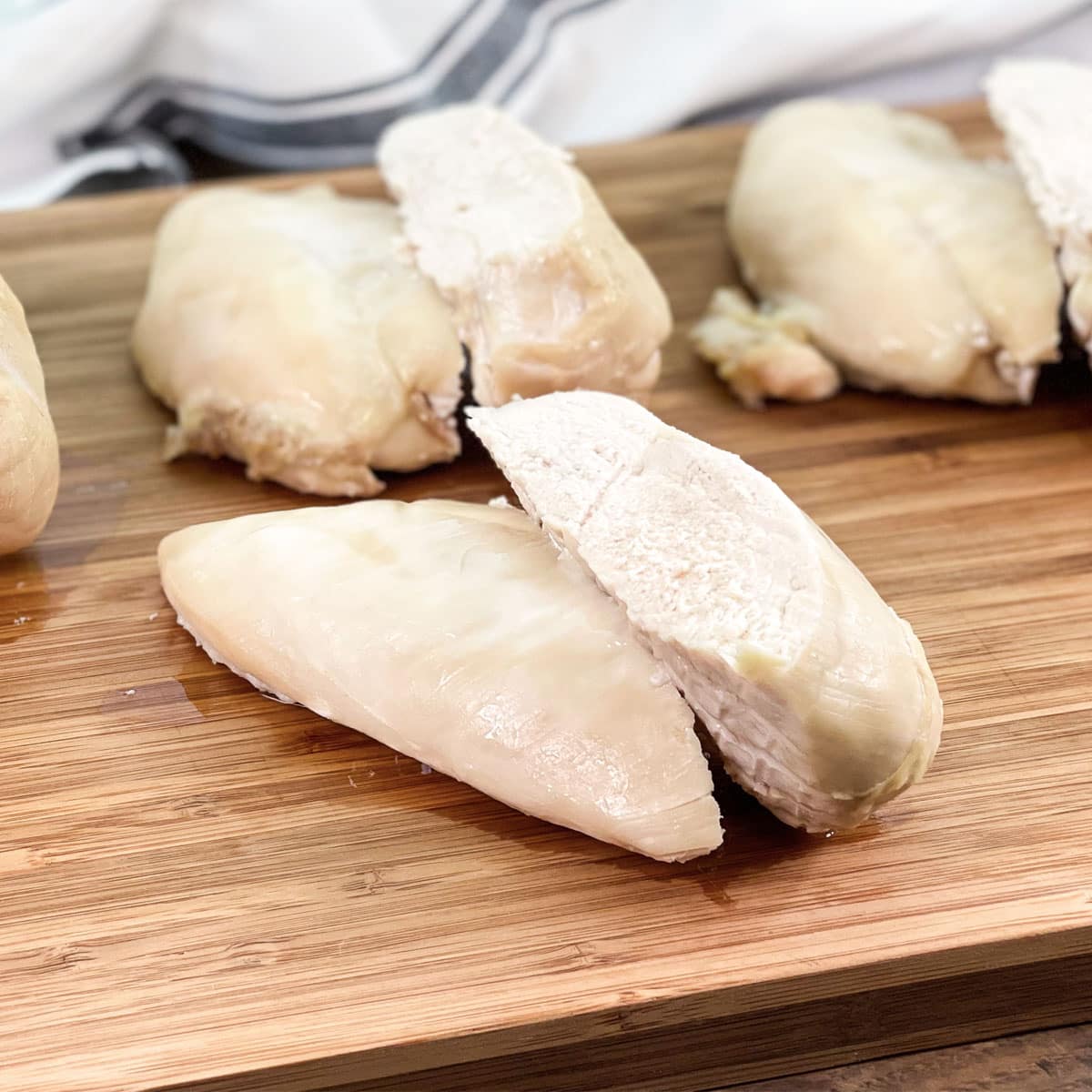 How To Brine Chicken Breasts