Stuffed Peppers are such a huge favorite. Below you’ll find my guide to how to make stuffed peppers with various options and ideas as well as recipes to try out.

I love stuffed peppers, don’t you? They’re a true comfort food with a bit of healthiness thrown in. I’m going to fill you in on the details of how to make stuffed peppers here today.

There are several different ways to make stuffed peppers and so you have some choices to make along the way. First, what type of filling to use. Second, how to cut the pepper. Third, how to fix a tippy pepper and finally, the time and temperature needed to cook your peppers.

I’ve got all that info, advice, and more today in my Stuffed Pepper Extravaganza!

The most standard way to make stuffed peppers is to prepare a filling, often by making rice and/or cooking meat and combining it with seasonings and cheese. Then you fill the pepper and bake until the pepper is tender (see info about cooking times and temperatures in the How To Cut It section below). A recipe in this style: Italian Stuffed Peppers by Well Plated.

Another great precooked stuffed pepper filling is leftovers. Leftovers of almost any kind. I’m serious. You can put leftover spaghetti and meat sauce in there, topped with cheese of course. Leftover roast or pulled pork mixed with mashed potatoes and even the leftover veg (I’d still top it with cheese). Think about leftover chicken souvlaki stuffed peppers. Imagine it! Your leftover chicken mixed with diced pita, some olives, perhaps mixed with a bit of tzatziki mounded into peppers and, yes, topped with cheese – feta in this case.

So you see, any leftovers can be used. Mound them into the peppers, top with cheese, and bake until peppers are tender and middle of filling is heated through (see info about cooking times and temperatures in the How To Cook Stuffed Peppers section below).

If you don’t want to cook up a filling, which can be time-consuming, and you don’t have any leftovers to use, you can still make stuffed peppers. In fact, stuffed peppers can be a super-quick weeknight meal.

Consider mixing together some diced ham, bread cubes, chopped tomatoes, seasonings, and cheese for the simplest of stuffings (this is best in the halved version of stuffed peppers, explained in the Hot To Cut It section below). Similarly, an omelet mixture (eggs and any fillings you’d like) will cook in a halved pepper in the time it takes the pepper to soften. Here’s just such an eggy stuffed pepper recipe from my friends over at Healthy Family Project.

One thing that is more difficult to add raw to a stuffed pepper is an uncooked carbohydrate. Regular rice or pasta will not cook properly inside the pepper. Although, if you’re making your stuffed peppers in a slow cooker (something I’ve never done and so don’t have any advice on) I’ve seen stuffed pepper recipes that use uncooked couscous or other uncooked grains.

Something that I often do for a quick weeknight meal is to chop up uncooked chicken meat into bite-size pieces. I then toss it with a bit of flour, seasonings, maybe a bit of sauce, cheese (of course!) and pile it loosely into halved peppers. The chicken cooks fully in the time it takes the peppers to soften. The flour miraculously traps any juices that escape from the chicken as it cooks so that it’s not all wet in there.

And stay tuned because later this week I’m bringing you another uncooked filling that is beyond ridiculous. Oh geez, I can’t keep this a secret: It’s Buffalo Chicken Stuffed Peppers! AMAZING.

A classic way to make stuffed peppers is a hybrid of precooked and uncooked fillings.

You cook rice and mix it with raw ground beef seasonings and sometimes a sauce. The rice soaks up the juices let off from the cooking beef. Very tasty. Here’s an example of a stuffed pepper recipe that uses cooked rice and raw beef from Simply Recipes.

Choice #2: How To Cut The Peppers

The most traditional way to cut a pepper for stuffed peppers is to cut off the top (the stem end). To do so, set the pepper stem side up. Use a small sharp knife to cut a big circle all the way around the stem. Lift out the stem and any attached seeds and pith. Use your knife to carefully dislodge any seeds and pith that remain in the pepper.

I find whole stuffed peppers a bit daunting to eat. It’s hard to cut into the without all the stuffing spilling out onto the plate. I therefore rarely make them that way.

Instead of using the whole peppers with the tops cut off, I usually halve peppers before stuffing them. To do so, set your pepper on a cutting board stem-side-up. Cut the pepper in half vertically by cutting down right through the middle of the stem, all the way through to the base of the pepper.

At this point you have another choice to make. You can either remove the stems completely from the peppers, or just cut away the pith and seeds leaving the stems intact. The benefit to the former is that everything remaining on your pepper is edible since the stem is gone. The benefit to the latter is that leaving on that stem makes the pepper edge more even and lets you put more stuffing into your pepper.

You can compare the methods and looks of the peppers at TheCookful.

Choice #3: What To Do About Tippy Peppers

If your pepper doesn’t stand up nicely there are two things you can do. Try cutting a small flat piece off of the bottom of the pepper so that it has a more even bottom. But don’t cut all the way through the pepper when doing so or any liquid from your stuffing will leak out.

The other thing you can do for tippy peppers is to make nests for them using aluminium foil. Take a 12” square of foil and form it into a bowl shape by crumpling the edges towards the center. Make the scoop of the bowl the size of your pepper. Set the nests in your baking dish and then put the peppers in the nests.

Choice #4: How To Cook The Stuffed Peppers

How long and at what temperature you cook your stuffed peppers comes down to how soft and you want your pepper and to whether the filling has raw ingredients that need to reach a particular temperature.

I’ve seen stuffed pepper recipes with temperatures ranging from 350ºF to 450ºF and cooking times from 20 minutes to an hour. I’ve also seen recipes where the peppers are blanched in boiling water for a few minutes before stuffing to get them even softer. See a recipe that blanches the peppers here.

Here are some times and temperatures that work for the different choices you’ve made above:

For Halved Peppers With Fully Cooked Ingredients In The Stuffing

450ºF for 20 minutes will soften the pepper to al dente (soft with the tiniest bit of bite) and even darken them in places. It will also heat the ingredients through and give any lightly oiled breadcrumbs on the tops of the pepper and nice brown touch. If you like your peppers softer, go for 350ºF for 35-40 minutes.

For Halved Peppers With Raw Meat In The Stuffing:

So long as the meat is either ground or cut into bite-sized pieces and you haven’t stuffed the peppers too tightly, these will cook quickly. 400ºF for 25 minutes is enough. But do check the insides with an instant read thermometer and make sure that they’re fully cooked (160ºF for a stuffing containing ground beef and 165ºF for a stuffing containing ground chicken, ground turkey, or pieces of chicken). If you want your peppers softer, cook at 350ºF for 35-40 minutes.

For Whole Peppers With Fully Cooked Ingredients In The Stuffing

Whole peppers take longer than halved peppers because there is more filling inside. But the peppers themselves cook at essentially the same rate. 400ºF for 25 minutes will heat everything through and soften the pepper up a bit. 350ºF for 45 minutes if you want a softer pepper.

For Whole Peppers With Raw Meat In The Stuffing

People tend to pack this style of pepper pretty full. That means that it takes longer for the heat to reach the center of the stuffing and really cook everything through. I go with 350ºF for about an hour. Again, use an instant read thermometer pushed to the center of the stuffing to make sure that your meat is cooked through (160ºF for a stuffing containing ground beef and 165ºF for a stuffing containing ground chicken, ground turkey, or pieces of chicken).

There you make it, the guide for How to Make Stuffed Peppers! What’s your favorite way to make them?

This post originally appeared in February 2014 and was revised and republished in May 2021. 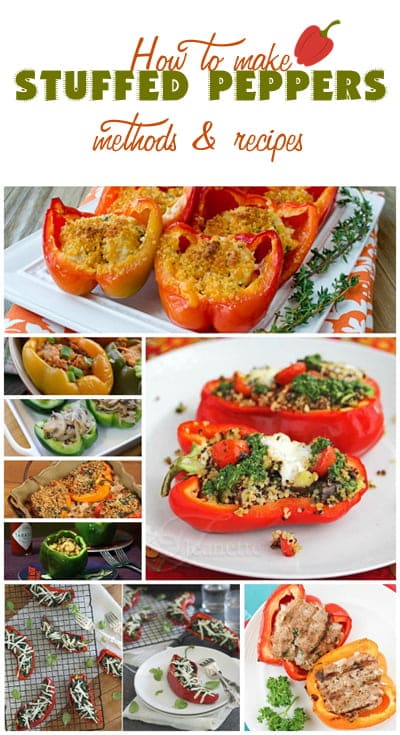 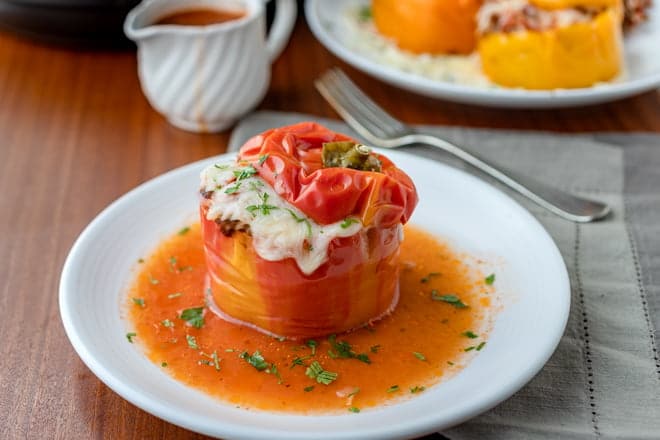 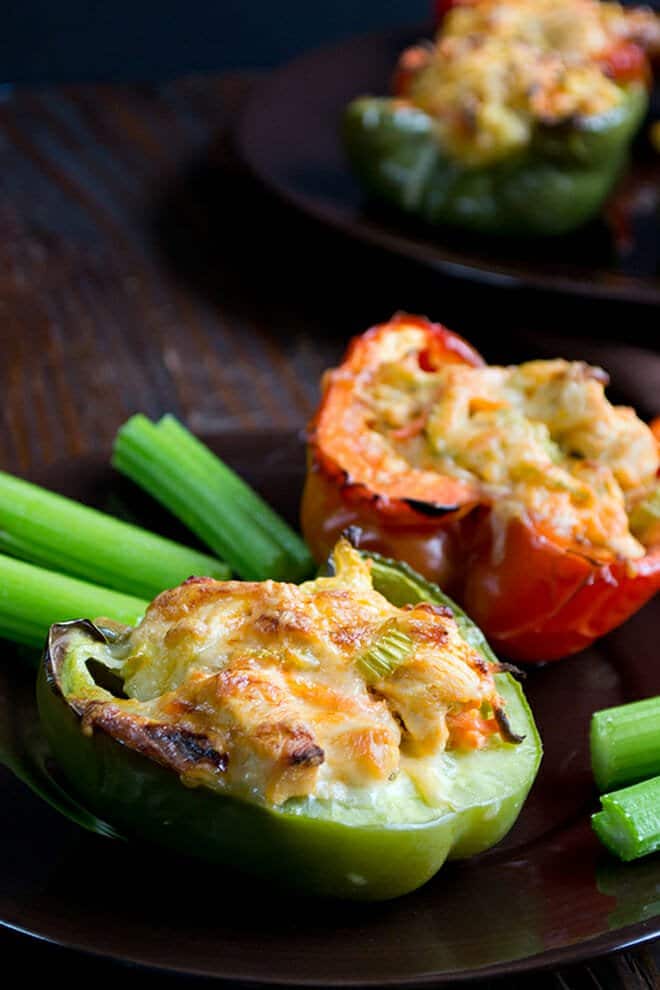 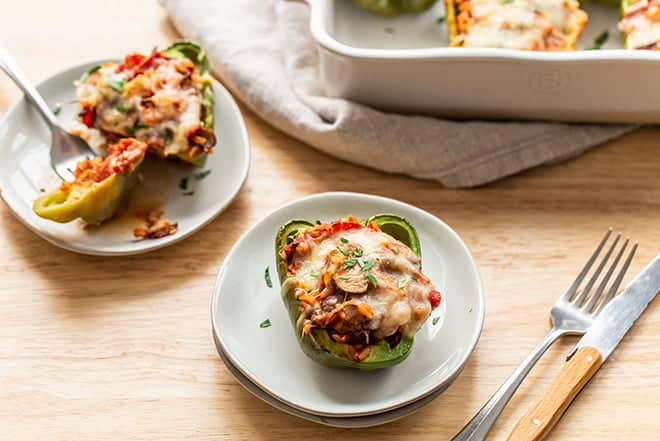 36 Responses to How To Make Stuffed Peppers