Who doesn’t like spaghetti for dinner? Well, it all starts with a great spaghetti sauce and this is the best recipe around!

Spaghetti with Meat Sauce was a standard dinner when I was growing up. We just called it “Spaghetti,” as in, “What’s for dinner, Mom?” “Spaghetti.” And that meant spaghetti noodles (none other) with a sauce made out of ground beef and tomato sauce. I don’t really remember what else my mom put in there. Were there onions? Carrots? Celery? Bell peppers? Mushrooms? Sometimes? Never? Not sure. But it was always good. And so easy to make.

I still do it today and I do adjust it based on what vegetables I have in my fridge and what ground meats I have. The basics stay the same though. It’s a simple sauce and it’s delicious every time.

Note, this is not Spaghetti Bolognese and it is not trying to be any fancy or traditional sauce. This is just a meat sauce for spaghetti. It’s what I, and probably most North Americans, think of when they hear the words “Spaghetti Sauce.”

How To Make Spaghetti Sauce

What you do is to warm up some olive oil or vegetable oil (it doesn’t matter since this isn’t a traditional Italian dish, remember?) in a large skillet over medium heat. Then you add in some aromatic vegetables. The recipe below calls for chopped onions, carrots, and celery. You can skip one or two of them if you’d like, and you can add a chopped bell pepper if you’d like. It’s pretty flexible. Once they’ve softened, add minced garlic and (optionally, if you like a touch of heat) some crushed red pepper flakes.

Cook the vegetables for another few seconds and then add your ground meat. I’ve called for half lean ground beef and half ground sausage meat (this is ground pork that has been seasoned). You can instead use ground chicken or ground turkey for all of it (this will make a leaner and slightly drier sauce) or use turkey/chicken for either the ground beef or the sausage.

If you want an even healthier option, you can mash two cans of drained red kidney beans and substitute that for half of the meat. But don’t add mashed beans now. Add them at the very end of making the sauce and then just stir them in and heat through.

Use a wooden spoon to smoosh the meat apart as it cooks. Cook until it has fully changed color, stirring and breaking it up occasionally as you go. This will take 5-8 minutes to cook.

Use your wooden spoon to move the meat mixture to the side and then tilt the pan a little towards where there is no meat. If a lot of fat pools there, take the pan off of the heat (you don’t want the grease to catch on fire while you do the upcoming steps). Working on the counter or somewhere away from the heat, use a spoon to scoop off the fat that has pooled. Spoon it into a bowl. When most of the fat has been removed, return the pan to the heat.

Once the fat has cooled, discard it. How? Where? I pour mine into an empty milk carton, seal the carton and throw it into the garbage. You could just pour it into your garbage but then, if your garbage bag gets a leak, you’ll trail grease down your driveway (and likely all over yourself, if you’re like me) on garbage day. You do not want to pour it down the drain, garburator or flush it down the toilet. The fat has a habit of clogging things and causing problems.

You’re almost done making your spaghetti sauce! At this stage you add the tomato sauce. What tomato sauce?

You can use a homemade sauce like this one. The benefits of this is that you have control over the amount of salt and other ingredients that are in there. It also tastes really great.

Or, you can instead buy tomato sauce from the grocery store. If I’m buying a tomato sauce for this kind of meat sauce, I go with something really basic. I mean, we’re adding all these veggies and meat and seasonings (coming up) so there’s no need to buy something that already has things added to it. I typically will get something like this basic tomato sauce, or even the store-brand. Lately, I’ve been getting the No-Salt-Added version, just so I have more control of the salt in the dish. If you get this one, you might need to add more salt to the recipe below.

Add in the sauce and stir.

When you add the sauce it’s also time to add some seasonings. Below I’ve called for dried oregano, dried basil, salt, and black pepper. You can use an Italian Seasoning Blend instead of the basil and oregano. Italian seasoning typically doesn’t contain salt or black pepper so you don’t need to change the salt and pepper amounts. But do read the label of yours to make sure. You’d hate to accidentally double up and make it too salty.

There’s also no real reason that you couldn’t go with different seasonings instead. If you want to make this more like a chili flavor, you could use chili powder and cumin. Rosemary and thyme would be nice as a change as well.

Add in your seasonings and then give it another stir.

Once all the ingredients are added, you just need to bring it up to a simmer and then let it cook for a few minutes to blend the flavors. Spoon it over cooked spaghetti and you’re done.

How Much Spaghetti Do I Make?

This spaghetti sauce recipe makes enough for about 8 people. To get a sense of what a serving looks like, each will have about 1/2 cup of tomato sauce and 1/4 pound of meat. That’s going to work for about 3 oz. of dry spaghetti per person (you’ll cook it before serving it though, of course). So you’ll want to make about 24 oz. of pasta (that’s 1.5 pounds or, in other words, 1 and a half (16 oz.) boxes).

Note that if you want to make this sauce stretch further, you can. I find that if each person is making their own plate and puts noodles first and then tops with sauce they take more sauce than if I pre-mix the two together. If you want the sauce to feed 10-12 people, make 2 to 2 and 1/2 pounds (32-48 oz.) of spaghetti and then mix it with the sauce before serving.

I have three additional tips to help make your pasta dinner stretch to more than 8 people:

O.K., now you should be all set for your spaghetti dinner. The printable spaghetti sauce recipe is below.

Who doesn’t like spaghetti for dinner? Well, it all starts with a great spaghetti sauce and this is the best recipe around!

This post originally appeared in January 2017 and was revised and republished in August 2021. 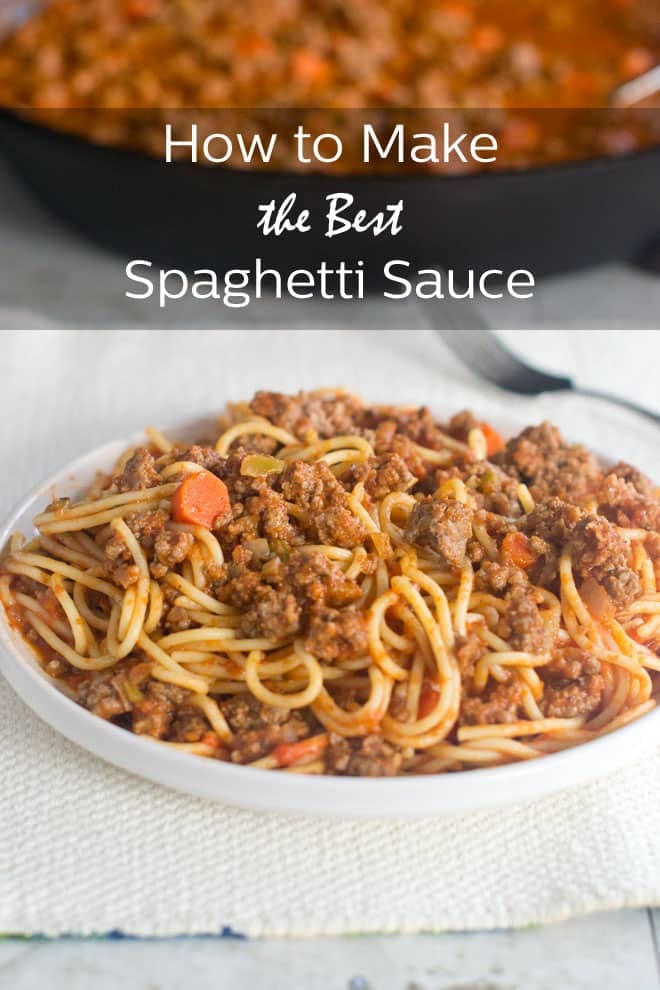 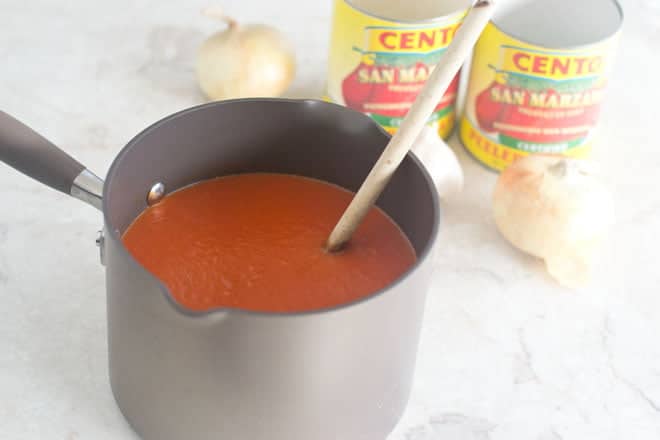 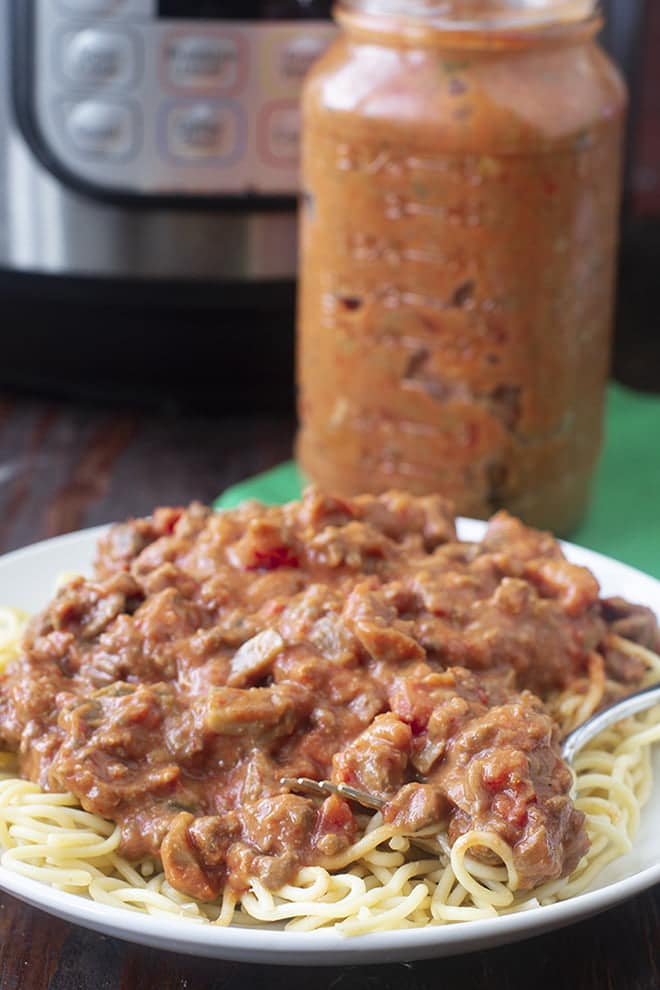 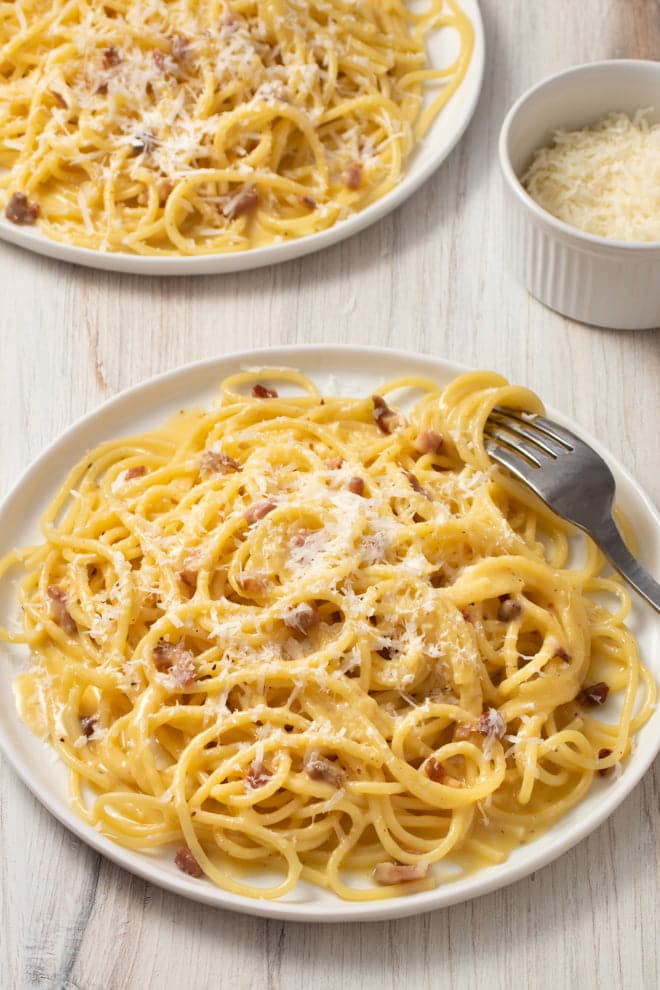 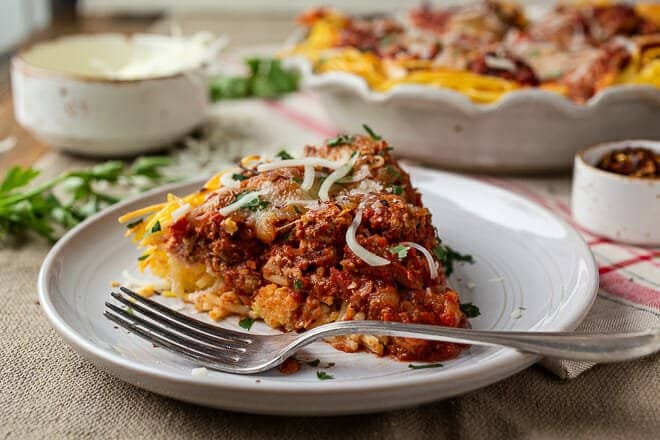