Cooking frozen lobster tails is easier than you think after being thawed. Yes, thawed. Unfortunately, there’s no way around the thawing part if you’re after succulent, tender, sweet lobster meat. Cooking straight from frozen produces a tough lobster. Thawing is easy though and doesn’t take too long.

When lobster is out of season, or if you’re looking for lobster that is somewhat consistent in price, frozen lobster tails are a great option for a variety of recipes. They can be found just about anywhere if you know where to look.

Where To Buy Lobster Tails

You’ll most always find the best price at your local fish monger. If you don’t have one nearby, wholesale food clubs and local grocery stores will often carry frozen tails at the seafood counter or in the frozen food section. If you don’t see them, ask. Because lobsters are expensive, some grocery stores keep them in the large walk-in freezer behind the counter to prevent theft.

You can also order frozen lobster tails online, but check prices because they vary greatly. Popular steak and seafood mail order companies tend to have higher prices than other online specialty markets.

You might also find thawed lobster tails at the grocery store or fishmonger. I don’t recommend buying these because you never know how long they’ve been sitting in the case. Fresh is the key when it comes to lobsters! You always want to take them home alive, frozen, or already cooked. In the case of lobster tails, frozen is the best option.

Lobster tails are available as cold water and warm water varieties. Cold water lobsters are caught in the cold waters of the Atlantic Ocean in places like Canada, Maine, and coastal New England. Warm water lobsters are caught off the coast of Florida, the Caribbean, California, and similar tropical or areas with warmer waters. Sizes vary greatly, but are typically available between 4- and 8-ounce tails.

How To Thaw Frozen Lobster Tails

Since I found that you do indeed need to thaw them first, I tested two ways to thaw the lobster tails: cold running water and refrigeration. I prefer letting them thaw in the refrigerator for a couple of reasons. Although it takes a little longer (but not by much), it’s the safest way to thaw seafood.

Thawing in running water can introduce unwanted water into the cut-end of the tail that could interfere with cooking. Thawing in the refrigerator prevents this. You can expect the tails to take a few hours to thaw in a cold fridge, so I usually let them sit on a sheet pan in the fridge overnight.

Once the thawed, I tested multiple methods to see which truly produced the most tender and flavorful lobster meat.

While boiling, broiling, and roasting all worked, poaching resulted in the most tender lobster. Just as important, it allowed for the maximum aromatics and flavors to be added. The other methods not only took longer, they also didn’t give much opportunity to flavor the lobster meat, except on the outside. In addition, with roasting and broiling, the tails aren’t in the oven long enough to impart any “roasted” flavor. Plus, any meat that was exposed to the hot oven air became dry and chewy.

You can also check out this method for Lobster Tails on the Grill for something a little different.

Low, slow, gentle heat keeps the lobster meat tender, which is why poaching is the best option for the tails. And since poaching involves gentle cooking in liquid, the liquid can be flavored with anything you’d like.

How To Cook Lobster Tails

To get the most flavor into the lobster tails while poaching, I first cut away the middle undershell with clean kitchen scissors, exposing the meat to allow flavors to seep into it. Cutting this part away also helps make eating the lobster tails at the table a lot easier, and makes it easy to remove the tail meat in one piece. It also keeps the pretty red shell intact for presentation. (See video below.)

Once the tails have been skewered, set those aside and prepare the poaching liquid. In this case, it’s butter, and lots of it, with garlic and herbs. Not only is the butter infusing flavor into the lobster, but the lobster will also impart its flavor into the butter. After poaching, the lobster-infused butter can then be used for dipping or saved in the fridge up to 5 days for other recipes. The butter can also be frozen up to two months.

You can add other aromatics to the pan as well. Some of my favorite combinations are sliced fennel bulb and a splash of vanilla extract; chipotle in adobo and lime zest; and onion, bay leaf,  green bell pepper, and coconut milk.

In a straight-sided skillet or wide saucepan (the pan should be wide enough to place the lobster tails flat in the pan), add the butter, garlic, thyme, salt, and pepper. Cook this on low heat, swirling the pan every now and then until the butter is completely melted. You might start to see some white solids in the pan. This is just the milk solids beginning to separate and perfectly normal, it won’t affect the flavor. Do not let this boil or the butter will turn into browned butter.

As soon as the butter has melted, add the lobsters, cut-side-up, and baste the exposed tail meat with the pan butter. Cover the pan and poach for 10 minutes or until the internal temperature of the lobster meat registers 135° F, or 140° F for a firmer texture, on an instant-read thermometer. It’s important the butter never boils, so check by listening or removing the pan lid and adjusting the heat as needed.

Transfer the lobster tails to a serving platter or to plates and serve immediately with some of the melted butter from poaching.

It takes a lot of butter for the poaching, so the leftover butter can be transferred to a glass or ceramic container. Store in the refrigerator, covered, up to five days, or in the freezer for up to two months. It can stay frozen for longer, but I’ve found that, even if covered well, the butter tends to take on flavors and smells from the freezer.

Save the lobster shells, too! You can store them in a zipper bag in the freezer for up to a year. The shells can be used to flavor seafood soups, bisques, stews, and sauces.

After thawing in the refrigerator for a few hours or overnight, frozen lobster tails are best prepared by poaching in butter. Here’s how.

If desired, after step 1, insert a wooden skewer through the tail meat to keep it from curling during cooking. 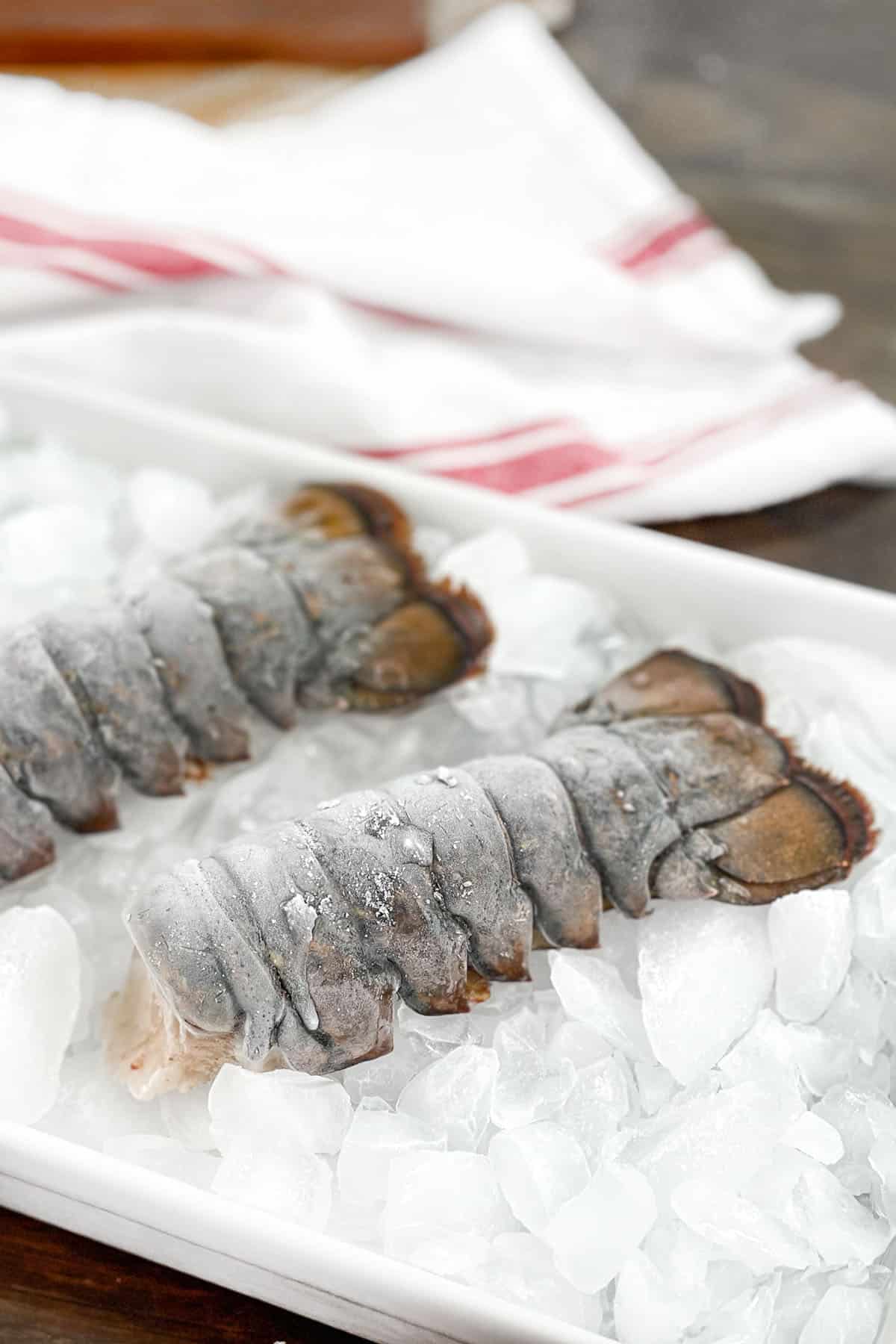 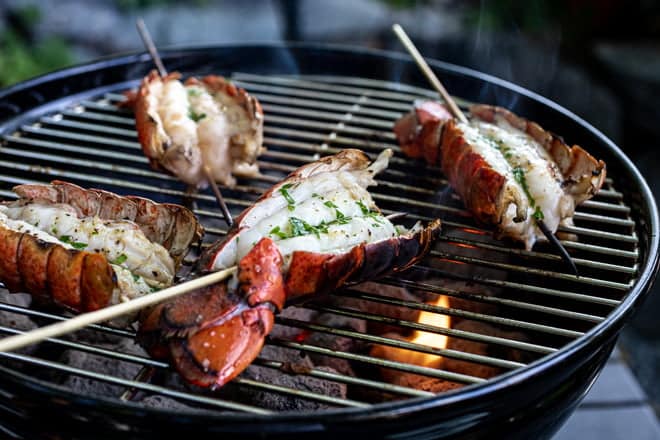 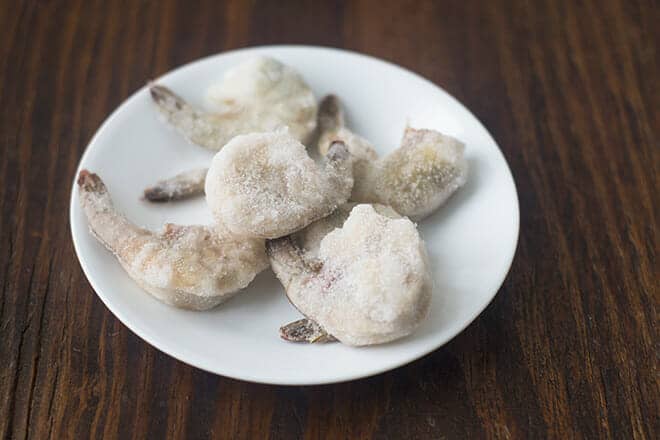 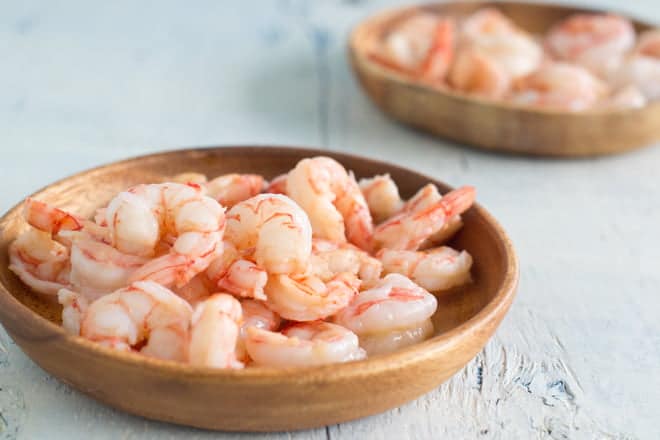