Game Day is around the corner. In that spirit, I’m thinking a lot about dips. Today I’m sharing a guacamole recipe that doesn’t use avocadoes. It uses edamame instead. Find out why below! 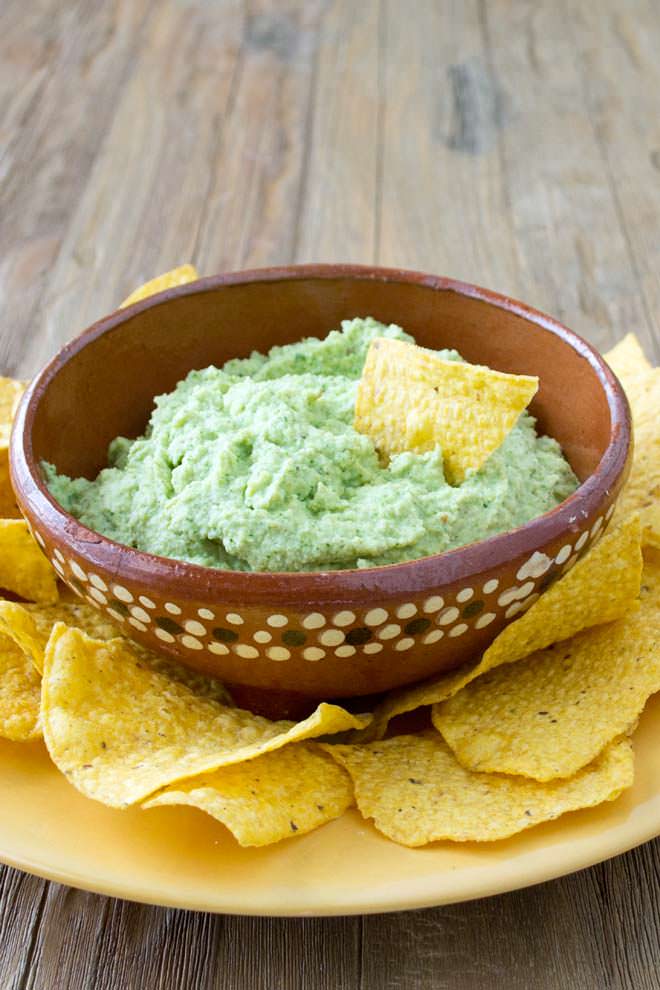 Pin this recipe to your Dips Board!

The Hubs and I were at IHOP for breakfast with the kids. I was telling him that I couldn’t come up with a good idea for a Guacamole recipe. I said, “What on earth can I do? Guacamole pizza? Guacamole fries? Nothing sounds good!”

He laughed and said, “If you ask me, the best Guacamole would be one without avocados. I can’t stand those things!”

At first I didn’t take him seriously. I was like, “Yeah, yeah, funny. I knew you wouldn’t be any help with this one.” But then inspiration struck me.

“Or maybe you’re the best help in the world! Guacamole without avocados! But how to do it? White bean dip with green food coloring?? Ewwww.”

My ever-brilliant (and not-at-all-sarcastic husband) responded, “Wouldn’t it be easier, and less gross, to use a bean that’s already green? An edamame dip, perhaps?”

And that’s what I did. I came up with a dip recipe with edamame as the main component!

Frozen shelled edamame simmered in water and then puréed with Mexican flavorings like cilantro and lime juice. 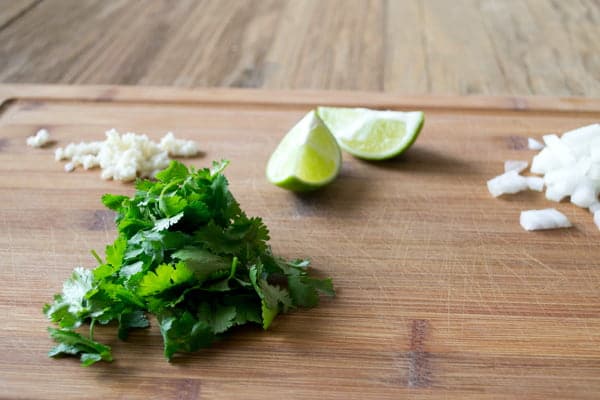 The result is delicious and really cool. It looks a lot like Guacamole, has a smooth texture that’s similar to Guacamole but it tastes…well…it tastes like guacamole would taste if it didn’t have avocadoes in it. 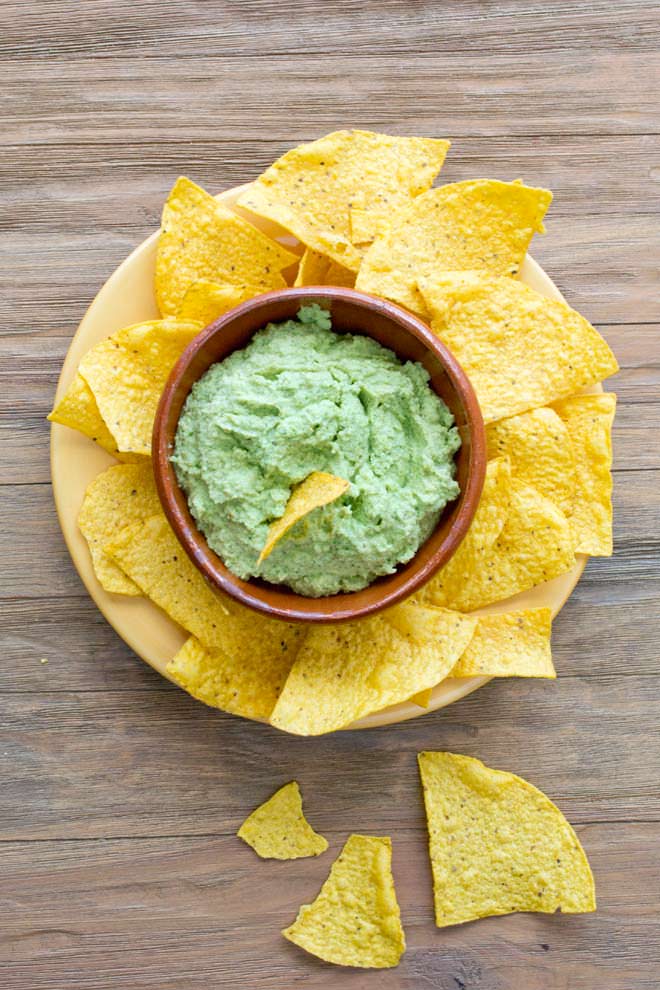 I know that’s hard to imagine. But I’ve gotten many people to try it now and all of them are like, “Wow! That’s good. Hmmm…it tastes like…like…just like…ummm…Guacamole without the avocados.”

A side bonus of this recipe with edamame, let me just say, is that it has way less fat than guacamole, and also packs a good protein punch, making it a great alternative to guacamole not only for avocado-haters but also for those of us who are trying to keep those fat grams low.

If you’re on the lookout for a dip to serve alongside the edamole, try out this Hamburger Dip. It’s like a queso with ground beef in it. It has some salsa mixed in so the flavors will go just right with the non-guac. And you know you’ve gotta sneak those fat grams back in somewhere, riiiiight? 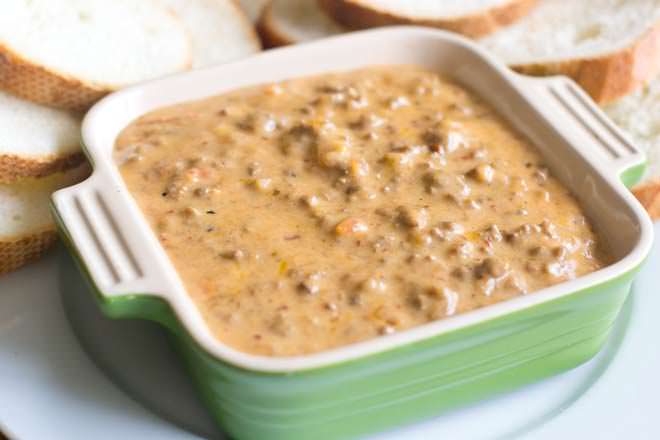 And now here’s the recipe for guacamole without avocadoes. Enjoy and have a great day!

This easy Mexican dip is a great alternative to Guacamole for anyone watching their weight or for those who don’t like avocados. 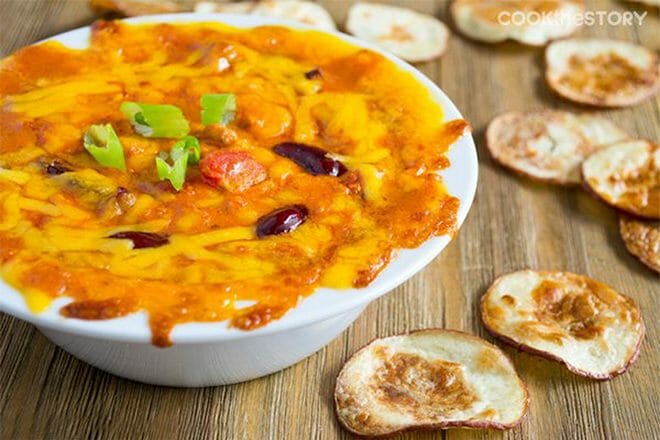 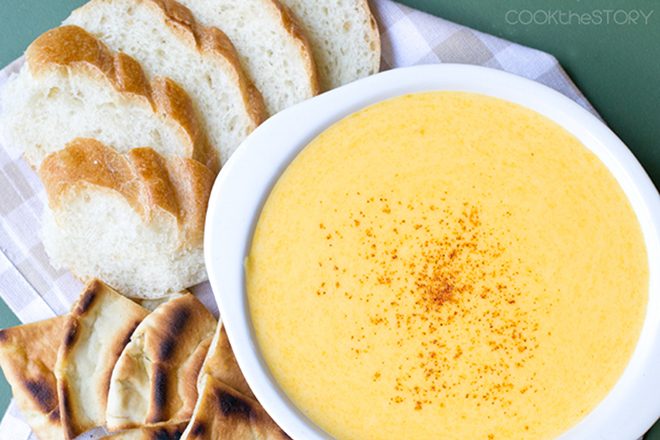 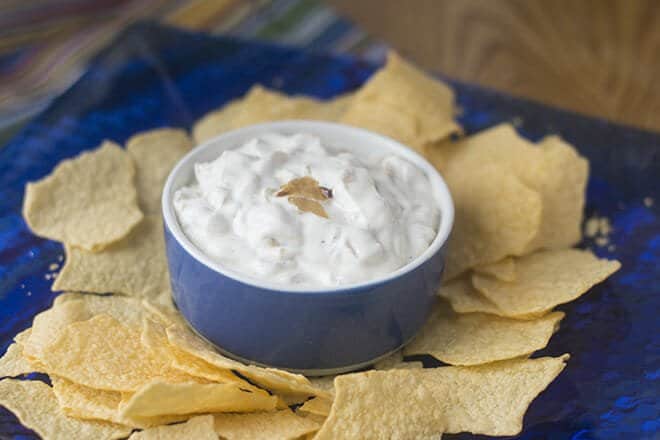