Learn how to make delicious carne asada without any hard-to-find ingredients. Enjoy on its own or in tacos!

There are many versions of carne asada and in my quest to develop the best recipe, I’ve found what is required to make it the best for me. The best carne asada needs a flavorful marinade without complicated ingredients, tender grilled beef with a bit of char, and a great sauce to accompany it.

Table of Contents show
What Is Carne Asada?
The Marinade
How To Prep And Marinate
How To Cook The Skirt Steak
Serving Carne Asada
Carne Asada Recipe

What Is Carne Asada?

Carne asada is grilled and sliced meat, often chuck steak, flank steak, or skirt steak. Although it can be prepared a variety of ways, the most popular, especially here in the U.S., is using skirt steak. It gets marinated in a combination of chili peppers, citrus, salt, and garlic, along with a few other flavor boosters before grilling. This grilled meat can be served on its own or as part of other dishes, like burritos or quesadillas.

I’ve been making this Serious Eats version for years, and it’s one of my favorites, but in my area it’s often difficult to find all of the dried chilis called for in their recipe. I developed a simpler carne asada recipe that takes less time, and still delivers all of the flavor, using a few shortcuts and ingredients that you can most always find in a standard grocery store.

My simplified carne asada marinade took all of the heavy flavor hitters and put them together, leaving out anything that might not stand a chance, like delicate cilantro, and a few other spices that, in my experience, become lost in the marinade.

My version is made with a combination of lime juice, orange juice, garlic, brown sugar, soy sauce, and salt. Serious Eats calls for fish sauce, which I’ve replaced with Worcestershire sauce. It has some of the same umami characteristics and it’s always in my pantry or refrigerator, unlike fish sauce, which I rarely use in my cooking.

And instead of gathering multiple varieties of chilis and toasting them, I’ve simply used a few chipotles from a small can of chipotle in adobo. It provides the heat and depth of flavor the marinade needs, without having to track down the chilis online or fuss with the oven. If you’re not big on spicy foods, you can reduce the amount of chipotles from five to two or three. You’ll most likely have a few chilis remaining in the can, along with the adobo sauce. Transfer any extras into a glass or ceramic container, or a freezer bag, and keep in the freezer up to six months to use with other recipes like this Southwestern Steak Salad.

How To Prep And Marinate

Add all of the marinade ingredients directly to the pitcher of a blender, then cover and blend on high speed until smooth. Pour half of the marinade into a gallon zip-top bag and set that aside. Save the other half in the refrigerator for later when you make the crema sauce.

Cut the skirt steak into manageable 5-inch pieces along the grain. You can find a detailed “how-to” in my How to Cook a Skirt Steak Perfectly post, and add the steak pieces to the bag with marinade. Remove as much air from the bag as possible, seal tightly, and give it a few shakes and squishes to distribute the marinade all around the pieces of steak. Refrigerate this for at least three hours. You can marinate it for longer, but , as with the folks over at Serious Eats, I’ve found that more than three hours doesn’t actually do much.

About an hour before you’re ready to grill the steak, take it out of the refrigerator and let it sit at room temperature. Yes, this is perfectly safe, and it will help it cook faster and more evenly on the grill since it won’t be as cold as if you went from fridge directly to the grill.

While that is coming up to room temperature, make the chipotle crema, which can be used as a dip or drizzle for the skirt steak. To make the cream, mix together the half of the marinade that was set aside in the fridge (the half that never touched the meat) with 16 ounces of sour cream. If you were sad about the cilantro being omitted from the marinade earlier, add some to this crema now, about 1/4 cup of chopped fresh cilantro leaves. Cover and refrigerate the mixture until ready to use so the flavors can meld.

How To Cook The Skirt Steak

Next, get the grill ready. Whether gas or charcoal, the grill should be prepared for high heat cooking. Because the marinade has some sugar in it, you’ll want to remove any excess marinade from the steaks to prevent it from burning. Just use your hands to smooth off most of the marinade. Any that is still clinging to the meat is fine.

Place the skirt steak pieces on the grill, and cook, turning occasionally until charred on both sides and the internal temperature registers 112°F on an instant-read thermometer inserted into the thickest part of the steaks. Carryover cooking will bring this up to a nice medium-rare which is perfect for this cut of beef. But, if you like it more well-done, you can cook it longer. Since the meat is going to be sliced thinly, it is very forgiving if you like yours less pink.

Transfer the steak pieces to a cutting board, and let them rest for about 5 minutes. Then slice thinly, against the grain. Note that skirt steak is a bit tricky in this respect since the grain runs opposite to how it runs in many cuts, like flank. Have a look at the skirt-steak-slicing instructions over here to make sure that you’re slicing it correctly.

If you’d prefer to not use the grill, you can cook the carne asada on the stovetop, following the instructions for cooking skirt steak in a large skillet on the stove over here.

Serve your grilled meat immediately after slicing, along with the chipotle crema. Enjoy the carne asada as tacos with warm tortillas, sliced avocado, fresh pico de gallo, and more fresh cilantro. It can also be enjoyed in many other ways such as in burritos or on nachos.

Let me know your favorite way to serve carne asada in the comments below. Enjoy! -Christine xo

Refrigerate or freeze the remaining chipotle in adobo for other recipes. 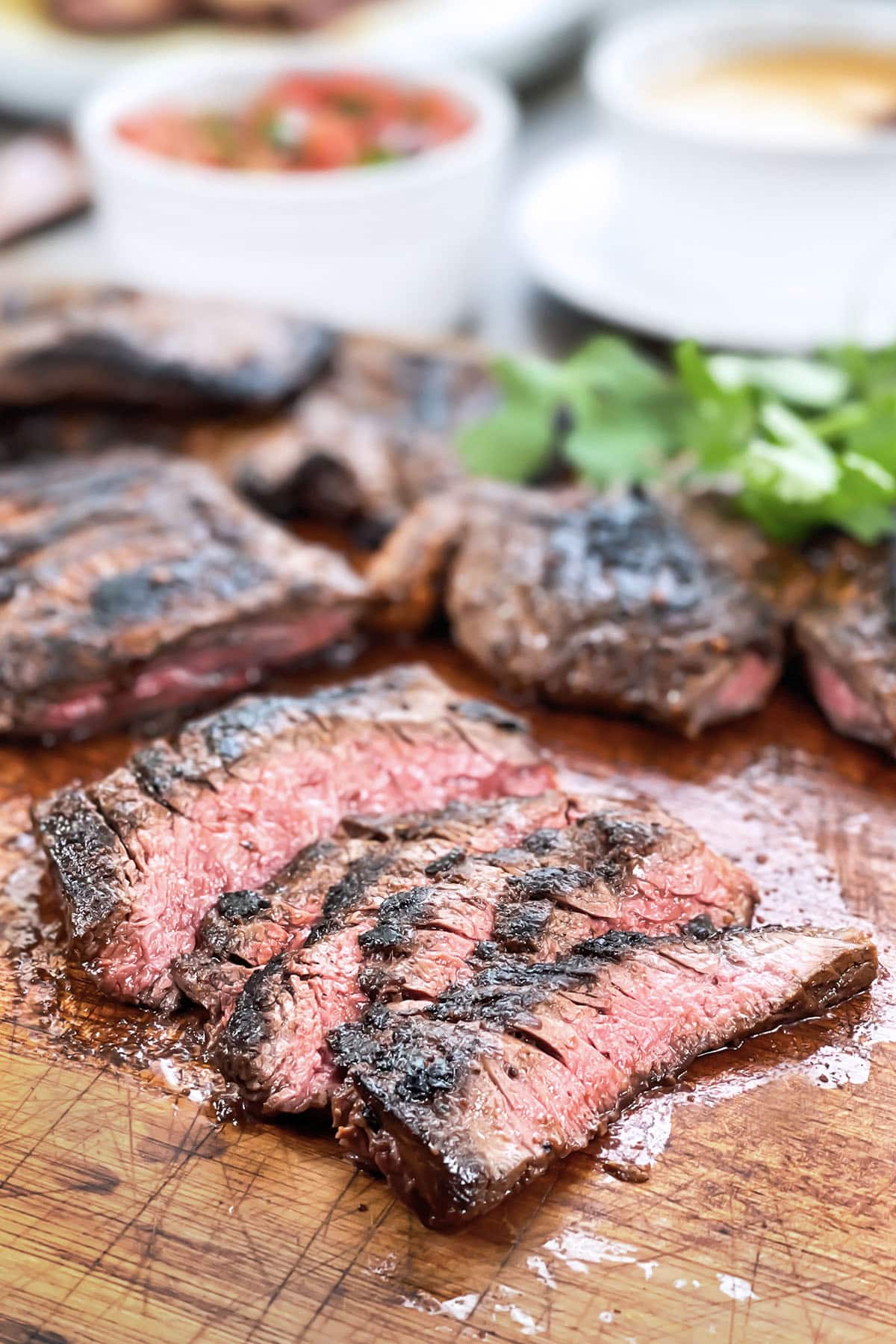 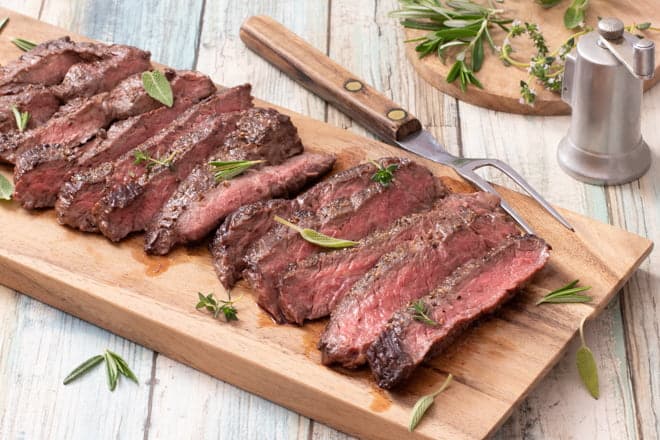 How to Cook Skirt Steak Perfectly 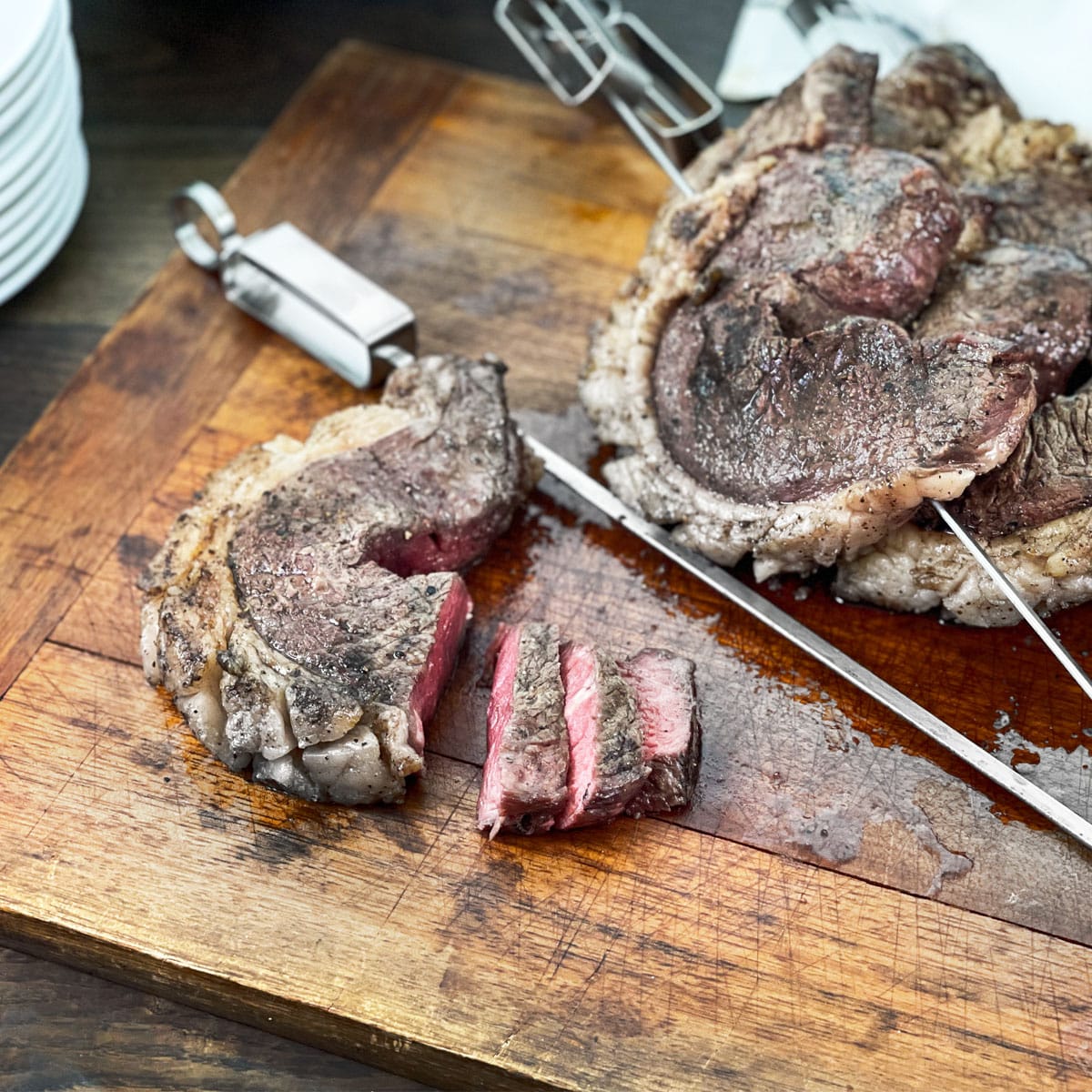 How to Cook Picanha Steak 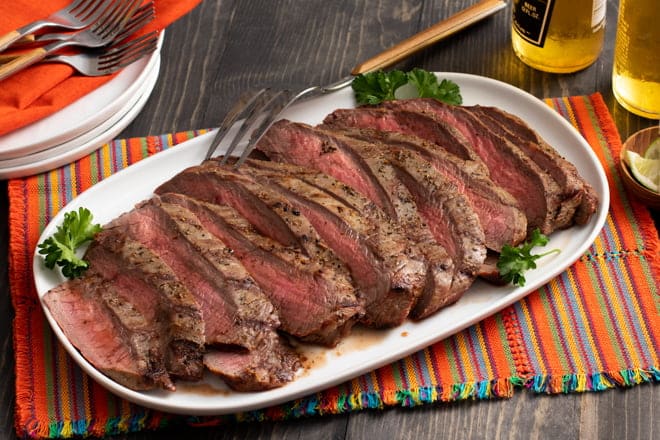 How to Cook Flank Steak Perfectly 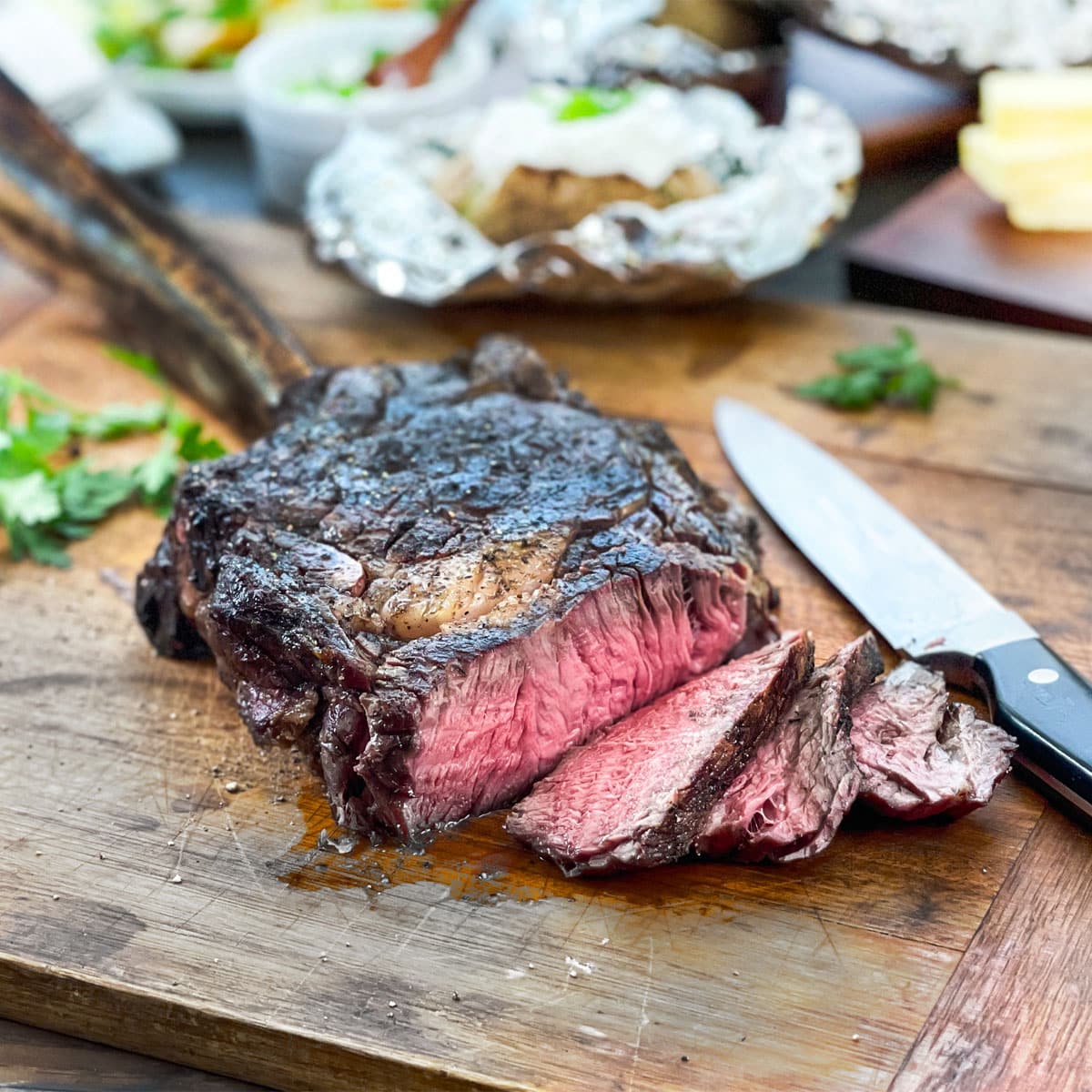 How to Cook Tomahawk Steak Perfectly