Pizza Soup has all the flavors of pizza in a bowl, with a side of mozzarella cheese toast for that stringy cheese factor. Plus, it’s ready in fifteen minutes.

What happens to you when you’re really craving something? Me, I *need* to have it right then. It’s all I can think about.

One of the things I crave most is cheese. Especially melted cheese. Don’t tell anyone but sometimes I put a slice of cheese on a plate and microwave it then eat it with a fork. Melted cheese on a plate. Just like that. It’s not something I’m proud of.

I need better ways to deal with my need for melted cheese. Which is how I came up with today ‘s recipe for Pizza Soup.

Let me say that again. 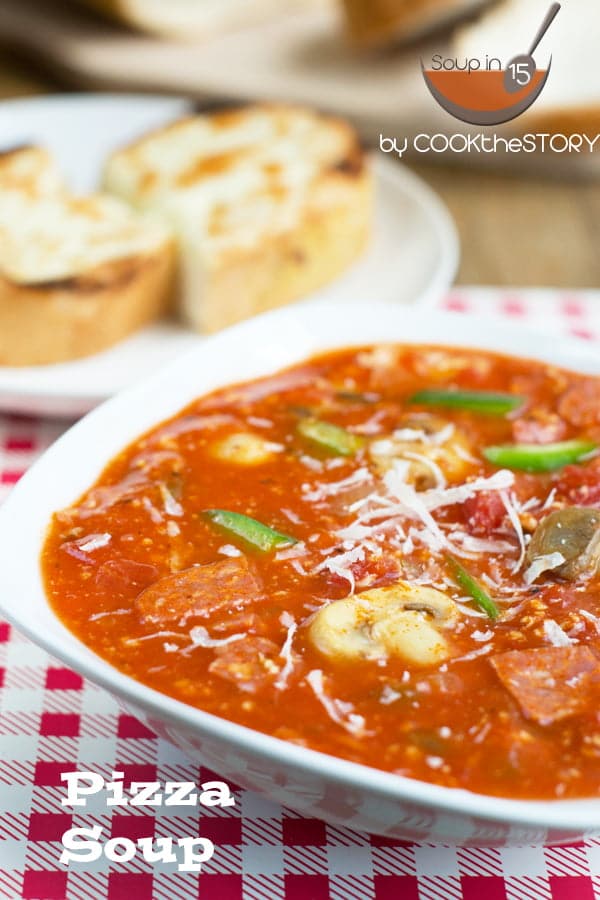 It’s amazing. All the cheesy, tomatoey, meaty, veggey flavors of pizza in a bowl, with a side of mozzarella cheese toast to kick my craving in the butt.

The best part is that this soup is ready in under 15 minutes. Now that may not be as quick as microwaving a slice of cheese but it sure is quicker than delivery AND quicker than cooking a frozen pizza.

The liquid for this soup is part beef broth (for extra meaty flavor) and part tomato sauce (for pizza flavor). To that you add canned diced tomatoes, black pepper and oregano. While that’s heating up you saute some sliced mushrooms, green pepper and onion. Add some pepperoni and pre-cooked bacon to the veggies to heat them through and then stir it into the hot soup. Garnish with cheese and the soup is ready!

While the soup is cooking you toast some bread, add some mozzarella to it and then broil it until melted. The bread + cheese  alternating with the soup makes it really taste like you’re eating pizza. I’m in love with this soup! 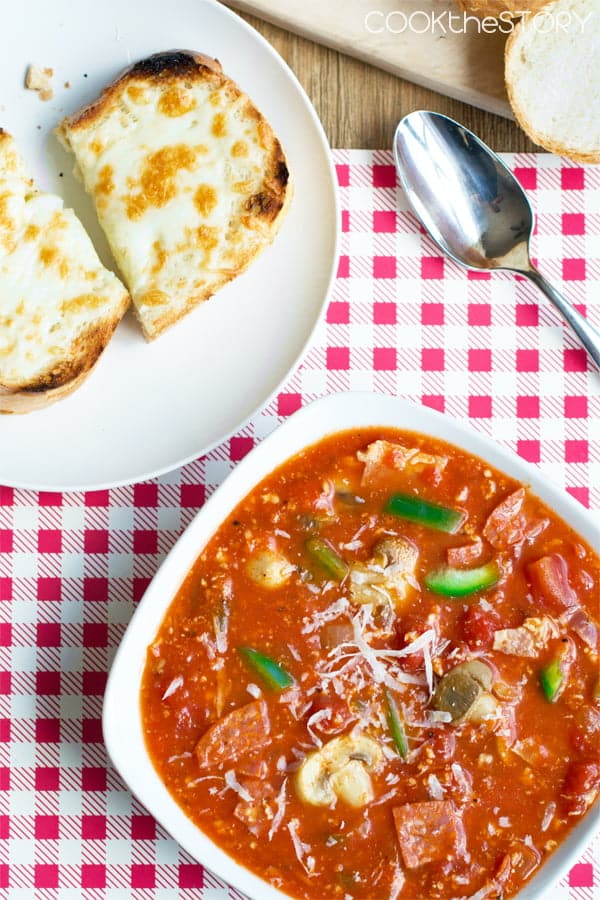 The SouperTip that makes this soup so delicious so quickly is the use of lunch meat or cold cuts, in this case, pepperoni. Lunch meats don’t need to be cooked. They are therefore a quick way to add flavor and protein to your soup recipes. Pepperoni is ideal for this soup because it’s a Pizza Soup. But I often use ham as the main meat in a soup. Another great one to try is chopped up salami, the kind that has lots of black pepper. It adds a ton of flavor to your soups with very little time needed on your part.

If you like the idea of this soup, I bet you’ll also like my recipe for Slow Cooker Roasted Red Pepper Soup. For this one you actually roast the peppers in the slow cooker first. Then remove the peels, return the peppers and any juices that dripped off into the slow cooker. You add some more ingredients, puree it and let it heat up. Like today’s recipe it has toast on the side, this time topped with goat cheese and chives. Yum!

O.K., let’s think about pizza in a bowl again… 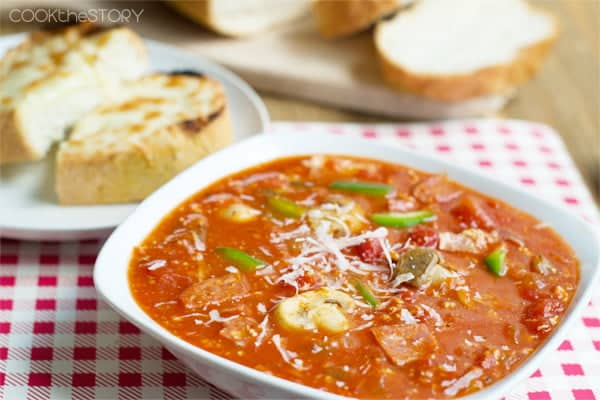 And now, here’s my quick Pizza Soup Recipe. See you in 15!

This quick and easy soup has all the flavors of pizza in a bowl. It’s served with mozzarella cheese toast. The soup and toast are both ready in under 15 minutes making this a perfect meal for a busy weeknight. Or for you family’s next pizza night! Note: To make this recipe in 15 minutes, read through it before you begin and gather together all of the ingredients, tools, pots and pans that you will need. You do not need to prep any ingredients though. All prep is within the instructions of the recipe and count towards the 15 minutes.