This oven-roasted Chinese BBQ Pork recipe, based on traditional Cantonese roast meat, is easy to make and enjoy at home. 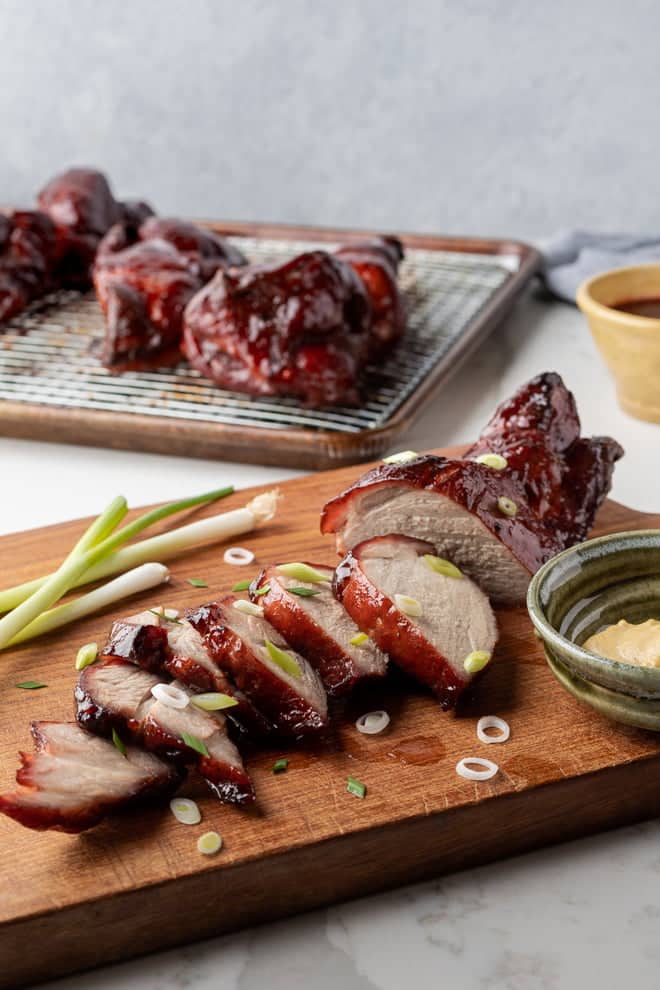 Roasting is one of my favorite ways to prepare meats – and veggies for that matter. For a traditional roast pork dinner, I use this method which employs a reverse sear process.

The roasting method for this bbq pork recipe is a bit different but equally delicious in a cinnamony, sweet, salty way.  The traditional cooking method for Chinese BBQ Pork, or Char Siu, is to thread strips of pork on metal forks and then cook them over a fire. Because I don’t generally have the time to stand over a fire and turn strips of pork threaded on metal forks, I decided that roasting the pork was a much easier way to enjoy this dish. After the pork has been marinated in a uniquely spiced mixture, it’s slow-roasted and basted several times resulting in a tender interior and an ooey-gooey slightly sweet, perfectly salty glaze on the exterior.

You can also grill the pork using the indirect cooking method used to cook The Whole Grilled Chicken and Grilled Spatchcock Chicken. An important note here: don’t skip the drip pan under the pork. As you baste the pork with the glaze, it tends to run down the sides of the meat and into the grill making quite a sticky mess.

There are a couple of ingredients in this recipe that I want to point out. The first is the five spice powder. This contributes to the defining flavor of Chinese BBQ Pork. So, whatever you do, don’t leave this ingredient out. Most grocery stores carry this blend, so there’s no need to go to a specialty shop. If you can’t find it,  Serious Eats has a great recipe that you can make at home.

The second ingredient note is on the red food coloring. This is completely unnecessary but does create a really beautiful glaze and the tell-tale red ring around the pork. I know that there’s a lot of discussion around red food coloring, so if you’re in the no-way-in-the-world-will-I-use-that-stuff camp, eliminate it from the recipe.

The third note on ingredients is about the Chinese wine or sherry. If you don’t use alcohol in your cooking, replace this ingredient with equal parts of orange or pineapple juice.

I personally like to allow the pork to marinate for the full 12 hours, but you will get good results if you only have time to marinate for 4 hours. If you’re going to serve the glaze alongside the pork for dipping, don’t forget to boil it. It’s not necessary to boil it when using it during basting because it will be heated to a safe temperature while the meat roasts.

Chinese BBQ Pork can be served as an appetizer with a spicy mustard sauce and the glaze. Serve it as a main dish with cooked rice and steamed bok choy or broccoli.

If you happen to end up with any leftovers, replace the shrimp in this recipe with the bbq pork to make pork fried rice.

This oven-roasted Chinese BBQ Pork recipe, based on traditional Cantonese roast meat, is easy to make and enjoy at home.

To cook on a grill, heat the grill to medium and set up for indirect heat. (This post {https://cookthestory.com/whole-grilled-chicken/} walks you through how to set up your grill) And cook until an instant-read thermometer reads 145˚ – 160˚ F.

Important: Don’t skip the drip pan under the pork cook on the grill. As you baste the pork with the glaze, it tends to run down the sides of the meat and into the grill making quite a sticky mess.