This hashbrown casserole is the best because it’s super-cheesy and delicious, but it’s made from fresh (not frozen) potatoes, and an easy homemade cream sauce (not canned soup). Oh, the edges get brown and crispy and extra tasty too!

Summary: To make this casserole, you’re going to shred about 6 potatoes using a box grater and then soak them in water. While they soak, you’ll make a quick sauce of sautéed onions and butter, flour, milk, salt, and pepper. To that you’ll add the drained potatoes and shredded cheese. That then goes into a lightly greased 9×13 baking dish and into the oven to bake for about 40 minutes. You finish it by adding more cheese on top and melting that. Add some chopped green onions and dig in! There are more details below, or to quickly get to the recipe, click here and jump to the recipe.

Because Cheesy Hashbrown Casserole is such a basic thing, I wanted my version to use ingredients that I always have on hand. I don’t ever buy frozen hashbrowns, so I never have them in my freezer, and so they are never on hand for me. That’s why this version uses fresh potatoes.

But trust me, using fresh potatoes is not going to make it difficult at all. You don’t even have to peel the potatoes. Just quickly grate them on your box grater, using the same side that you’d use for shredded cheese. I do rinse the potatoes before shredding them, and scrub if needed. Also, as soon as they’re shredded, put them into a big bowl of cold tap water and swish them around. Drain those using a big colander, and then put the potatoes back into the bowl with more cold water and set them aside while you make the sauce.

How Many Potatoes Do You Need?

The recipe calls for 2.5 pounds of baking potatoes (russets and Idaho potatoes are great). If you don’t have a scale, that’s going to be about 6 medium-sized potatoes. The other way to know if you have enough is to measure them in a measuring cup. It’ll be about 6 cups once they’re shredded. If you end up with a bit more than that, that’s fine. You just don’t want less.

Can You Use Frozen Potatoes

Yes. Get some frozen hashbrown potatoes and use them straight from frozen. You’ll keep them in the freezer until your sauce is made. Then stir them, still frozen, into the sauce in the skillet. Here’s how to make the sauce…

I don’t typically have canned condensed soup on hand. If I do, then I make the hashbrown casserole in this traditional canned soup way, which you can get the recipe for here.

But what I usually do is to make my own sauce. It’s really easy and quick. It’s essentially Béchamel sauce, which is just a fancy word for a basic white sauce. But it’s made simpler because you’re sautéeing onions first. You see, you sauté up two chopped onions in some butter, and then once you add the all-purpose flour, the onions help to make it distribute evenly throughout without clumping up.

Then you add some milk to that, along with salt and pepper. Stir it over medium heat until it thickens up. It won’t take long, 2 minutes. That’s your basic white sauce that you’re using instead of the canned soup. Pretty easy, right?

Since you already have the sauce in a big skillet, it makes sense to heat up the potatoes in there too for a bit. The reason is that the heat will penetrate the potatoes more quickly in a skillet on the stove where the heat is more direct than if you put the room temperature potatoes into a casserole in the oven, where the heat is circulating around. So this actually saves you a bit of time.

What you’ll do is to drain your potatoes. Squeeze them a little to remove excess water, but you don’t need to pat them dry or anything. The stir the potatoes into the sauce. Sprinkle them with some salt and cook, stirring for a few minutes, until the potatoes are heated through.

Then add in some cheese. Scoop it all into a 9×13 inch baking dish. I lightly grease the dish first. Smooth out the potatoes, but don’t pack them down. If you pack them down, you’re making it denser and harder for the heat to penetrate and cook through the potatoes.

Cover the dish with foil. Bake it until it bubbling, the edges at the top are a bit brown, and if you taste some potato from the middle, it’s nice and soft (just be careful because it’s hot!). That’ll be about 40 minutes.

Finally, you’ll add more cheese on top, and bake it until it’s melted, bubbling, and starting to brown. By then the edges that are in contact with the dish will have browned up a bit too. I’m putting some pictures taken with my phone for you below that show how what a nice crust you get along the outside edges. Mmmmm.

What Kind of Cheese To Use

I use shredded cheddar cheese for mine. It’s just so classic looking and tasting, like the Cracker Barrel version, you know? But any cheese that melts will work. Mozzarella or an Italian blend, a Mexican shredded cheese blend, shredded provolone, Swiss, anything like that. And any mixture would be good too.

For the cheesiest cheesy hashbrown casserole, you can mix in some velveeta or cream cheese, in addition to the cheese called for. Add 1/2 cup when you stir in the cheddar cheese.

What Size Baking Dish To You

I noted above to use a 9x13inch baking dish. That is how I cook it. Crucially, whatever sized dish you use, the potatoes should not be packed into it. They need to be just scooped in and lightly spread out. If you pack them in, it will be harder for the heat to penetrate and for them to cook through.

It’s also important that the potatoes not be too deep. The ideal depth is 1 inch or slightly less (remembering not to pack it in). If your layer of potato is more than that, it will be too thick to heat through and cook the potatoes.

Note that you can also bake your cheesy hashbrown casserole straight in the skillet you used to make the sauce, if the skillet is oven-safe. Just make sure that the guidelines I just listed are still followed. Don’t pack it in, just smooth it out. And after you smooth it out, make sure it isn’t more than an inch thick. If it’s thicker, use a baking dish with a larger surface area so the potatoes can spread out more.

This can be made-ahead, yes. The best way to do it is to make the whole thing, and bake it too. Then cover it and refrigerate it for up to two days. When you want to serve it, cover it with foil and bake it at 350F just until heated through. That will take about 25 minutes.

If you want to assemble the casserole but not bake it until it’s time to serve it, you can do that as well. The only issue is that you’ll be going straight from the fridge and so everything will be really cold. It will therefore take longer for it to heat up and thus for the potatoes to start cooking. The best thing to do is to set the oven to 350F and get the covered casserole in there right away, no need to wait for it to pre-heat. Cook for 30 minutes at 350F, then increase the heat to 400F. Cook for another 30 minutes covered. Taste it then to make sure that the potatoes are soft. Once soft, top with more shredded cheese and bake uncovered until melted and starting to brown, about 15 minutes.

This hashbrown casserole is the best because it’s super-cheesy and delicious, but it’s made from fresh (not frozen) potatoes, and an easy homemade cream sauce (not canned soup). Oh, the edges get brown and crispy and extra tasty too!

*2.5 lbs of baking potatoes is about 6 medium potatoes. Once shredded, that will yield about 6 cups. If you have a bit more than that, it will be fine. But you don’t want any less. I use russet or Idaho potatoes for this. 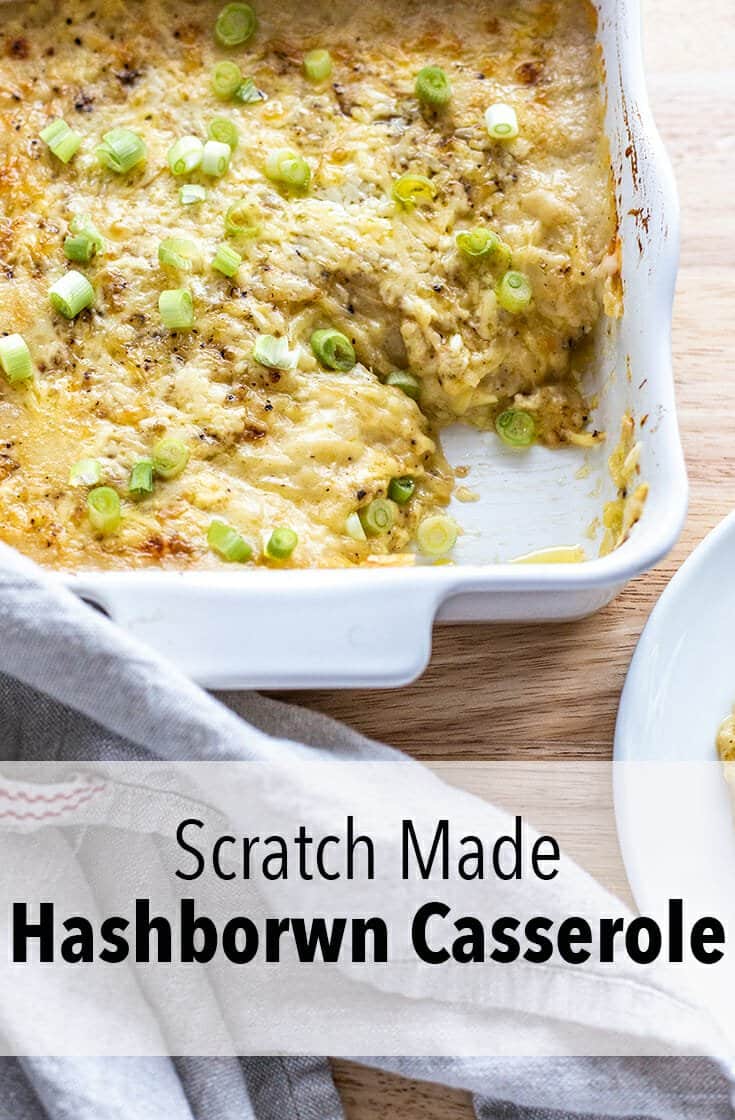 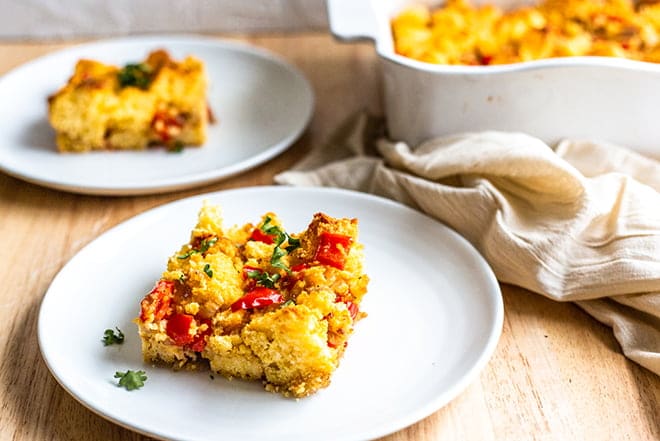 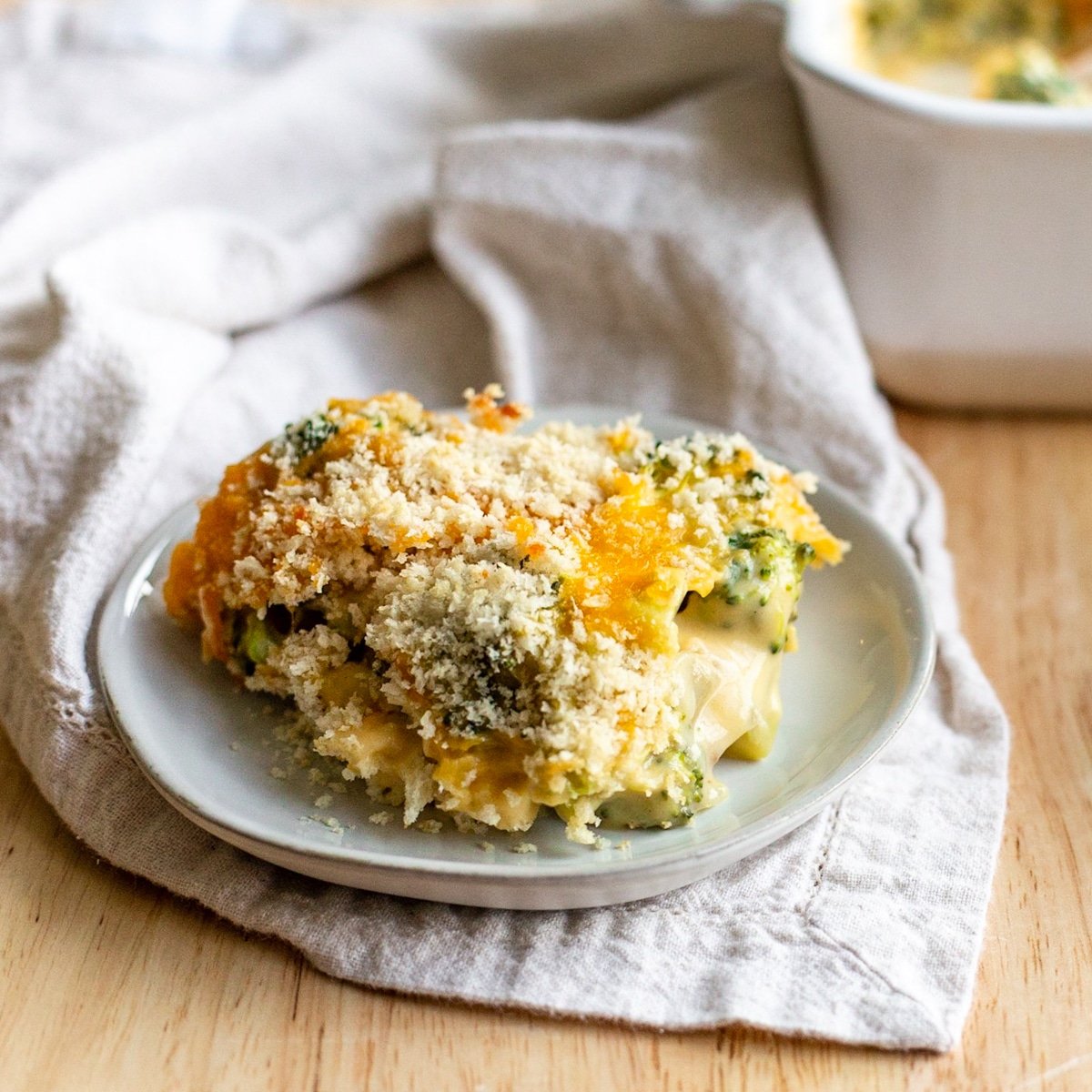 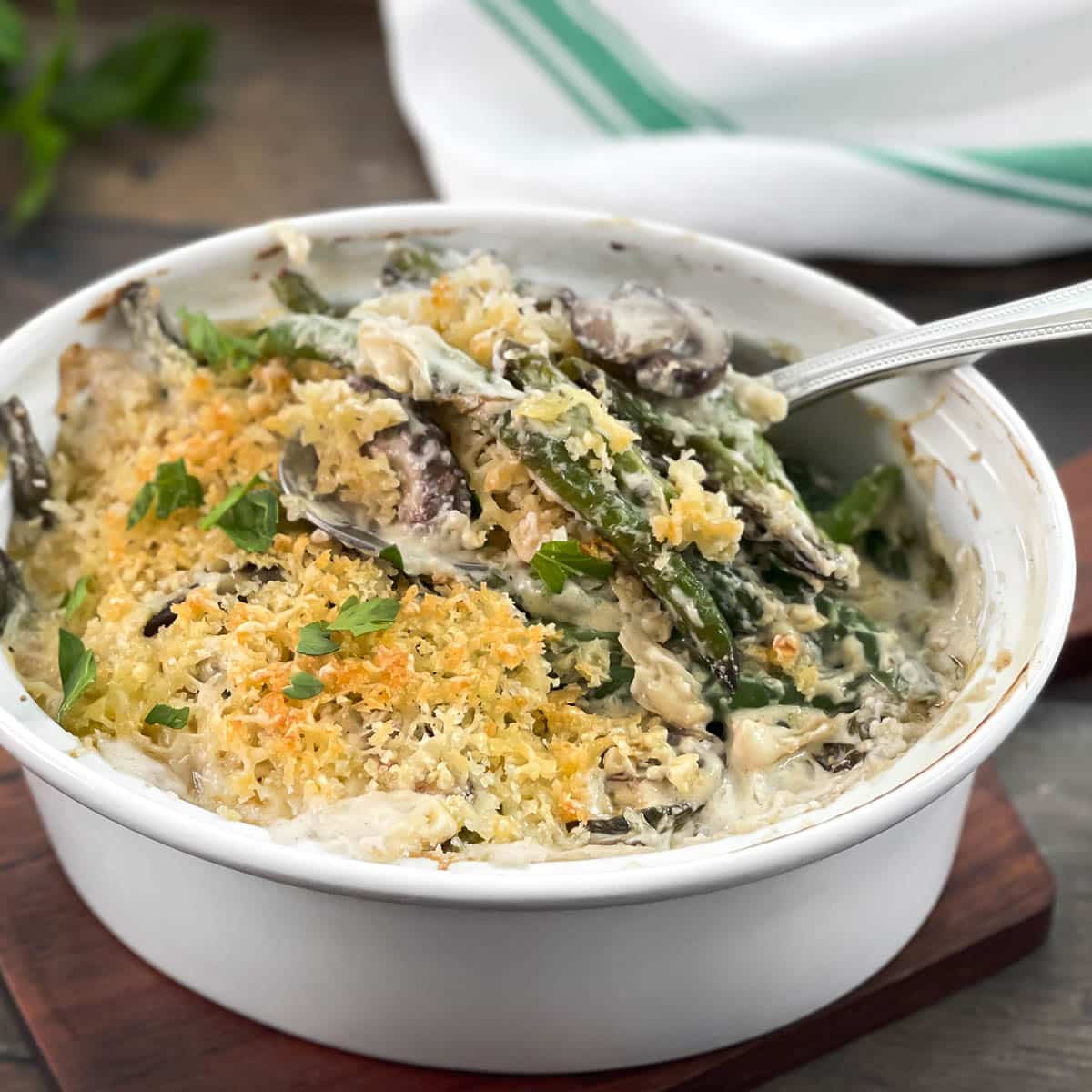 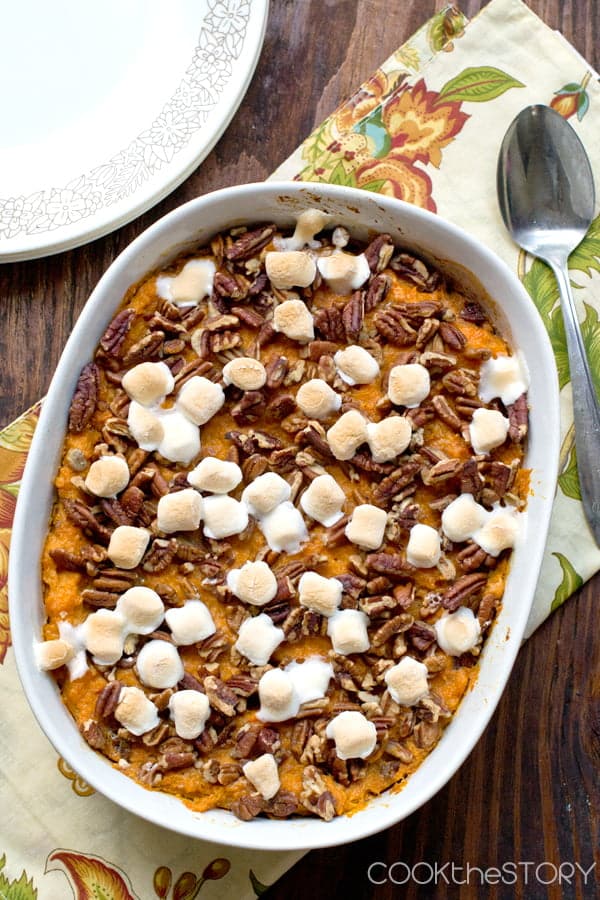