Chicken Shawarma is juicy with delightful seasonings. Learn how to make it in your Instant Pot. It’ll be deliciously ready before you know it! This post is sponsored by Pompeian. 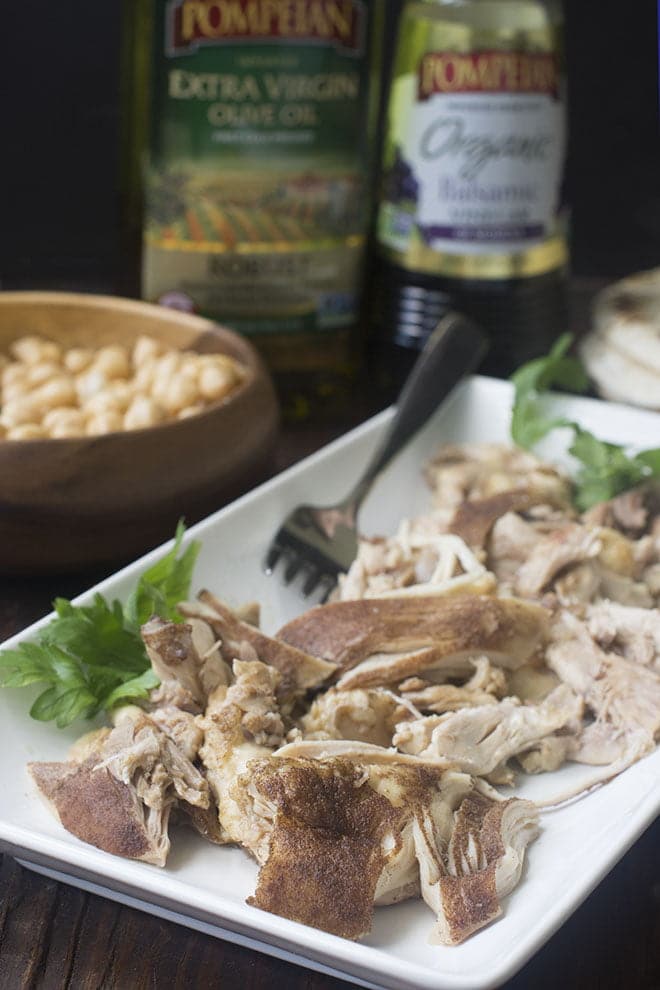 I’ve been experimenting with my Instant Pot a lot lately. My most successful attempts so far have been tender, juicy chicken thighs. I put 4-6 of them in with about 1 cup of liquid (chicken stock, some lemon juice, a drizzle of olive oil) and set the steam time for 20 minutes. The pot heats up and then cooks for 20 minutes and then gives me succulent chicken.

To use this chicken meat on busy weeknights, one of the easiest things to do is to put it into a sandwich or wrap. I decided to give my sandwich fixings a Middle Eastern spin and this is what I came up with.

Traditionally, shawarma is sliced meat that is stacked on a skewer and cooked on a vertical rotisserie. You’ve probably seen them spinning in your favorite Middle Eastern restaurant or food truck. The original meat of choice for this was lamb, but today you can find beef, veal, turkey, and chicken as well.

Spices like cumin, coriander, cayenne, and turmeric along with some warm spices like cloves, nutmeg, and cinnamon are often used in the seasoning blend for these meats. The shawarma meat is then usually served in some sort of wrap or gyro.

Today, we’re modernizing this dish by cooking our deliciously seasoned chicken in the Instant Pot.

First, I seasoned the chicken thighs with cumin, cinnamon, cloves, and cayenne. 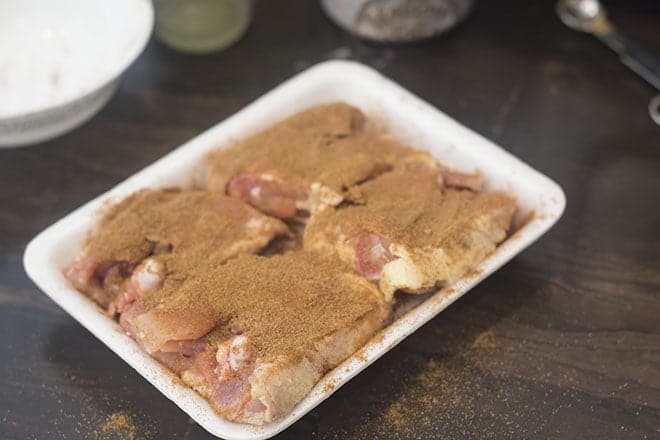 This combination of flavors reminds me of the seasonings used in shawarma meat so it’s perfect for this recipe.

Then I put some lemon juice, water, and flavorful olive oil into the Instant Pot. 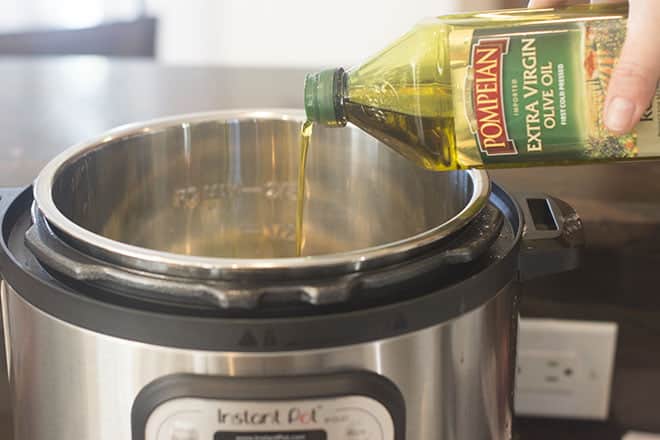 The seasoned chicken went in next. It won’t be submerged in the liquid. That’s exactly right. The seasonings on the top should not be washed off. 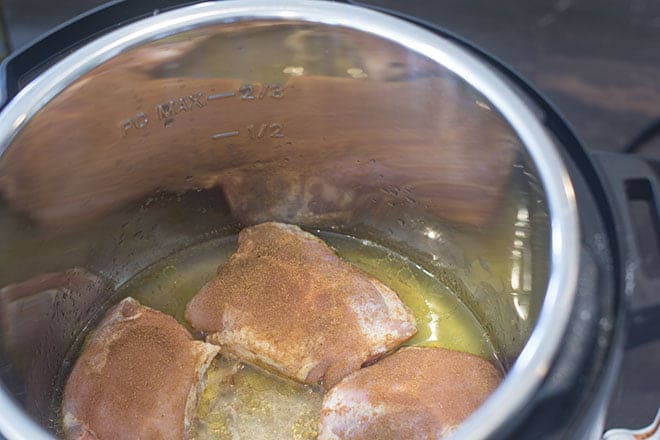 Set the Instant Pot to the steam setting and put it for 13 minutes. The Instant Pot will heat up and then cook for the set time. Follow the instructions on your Instant Pot user manual to be safe.

While the chicken cooks, get your other sandwich fixings ready. I like to do this on on pita so I warmed up some pita bread. To go into the pita with the chicken, I sliced cucumbers and red onion. A bit of Greek yogurt, tzatziki, or hummus makes for the perfect sauce.

To serve alongside the chicken shawarmas, I made some simply dressed chickpeas. Literally there were three ingredients going on here: canned chickpeas, balsamic vinegar, and salt. That’s it.

The key is to go with a good balsamic vinegar, one that you really like the flavor of. 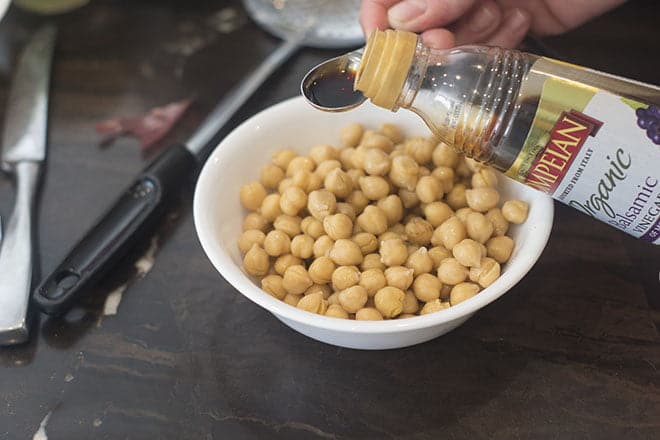 So you add the balsamic and a pinch of salt to the chick peas, stir, and then serve them with your chicken and pitas. So easy and simple and good!

After the 20 minute timer on the Instant Pot ends the chicken will be cooked through. Follow Instant Pot instructions for opening the unit when it has been pressure cooking. I always wear oven mitts for this and keep my face far from the steam spout! 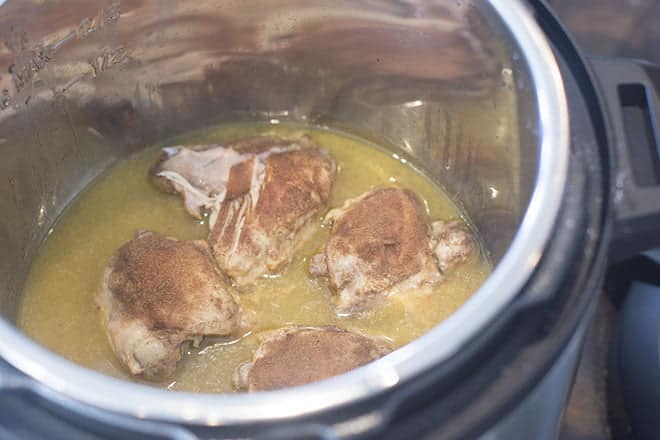 Remove the chicken to a plate. Remove the bones and then shred the meat with a fork and knife. 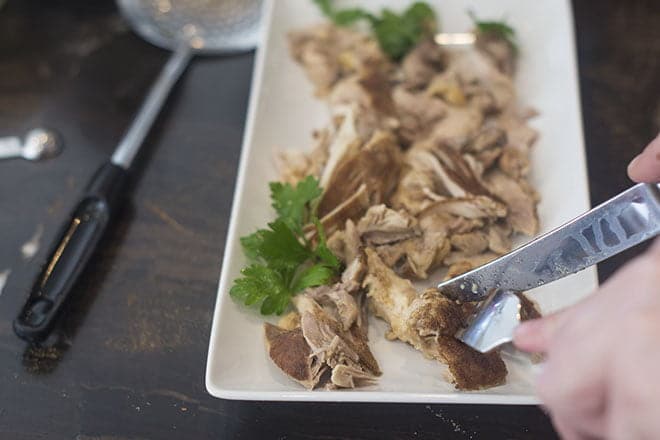 Serve the chicken with some warmed up pita, sliced vegetables, Greek yogurt, tzatziki or hummus, and the balsamic chickpeas for a perfect weeknight dinner with a new international spin. 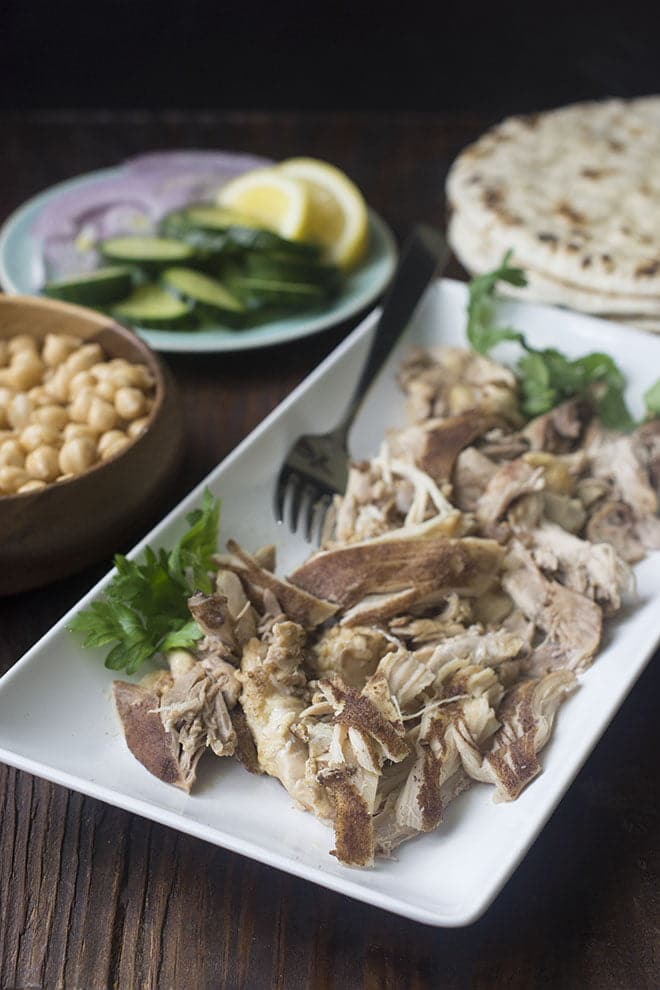 Chicken shawarma is juicy with delightful seasonings. Learn how to make it in your Instant Pot.

Disclosure: This post is sponsored by Pompeian. All opinions are my own.

This post originally appeared in March 2018 and was revised and republished in October 2020. 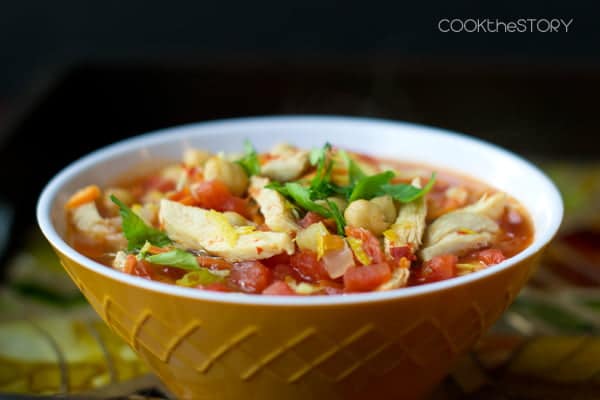 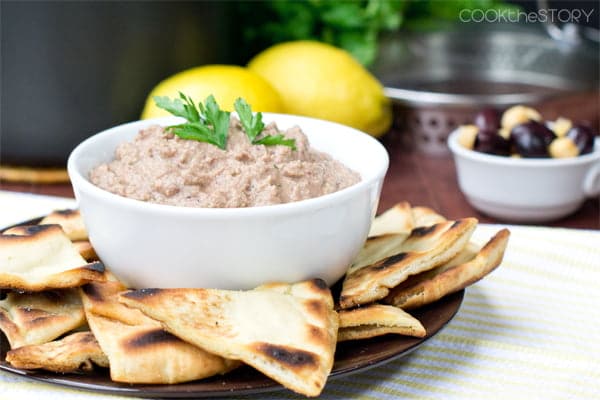 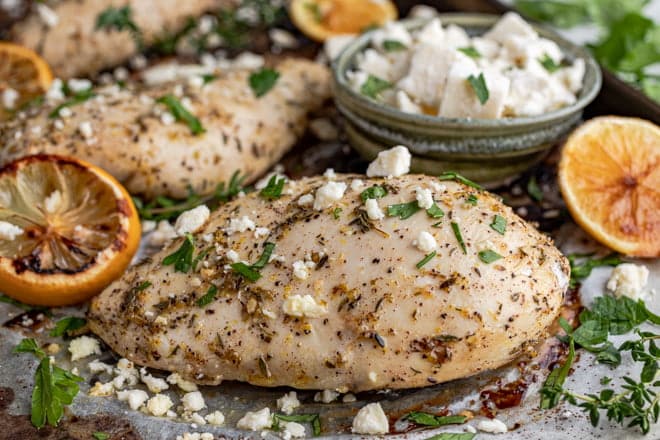 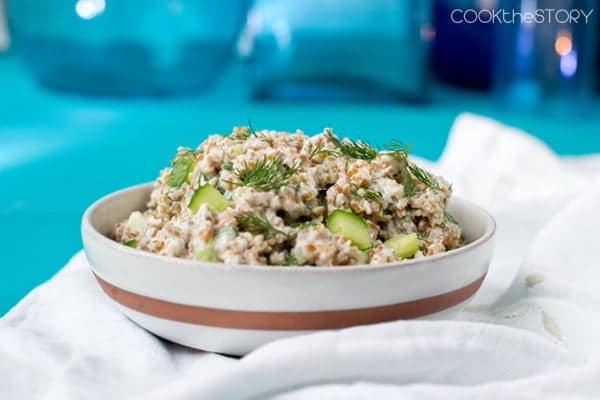