(It’s an excel file. My hope is that you can print it as is or use it as a template for your own meal plan. Note: there are links below the calendar to the recipes that are used in the plan.)

We’re five days into The Plan already and I thought I should be honest and tell you just how far off track we’ve gone.

Leftover Crisp and Unctuous Pork Belly on sandwiches with loads of red onion, spinach and mushroom salad. Check! Yeah, we managed to stick to plan the first day. But then, who wouldn’t when it involves pork belly?

The Hubs somehow decided that hotdogs on the campfire were too complicated for the night before his first day back at work. He therefore convinced me to order pizza instead. Not a big deal since I doubt pizza is any worse for us than hotdogs. But now I have 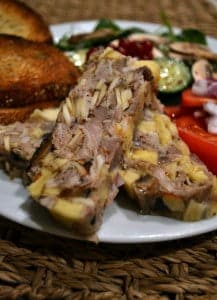 Easy to stay On Plan when dinner is Homemade Pork Belly Paté with Salad, Garlic Toast and Red Currants

these wieners to use up. Lunches, I guess. *sigh* So much for a healthy start to the year (which wasn’t possible anyways really. Not because of the pizza or the hotdogs but because of all that Pork Belly!).

Leftover Pork Belly Country Paté (did I mention we had a pork belly feast for New Year’s Eve?). Of course we stayed on plan and gobbled it up. Oh so good. Wish there was more in the fridge right now so I could have some for breakfast.

Today was the day that we were supposed to get on track and start being a bit healthier. Of course that didn’t go as planned! Why not? On Monday I had some girlfriends over with their kids for a lunchtime play date. I made a Chickpea, Spinach, Green Pea, Alphabet Noodle & Egg Noodle Pasta Salad for our lunch. I think I must have been expecting 30 people instead of three little women and their toddlers since there was enough for everyone’s lunch, lunch for us the next day AND a dinner for us. I of course could not be wasteful and we had to use up all that whack-job pasta salad. But I couldn’t face eating it again and again as is. To make it more appealing I warmed it up, added bacon, some cream and tons more spinach, wilted in bacon fat of course. Did I mention that we’re trying to be healthier this year??? *double sigh*).

Seems we’re off by just a day now. Last night we did have shrimp, but not on pasta as planned since we’re sick of the stuff after all that pasta salad (see Day 4). Instead, I quickly nuked some potatoes, chopped them into big chunks, tossed them with a bit of oil, crisped them under the broiler and then sprinkled them with sea salt. Shrimp cooked in a bit of butter with loads of garlic and capers over crunchy salty potatoes, arugula salad on the side…It was pretty darned good. Only problem, I didn’t write down what I did or take any pictures. Recipe development plans shot. Oh well.

I’m planning to do Seasonal and Savory (formerly Foodie Road Show)’s Gallo Pinto. Problem: Yesterday morning I woke to a screech from the kitchen. The Hubs swears that when he opened the fridge an entire carton of eggs jumped out and tried to attack his feet. His feet seem to have survived but the eggs did not. To make the Gallo Pinto I therefore have to hit the grocery store today, which was, you may recall, what I was trying to avoid by making the plan. Oh well, we’re out of wine so I probably would have gone anyways. (“Probably.” Ha! Who am I kidding?)

We’ll do the oven fried basa fillets. Now, let’s just pretend that The Hubs is not a carnivore and that he’ll be ecstatic about fish for dinner on Saturday after having had a bean-and-egg-based dinner on Friday. He won’t notice, right?

In summary: Week 1 will require an extra trip to the grocery store and has us off track by at least a day. Has it improved my life in any way? If by “improved” you mean an increase in the consumption of pork and of bacon fat, then YES! For all other definitions of “improved” the answer, sadly, is no.

3 Responses to “Here’s The Plan, Man”