These Asian beef ribs start with a Chinese five-spice powder rub and are finished with a maple-soy sauce. Rich and meaty. And yes, finger licking good.

Did you know that Chinese five-spice powder doesn’t contain five spices? Well, sometimes it does. But it can contain as many as seven or even more.

Five spice powder is particularly good with fatty meats. It cuts through the fat but also enhances it and brings so much flavor with it.

These beef ribs are rubbed with a mixture that contains five-spice powder and then they’re slow roasted until the meat is so tender it nearly falls off the bone. But not quite. You need it to stay attached so you can grill it  later.

Then the ribs are brushed with a maple-soy barbecue sauce. At this point you can cool them to grill later on (up to 24 hours later). Or you can put them on a hot grill to heat through and get some char. 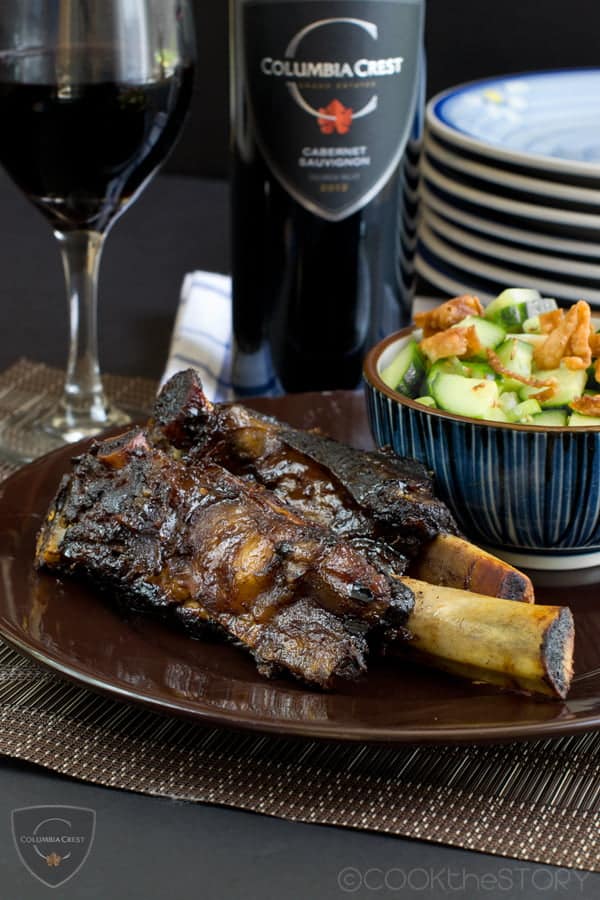 To go alongside these ribs I wanted something to cut through all the rich sweet flavors. I therefore suggest this cucumber salad. It’s cucumbers, green onions  and sesame seeds with a light dressing. And then you top it with something crispy. I give instructions below for frying your own wontons but you can use the crispy Chinese noodles from the grocery store to make it easier.

To go with this flavorful meal I’ve chosen a robust wine, the the Columbia Crest Grand Estates Cabernet Sauvignon. With aromas and flavors of dark red fruits, this bold style Cabernet Sauvignon displays fruit complexity and structure – a wine that is perfectly paired with beef. 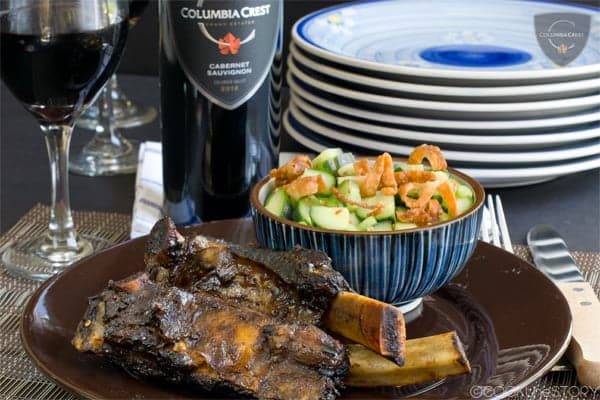 And now, here’s my Asian Beef Ribs with Cucumber and Sesame recipe:

These Asian beef ribs start with a Chinese five-spice powder rub and are finished with a maple-soy sauce. Rich and meaty. And yes, finger licking good.
The simple cucumber and sesame salad is the perfect accompaniment to a rich and meaty dish. If you don’t want to fry your own wontons, buy a container of crunchy Chinese noodles at the grocery store and use those instead.

For the Cucumber and Sesame Salad

For the Cucumber and Sesame Salad

*The info about Chinese five-spice powder comes from Serious Eats, about.com and Wikipedia.

Disclosure: I was paid by Columbia Crest Winery to develop this recipe to pair with their wine, to photograph the recipe, post it on my blog and promote it on social media. They also provided me with wine to help develop the recipe and determine a good pairing. All opinions are my own.