This Dessert Pizza is loaded with apples and almonds and then drizzled with a cream cheese icing that makes it taste like cheesecake. This recipe is sponsored by The New York Apple Growers Association.

Lately I’ve been telling you about a new variety of apple on the market. It’s called a SnapDragon.

The SnapDragon is the kind of apple that you want to grab cold out of the fridge and chomp right into. It has a sweet bright flavor and a good crispy crunch.

But it’s also an apple that holds up well to cooking. It gets soft relatively quickly but holds its shape and doesn’t turn to mush.

When I started testing out how best to cook with this new apple, I asked my son what I should try. Apple pie? Appke cake? Apple crisp? 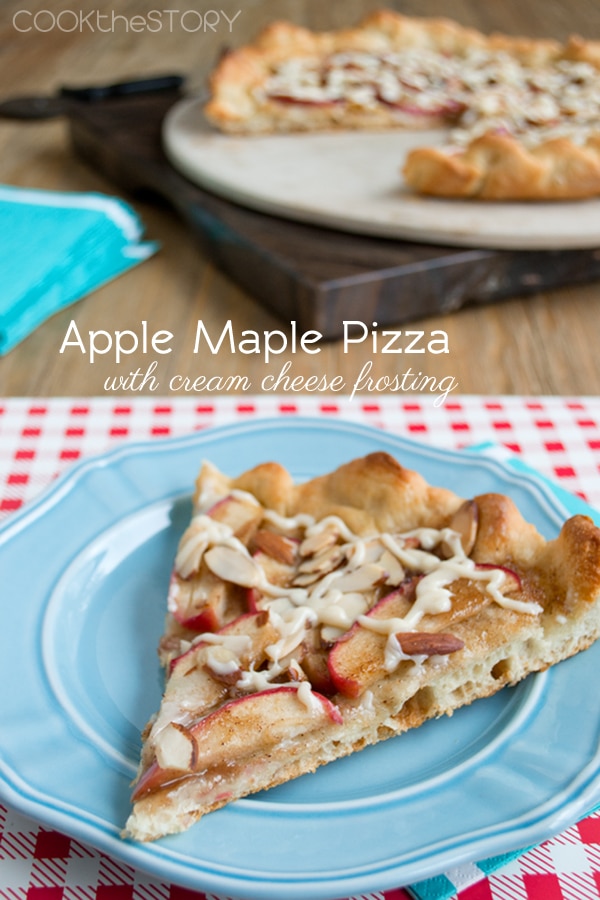 You can make your own homemade pizza dough for this recipe or buy store-bought pizza dough. I prefer the balls of dough sold in the bakery of my grocery store but the tubes of dough found in the refrigerated section near the biscuit tubes will work in a pinch.

To make the dessert pizza, you roll out the dough (if it’s not rolled) and put it on a pizza pan. Then you make a quick and easy maple sauce to spread on the dough. Top it with sliced apples in a single layer. Scatter with almonds and bake.

While the pizza is cooking you mix together a simple cream cheese frosting. When the pizza’s cooked, drizzle it with half the frosting. Why only half? So you can dip the crusts in the rest!

If you live in the North-Eastern US, look in Wegmans for the SnapDragon. The rest of us will have to use a different sweet and crunchy apple until the SnapDragons find their way to us. Soon, I hope! 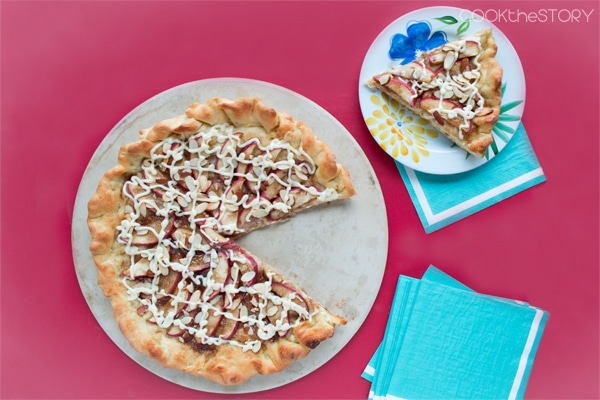 This Dessert Pizza is loaded with apples and almonds and then drizzled with a cream cheese icing that makes it taste like cheesecake.

Disclosure: The New York Apple Growers Associating hired me to develop recipes for their apples and photograph them for use on their website and promotional materials as well as to use on my site and in social media to promote the apples. All opinions are my own.